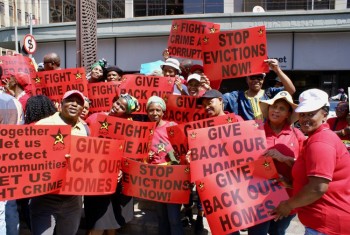 An unlikely alliance of white farmers, the SA Communist Party, trade unions and individuals whose homes have been repossessed by the four major banks came together outside the South Gauteng High Court on Friday to call for a freeze on evictions. This is the start of a "mass rolling action" campaign that is now being taken countrywide, says GroundUp.

Several hundred people gathered outside the High Court in support of a R60-billion Constitutional Court class action bid to change legislation to prevent the sale of re-possessed houses at very low prices. The protesters wanted to attract the attention of the judges of the High Court, where eviction orders are generally issued. The sale of re-possessed houses at sheriffs’ auctions without a minimum price has resulted in homes being sold for as little as R10, leaving the home owner to repay the mortgage shortfall.

More than a thousand applicants have joined the class action suit according to the Lungelo Lethu Human Rights Foundation, the main architect of the case. The applicants are asking the court to order the banks to refund an estimated R60 billion in home equity that was foregone as a result of repossession of homes by the banks over the last 20 years. Home equity is the difference between the market value of a property and the amount still owing on a mortgage loan. The current High Court rules allow homes to be sold without a reserve price, meaning they can be sold at auction for a fraction of their market value, which represents a potential loss to the home owner. The Constitution guarantees the right to adequate housing, dignity, and fair administrative justice, and prohibits arbitrary deprivation of property.

“We are sending a very clear message to the banks, the sheriffs, and the courts, particularly the masters of the courts, that we will not tolerate any more evictions of people from their homes,” said Solly Mapaila, second deputy general secretary of the SA Communist Party (SACP). “This is just the start of a mass rolling action campaign to stop fraudulent evictions by the banks.”

Mapaila called on South Africans to stand their ground when faced with eviction, and urged the police to stop providing support for evictions that he said were frequent in working class areas.

“In the apartheid years they called it forced removals, when the government was evicting black people from their homes,” said King Sibiya, head of the Lungelo Lethu Human Rights Foundation, which organised the protest. The Foundation provides legal support to thousands of evictees, mainly in Gauteng. “Now they call it evictions, but this time we are fighting the banks. We will no longer tolerate cases where people are evicted from their homes unlawfully – and in most of the cases we have investigated, these evictions were indeed unlawful. People like Ernest Mashaba and his family were evicted four times from their home in Katlehong, despite dutifully paying off their mortgage bond.”

“Today, bank robbing is not about someone breaking in from outside the bank, but banks robbing their own clients,” said Sarel van der Westhuizen, representing several farmers and clients from the Potchefstroom area.

Sibiya said the Foundation was in possession of evidence of more than 900 cases where homes were bought at auction for less than R100, often by the lending bank itself. This is made possible by High Court rules that allow repossessed homes to be sold at sheriffs’ auctions without a reserve (minimum) price.

“This is more than a fraud,” he says. “It is a gross human rights abuse. If our Constitution is to have any meaning, these outrageous abuses must be stopped. We are calling on the government to bring an immediate halt to all home evictions, and within one year to introduce new legislation to force repossessed homes to be sold at market value.”

Marius Marais, CEO for FNB Home Loans, commented: “FNB is aware of the allegations by Advocate Douglas Shaw and will address them formally once tabled before a court.”

Standard Bank spokesperson Ross Linstrom said: “We are aware of the matter. As this is an ongoing matter before the courts we are not in a position to supply further comment.”