A shocking judgment that cannot be allowed to stand 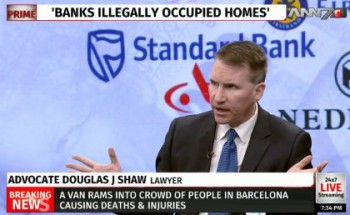 The Standard Bank v Nkwana case recently decided in the Pretoria High Court seemed to be a major step back for home owners facing repossession and eviction. The case was argued on behalf of Nkwana by Lawyers for Human Rights, and will almost certainly be appealed - especially the court's ruling that it was okay for banks to continue selling repossessed properties for a fraction of their market value. This absurd judgment prompted a response from former public protector Thuli Madonsela: "With due respect to the court, I consider this judgment to be grossly unjust and inequitable. It is as a setback regarding social justice. Should this matter be taken on appeal, it would be great if all those concerned about social justice join in as amicus curae (friends of the court)."

For many lawyers involved in social justice, this was a reprehensible judgment. The judge decided it was up to legislators to change the law to stop banks selling properties for R100 or R1000. Actually, no, citizens rely on the courts to uphold their rights. That's what they are there for. Being deprived of equity in one's home is a violation of one's Constitutional rights against arbitrary deprivation of property. We expect the courts to uphold these rights.

Advocate Douglas Shaw (pictured), who is bringing a R60bn class action suit against the four major banks for the very practices which the Pretoria court decided was acceptable, weighs in with some thoughts of his own.

Why Nkwana was decided wrongly

Nkwana came before the court in April 2018. In that case it was argued that the pre Dec 2017 rule 46(12) was not unconstitutional because there was no evidence before the court that a reserve price would lead to a higher price.

Standard Bank’s evidence was effectively that a force sale necessarily yields a lower price than a voluntary sale. That may be true but forced sales around the world yield prices much closer to market value than ours do. Forced sales around the world yield rarely are allowed to yield prices of 90% off, not were they allowed to do so in our own Roman-Dutch legal history. In our past, the sale price needed to be confirmed to prove that it is reasonable.

The second argument from Standard Bank is that buyers fear the liability of rates and taxes and so offer lower amounts. That is certainly true, and has been changed in the new rules. Nevertheless, that is an argument for holding the rule unconstitutional also for that reason, not for saving its constitutionality.

Thirdly, the prospect of having to evict tenants from the property is suggested as another reason why prices are lower. However, if debtors were given a fair market price for their property, which would usually in a working system be over the bond, they would move out quickly. It is because the debtors feel an injustice has been done and are justifiably angry that they refuse to leave.

Court had no guidance on what reserve price should be

The court found no evidence was produced as to what the reserve price should be based on and for that reason alone the case must be dismissed. Reserve prices must of course be based on the market price of the property.

The case seemed to rely on other cases inappropriately. Mouton was a case that was never argued by the debtors due to a shortage of funds ( I know because I would have been the one arguing it)  and the judgment is thus based only on the bank’s point of view.

It is true that more is needed to establish proper prices than simply the setting of a reserve price. Reserve price in itself is not enough, we need a combination of techniques to restore constitutionality. Certainly, we should return to our historical practice of confirming the sale after the sale and not allowing sales below a certain percentage of the value, say 10 or 20% below, except in exceptional circumstances. The best process would be that they are automatically rejected below this amount and then the bank must approach a court to justify why they should be allowed regardless, such as because the property is in a poor state of repair.

Standard Bank are right, however, that sales without reserve will attract more interest. Of course, they will. Who would not wish to pick up a property for 90% off! But it is wrong to allow this. Yet, attracting more interest from buyers, in other words, creating more liquidity in the auction market is key to higher prices. And here we find further problems with our rules. We require a deposit of 10% of the price of the property. That one rule reduces the number of buyers by 99.9%. Very few  South African except professional buyers with access to capital have R200,000 available to put down for a deposit. If this amount was reduced to 1% or better 0.1% then thousands of times as many people could participate. Certainly, some people would default on their purchases, but most people would prefer not to lose thousands of rands and would only bid for properties they wanted to keep. Thus, taken together with the failure to have a compulsory reserve price (the new rules only give the court the ability but not the obligation to set one), and the other aspects we describe below, the rules are unconstitutional.

A second important matter is the way the auction is conducted and here we may profitably compare the sheriff’s auction system prescribed by the rules with our private auctions which deliver much higher prices.

The learned judge misses the point when it come to property but maybe the point wasn’t argued properly in the papers. The property of which the debtor is arbitrarily deprived is not his house. This could also be an arbitrary deprivation if there were other options, that it was not a last resort. However, it may have been a genuine last resort in the case on Nkwana. However, the clearer example of arbitrary deprivation of property is the equity in his property, not his house as such. It is not necessary for sales in execution that the person should lose the equity in their property. Houses can be sold for more.

However, the judge is probably right when he says that it is the legislature that should put in new laws rather than the necessary changes being rolled out by court orders, but if so, he should have instructed the Minister to do so.