2017: the year the tide turned against corruption and lawless banks 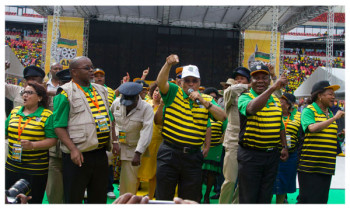 2017 will go down as the year the tide turned against corruption. President Zuma will soon be gone and his successor, assuming it is Cyril Ramaphosa, will start to rebuild the ruling party around traditional ANC Charter values of human rights and respect for voters. He will have to if the ANC has any hopes of maintaining a majority in the 2019 elections. 2017 was also a year in which the courts started to rein in lawless behaviour by the banks, making it harder to chuck financially distressed customers out of their homes.

It’s that time of year again when we celebrate Christmas and recount the achievements and follies of the year. The ANC goes into its elective conference this weekend to pick a new leader, with Cyril Ramaphosa taking the lead in several polls. If elected, he has one monumental job ahead of him to slow the runaway train of corruption and graft that has characterised the ruling party elite under President Jacob Zuma.

We’re a bit better informed about events now, thanks to some sterling work by Jacques Pauw whose book The President’s Keepers seems to have been read by just about everyone with an email address (thanks to the soft copy version that did the rounds, in case the security establishment tried to pull it). It’s a depressing read for the most part, but fall-down funny in places. It concludes that Zuma had to become president to stay out of prison for more than 700 charges of corruption. This utterly compromised man allowed the Gupta family to capture state-owned companies and make ministerial appointments. We learn that Zuma would not submit his tax returns before or during his presidency, lest the source of his funding became known. He was surrounded and pampered by criminals and gangsters. It’s astonishing just how close these guys managed to get to the presidency.

We also learn that here is a man who has never had an honest job in his life, and whose bills were paid by others – including former President Nelson Mandela who gifted him R3m to clean up his debts, and get his affairs in order. This didn’t last long. Around the time Zuma dethroned Thabo Mbeki as leader of the ANC, he tried to open a bank account with Absa Bank.

From the President’s Keepers by Jacques Pauw: “Benefactors showered Zuma with white envelopes while banks were at his feet. When the cash-starved politician approached Absa in the late 1990s to open an account, his bad credit record with Standard Bank and Nedbank should have disqualified him. But the business centre manager wrote in a memorandum that Zuma was likely to be elected South Africa's deputy president soon and that his ‘bank balance was the last item on his mind, with more important matters regarding the country and the province to focus on’

Surely a case of reckless lending if ever there was. In any event, Zuma will soon be history but may still pull strings from behind the scenes, particularly if his former wife Nkosazana Dlamini-Zuma wins the race for leader of the ANC. She will have her hands full keeping her ex out of court and away from the mountain of charges against him.

One of the great victories of the year is the triumph of the free press in SA against an onslaught from the dissemblers in government. Bell Pottinger, the PR firm, is no more. It’s racially charged campaigns against “white monopoly capital” and in favour of “radical economic transformation” (code for theft) have been exposed for what they are – attempts to deflect attention from the crooks in government.

The Democratic Alliance has taken over the running of Joburg, Pretoria and Port Elizabeth (it’s run Cape Town for much longer) and has been drip-feeding stories of corruption under the previous ANC administrations to the voters. Another book by Crispian Olver, How to Steal a City, details how Nelson Mandela Bay “was entirely captured and bled dry by a criminal syndicate.” Olver is an ANC insider sent in to clean up corruption in the city. What the criminals wanted were the tenders so they could pillage the public purse: building, transport, you name it, they had it all wrapped up. Which explains why warehouses full of buses remain unused and thousands of houses paid for by the public taxpayer remain unbuilt. The scale and audacity of the theft is breathtaking. Olver is a brave man, who admits he had to have bodyguards to protect his life while investigating the criminal syndicate that took over the city.

Another victory is the call by the Parliamentary Standing Committee for Public Finance for an inquiry into banking abuses, including the use of “bouncers” to repossess cars without following the correct legal process, the repossession of houses and other assets without issuing so-called Section 129 notices (in terms of the National Credit Act) which notifies the debtor that legal action is about to commence unless the arrears are settled, the issue of summonses by banks without attaching the original documents purportedly signed by customers. When challenged on this, the banks claim the originals were destroyed in a fire. This fire should have been designated a crime scene, since banks were able to foreclose on thousands of South Africans with recreated documents that – astonishingly – have been accepted by the courts.

And on this basis an estimated 100,000 homes have been repossessed by the banks since 1994. One of the oddities of SA law is that repossessed houses could be sold at sheriffs’ auctions for a fraction of their worth because the rules specifically disallowed reserve prices to be put in place. So in addition to losing a roof over their heads, bank customers were left with staggering debts to the bank. This is a form of debt slavery that most never recover from. The good news is this type of behaviour by the banks is no longer going to be tolerated by the courts. The new court rules require a reserve price to be put in place, so we will no longer see homes being sold for R10 and R100 as we have seen in the past.

Credit must go to activists such as King Sibiya of the Lungelo Lethu Human Rights Foundation and Advocate Doug Shaw, who have been calling the banks out on this nonsense for years. In November, the government gazetted new court rules which provide far greater protection for home owners – any application for repossession and sale in execution must include market and municipal valuations for the property. And banks will have to show that they have tried other less aggressive ways to recover their outstanding loans.

The law is at last recognising that the Constitutional right to dignity and housing takes precedence over a bank’s right to recover its loans. This will force banks to take a more humane approach to loan recovery, and provides far greater ammunition to customers in periods of financial distress.

I predict that there will be a few more major victories in the courts for abused customers. I am aware of several that are now close to finality. These victories will forever change the way the banks deal with customers.

It wasn’t just the banks that were dealt a snot-klap. Steinhoff’s accounting shenanigans has shown again that we should not always trust what we are told by the gatekeepers, such as the A-list accounting and law firms. KPMG and McKinsey were neck deep in Eskom’s corrupt activities, and have suffered dearly for their sins.

So there is plenty to celebrate as the curtain draws on 2017.

New court rules make it harder for banks to repossess homes for a pittance
How to free yourself from debt slavery and stop paying bank interest, bank charges and collection costs
Forget debt counselling - manage your own debt and get out of slavery
How to defend yourself against the banks
Here comes the seasonal blizzard of summonses from the banks
How to defend your home against bank foreclosure
How the banks are denying your Constitutional right of access to justice