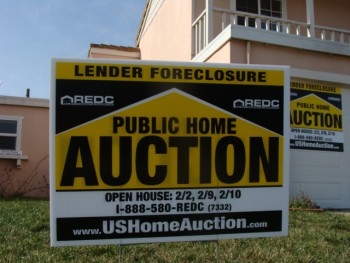 A recent study of home repossessions puts SA among the worst – if not the worst – in the world. The enthusiasm with which SA banks rush to repossess homes is described as “medieval” and cruel, writes Ciaran Ryan in Moneyweb.

SA might claim to have one of the most liberal Constitutions in the world, with supposedly strong legal protections against arbitrary deprivation of property, but tell that to the more than 5,000 people booted from their homes each year by the banks, and the 15,000 served with sale in execution notices, which is a prelude to sale at auction by the sheriffs.

Some years the figures are much higher. A recent study of home repossessions in SA by Advocate Douglas Shaw suggests 1% of the 1,8m mortgages in the country are summonsed by the banks each year after falling into default.  This figure is much higher than most other countries, including other developing countries.

SA’s rate of repossession on a per capita basis is four times higher than the average for the rest of the world and a shocking 20 times worse than countries employing best practice such as Denmark and Singapore. “This appears to clash with our South African constitutional ethos of human rights encapsulated in our constitution. With these aspirations South Africa would surely aspire to having one of the lowest rates in the world, not one that is even average,” says Shaw in a doctoral thesis entitled The Legality of the Law of Sale in Execution for Substantially less than Market Value in South Africa.

Shaw estimates that properties worth R5bn are sold each year in SA at an average discount of 40% to fair market value. This means that “in the last 20 years since the Constitution came into effect, about R400bn worth of damage has been done by sales in execution to the people of SA.”

This is because High Court rules specifically preclude the setting of a reserve price at auction. The same rules prevent estate agents from selling these properties. This opens the door to bid rigging by syndicates, who routinely pick up properties for a fraction of their market worth – in some cases for as little as R100.

Each day, the courts are crowded with lawyers representing the banks, attempting to obtain judgment against defaulting clients before proceeding to sell their properties at auction. Shaw’s study suggests SA’s medieval home repossessions practices are an affront to the Constitution and among the worst – if not the worst – in the world. To get a sense of this, you have to go to social media, where a growing network of angry, dispossessed South Africans vent their bile over supposedly corrupt judges and lawyers. One such network was People Against Lawyers and Liquidators, set up by Jonn Basson of Pretoria. Basson died of heart attack last year when the sheriff came to evict him from his farm. The liquidators continued to tally up his assets while his body was rushed to the hospital. Ironically, Basson had appealed the eviction order, which should have protected him against eviction.

A common complaint is that lawyers are in the pockets of the banks, or if they’re not, they soon will be. They charge outrageous fees and then drop their clients at the steps of the High Court, having suddenly found a better paying client in the form of the banks.

“What SA needs are new rules that are less damaging to the rights of those who are losing their homes,” says Shaw. “Calling our current laws medieval is actually unfair to the medievals. In Roman Dutch common law history, the judge had to confirm that the sale was for a fair price before it would go through.  Medieval laws were actually considerably better than the dreadfully draconian system that prevails in SA today.”

Other countries require banks to sell repossessed homes at fair market value or, if no sale has occurred within a reasonable time frame, at marginally lower prices. Many countries require estate agents to be involved in the sale. Others, such as the UK, require banks to reschedule debts to allow defaulting customers to get back on their feet and remain in their houses.

The Constitutional Court in Jaftha v Schoeman declared that banks should only sell at auction as a last resort and should find more creative ways to sell repossessed properties. Banks swear blind
they are using the auction process as a last resort, though the evidence suggests otherwise.

Shaw’s study investigated alternative mechanisms in other countries, such as court orders to reschedule the debt (as is common in England), the sale of a house with a gradually decreasing price commencing with the market price (either through an estate agent or a series of auctions) and having reserve prices to reflect this.  Such schemes are in place in other developing countries like Malaysia and South Korea.

The study examines the social costs of home repossessions: the indignity of eviction; the upheaval of families having to move, often into less desirable accommodation; children having to change schools; and the compounding effect of losing a home as well as a job. “There is the further problem of actual death and serious illness caused by the current practices. Mental illness has been found to increase after repossessions though not evictions from rental properties. Foreclosures have been found in one US study to result in depression, stress related illnesses and spikes in emergency room visits.” This study found that a 5% increase in foreclosures in one state was associated with a 25% increase in suicides for people aged 46 to 64.

Home repossessions affects South Africans of every race and income group. A group called Lungelo Lethu Human Rights Foundation is preparing a class action suit against the four major banks for what it says are the unlawful evictions of thousands of South Africans from their homes. It is also calling for:

·         A judicial investigation into these repossessions.
·         Properties sold in execution must be at market value.
·         Insurance must be clearly defined in terms of who bears responsibility for what (both long and short term).
·         Disclosure between the service provider or financial provider and the consumer must be clearly defined, as in the securitisation (or onward selling) of home loans, which is conducted in secrecy and is of questionable legality.
·         Proper township establishment is required to ensure services are rendered to communities. Some townships were never proclaimed by the Surveyor General, allowing Eskom and oil lines to traverse residential areas, and sewage to escape into rivers.
·         Consumer education is woefully inadequate and banks have been able to take advantage of financial illiterate customers. This has to be changed.
·         The various ombuds are neglecting their duty to protect the poor against abusive conduct in the financial sector.