Jonn Basson dies during raid on his farm by sheriff

Jonn Basson, founder of the social justice movement People Against Lawyers and Liquidators, died this morning after his farm east of Pretoria was raided by the sheriff of the High Court and liquidators. Basson had been fighting to stave off eviction from the farm, claiming he had been fraudulently liquidated. 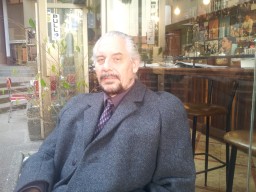 Jonn Basson (65) died earlier this morning after his farm in the east of Pretoria was raided by the sheriff and liquidators. Witnesses on the scene say he appears to have had a heart attack and hit his head as he fell to the ground.

According to an eye-witness at the scene, Jackie Kearns, the liquidators stood around his collapsed body taking inventory of his possessions. One of his tenants, seeing he was obviously in serious trouble, screamed at the men to call an ambulance. He was declared dead on arrival at the hospital. He was bundled into a vehicle and rushed to the hospital, with one of his tenants attempting to rescusitate him.

Kearns also reports that cash was stolen out of his wallet while he lay writhing on the floor. When this was brought to the attention of the liquidators, they promised to dismiss the offender, whose identity is unknown. Rolene Cornelius, one of the tenants, says the liquidators seemed uninterested that they had a dying man lying at their feet, and continued on with their work.

Basson, who set up a popular Facebook page People Against Lawyers and Liquidators, had fought a long-standing battle against his former wife, Louise, and Pretoria attorneys Tintingers, claiming they had  liquidated his company over a bogus claim delivered to an address where he would not receive it. You can read the story here. Eight months ago, Basson was days away from being tossed off his farm. The Pretoria High Court granted the liquidators an eviction order, which Basson had appealed. He was also preparing a Constitutional Court case that sought to make it illegal to liquidate a viable business, as he claims happened to him.

The irony is that Basson believed he had frozen the eviction process by appealing the eviction order, as stipulated in terms of Section 49(11) of the High Court rules. Supporters of Basson say the raid this morning by the sheriff and liquidators was completely unlawful in light of the appeal against the eviction order.

This latest tragedy comes just months after his daughter Vivienne died from cancer. For several months she was the driving force behind People Against Lawyers and Liquidators, having taken up the fight on behalf of her father who she believed had been defrauded of his life’s work. Friends and supporters of Basson have promised to keep his campaign for justice going, and to continue his fight in the Constitutional Court.

“They killed him,” says his former wife Jeanette Basson. "The stress was too much. Karma is a bitch and they will get their day.”

Basson’s two step-sons, working in Saudi Arabia and the UK, were devastated at the circumstances under which he died, according to Jeanette.

Witnesses say Basson’s ex-wife Louise and boyfriend were seen on the property today taking inventory of his possessions. Says Jeanette: “She marched off with property that does not belong to her and I am flying up to Pretoria tomorrow to arrange Jonn’s funeral and to lay a charge of theft against Louise and whoever else was involved in this disgusting and heartless act.”

“These are despicable people with no heart,” says Yvonne Oberholtster, who is also involved in a Constitutional Court fight seeking to overturn her own liquidation while under debt review – which has since been declared unlawful. Basson had assisted Oberholtster in preparing her case which is due to come before the Constitutional Court later this year.

The sheriff and liquidators carted off several truck loads of Basson’s possessions off the property. He also had a number of animals and exotic birds on the farm.

Attempts to speak to the sheriff and Corporate Liquidators were unsuccessful.