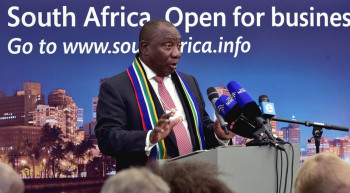 SA is being blasted by the foreign press, with the Wall Street Journal calling President Cyril Ramaphosa an imitation of Robert Mugabe. The New York Times climbed into deputy president David Mauza, former provincial leader in Mpumalanga, for the sad state in which he left the province's public services. According to current and former ANC officials, he siphoned off money from schools and other public services to buy loyalty and amass enormous power, making him impossible to ignore on the national stage and putting him in position to shape South Africa for years to come. The Times wonders how well this sits with President Cyril Ramaphosa's campaign to end corruption?


Then the Wall Street Journal (WSJ) had a go at Ramaphosa: "South Africa needs another enlightened leader like Nelson Mandela, but it keeps electing imitations of Robert Mugabe. President Cyril Ramaphosa confirmed recently that his government plans to expropriate private property without compensation, following the examples of Zimbabwe and Venezuela.

"Mr. Ramaphosa says he wants “land reform” to “unlock economic growth, by bringing more land in South Africa to full use, and enable the productive participation of millions more South Africans in the economy.” In his telling, South Africa’s ills are related to the proportion of whites and blacks tilling the soil, not the economic mismanagement of predecessor Jacob Zuma or the ruling African National Congress (ANC)."

The WSJ adds that supporters of expropriation claim black South Africans own less than 2% of rural land, and less than 7% of urban land, thanks to apartheid-era policies. But the government’s 2017 land audit used questionable data and underestimated land returned to blacks since the ANC won power in 1994. The Institute of Race Relations estimates black South Africans control 30% to 50% of the country’s land.

Says the WSJ: "Mandela insisted that land reform is best achieved through a 'willing buyer, willing seller' principle, as it is in other democracies with a strong rule of law. When polled, the vast majority of blacks prefer cash instead of titles. Many black South Africans have streamed into cities to find jobs and better schools for their children.

"But the ANC’s Zuma-era economic follies left many of these migrants jobless, and sent crime rates rising. South Africa’s economy shrank 2.2% in the first quarter, as investors and capital fled. The opposition Democratic Alliance now governs Cape Town, Johannesburg and Pretoria. Mr. Ramaphosa is promising more government spending to regain public support, but snatching private property is about as destructive a policy as there is. The ANC was founded as a revolutionary party, and the tragedy is that it won’t let the revolution end.

The New York Times returns to David Mabuza, and his spendthrift ways in Mpumalanga.

"Over the years, Mr. Mabuza’s province also became known as one of South Africa’s most dangerous. Nearly 20 politicians, most from inside the A.N.C., were assassinated in the past two decades, some after exposing graft in public works projects.

All the while, Mr. Mabuza’s political career flourished. He attracted legions of new A.N.C. members with government contracts, cash handouts and even KFC meals, according to current and former party officials.

His sweeping recruitment drive turned his relatively insignificant province into the A.N.C.’s second-biggest voting bloc. Under the party’s delegate system, his territory became more influential than even Gauteng, the province that includes Johannesburg and Pretoria, with a population three times the size and an economy nearly five times as big.

Now, critics contend, Mr. Mabuza’s role as the second-most powerful politician in the country casts doubt on the legitimacy of the new government and its bold assertions that the ANC is turning the page on corruption."

Mabuza's tenure as education minister in the provice turned a 46% matric pass rate into a stunning 72% the next year - if you can believe that. Then it turned out that cheating was rampant and the actual pass rate was below 53%.

All in all, a bad week for SA in the international press. Expect more of this as Cyril pushes through on land expropriation and turns it into a divisive racial issue.