Zim election: it's neck and neck 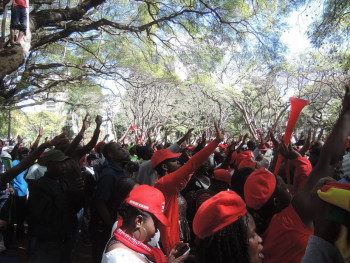 Zimbabwe's first post-Mugabe election looks like a neck-and-neck race between President Emmerson Mnangagwa's Zanu-PF and the MDC's Nelson Chamisa. MDC parliamenarian Eddie Cross looks at a numnber of potential outcomes, including the possibility of a coalition in the event there is no clear winner. We also look at Al Jazeera's coverage of the lead-up to the elections.


In the past four weeks I have tried to envisage a future for Zimbabwe which embodies what I regard as the fundamentals for recovery and growth. What I need to do now is to argue the case that Monday might just be the beginning of a long hard road for this country and its people.

The hurdles in front of us are clear, first we must have a peaceful, well organized election on Monday with about 4 million people voting. A quick result in a transparent manner and acceptance by both main Parties of the result. That is hurdle one.

Then we need the endorsement of the results by key observers who have been here for the past two months and are well aware of all the nonsense that goes on behind our closed doors. If we fail to get that endorsement then we are in trouble because we need the international Community to, at the very least, say it was not perfect, many shortcomings, but the outcome was democratic and acceptable. Only then can we expect the kind of support we need for the new government to begin to repair the damage left behind by Mugabe. That is hurdle two.

After that we need a credible Government and this is going to be more difficult than it might seem. The outgoing government has many individuals in it that are far past their 'sell by' dates. Mohadi will probably not be able to come back from his severe injuries in the White City grenade attack and General Chiwenga was a byproduct of the November MAT. The number of remaining Cabinet Ministers who are not tainted with corruption or are handling their portfolios with some measure of success can be counted on one hand. Putting a new team together from Zanu PF is not going to be easy if Emmerson Mnangagwa is elected.

It is clear now that this is going to be a very tight contest between Mnangagwa and Chamisa. The latest polls put them almost neck and neck. Should the MDC Alliance win the Presidency then I expect an unholy scramble for posts in the new government. Apart from a handful who were of some value in the GNU most are untried and lack experience and qualifications for specific tasks. Chamisa will not have an easy time making his choices for Ministers and then for the many hundreds of key posts in a new administration. I do not believe the professional army or the police will oppose a Chamisa led government and that a second coup is almost impossible.

The ideal might be another national government with both main parties needing each other in a hung Parliament. I really think that Parliament is going to be much more diverse than before and that the independents will, for the first time, play a significant role. This would then enable us to choose an executive from a bigger pool of talent with experience and integrity. That is the third hurdle for us on the road back to sanity.

If we manage these three hurdles, and it's a big if, then we face the next hurdle, which in many ways will be the most difficult. Ask any business person, the toughest test is always your banker. In our case that is the IMF. This is not a big organization - just less than 3000 employees worldwide, but the biggest businesses in the world (Governments), controlling trillions of dollars, sit on its Board and control its decisions and it is on those key shareholder's views that the Fund will make its decisions.

In my position as a member of the finance committee in Parliament, I have had the privilege of meeting the IMF teams who visit Zimbabwe on a regular basis to review the state of our affairs. They are well informed and have access to information that is not normally made available to ordinary citizens. They also have available to them the very best minds in the business of running the financial affairs of countries like ours. When countries get into trouble, the Fund is most often the first point of call.

The one thing you must never do is lie to your bank manager - he is usually well informed and will have access to more information than you really want him to know. The best policy is openness and transparency with a frank outline of just how deep the hole you are in is! In our case, Zimbabwe is in a very deep hole and faces almost insurmountable problems.

The new government here - irrespective of who come to power on Monday, is going to have to face a number of immediate tasks - the mid-year report by the Minister of Finance must be presented to the House of Assembly, the guidelines for the 2019 budget issued to the Ministries to assist with the preparation of their bids for funding and the budget program agreed with all stakeholders. This will be followed by a comprehensive review of the economic and fiscal situation and monetary policy.

Once these measures have been taken and completed, it would make sense to me to do two things - the first would be to request technical assistance from the Fund and the World Bank. If you do not draw on the vast experience of these institutions, you are short sighted and crazy. They have been at this for 70 years and in the process have accumulated a vast amount of experience in the management of the sort of problems we face today. The Bank on developmental issues - policy and strategies and the Fund on fiscal and monetary policy and management.

During the GNU from 2009 to 2013 we managed our affairs with the help and advice of the fund and pursued conservative fiscal policies. The reward was a surge of confidence and rapid growth with stability and low inflation. As a reward the country was given a IMF program which collapsed because we promptly broke all the rules once the GNU was out of the way. We have to understand that admission to global capital markets and access to low interest long term funding so essential to growth and development is dependent on a green light from the IMF.

If we want to play in that game, we have to play by the rules or the referee (the Fund) will kick us into touch or even give us a red card and insist we leave the field. That they have not done so is purely because the Board has resolved to adopt a 'wait and see' approach, their office in Harare is still open and their staff monitoring events but after the election on Monday - we will face the next hurdle - number 4, when their team gets into the Country for talks on the way forward. If we pass all the others and fail at this hurdle, we are still in the wilderness and unable to get assistance.

So Monday is just a start. I think it is going to be OK and that we will get a cautious thumb up from the observer missions - but heavily qualified. But I am not so sure about the rest. The World Cup showed us all that football is a team game and those countries who were able to field a real team, focused, united and each aware of their role, those were the teams that made it to the finals. It was not the superstars - they were there, but they disappointed. Nation building and economic growth with stability is just the same. We did just that in November 2017, can we do it again - yes we can!

I watched Obama speak in Johannesburg at the 100th celebration of the birth of Mandela. My how we miss that man as a world. He reminded us of the magic of Mandela and how he touched all our lives with his simple, down to earth wisdom and insight. I do not really care who wins on Monday - whoever it is they must break the mould of the past and lead us into the future we all deserve.