Is lawfare the path for political losers? 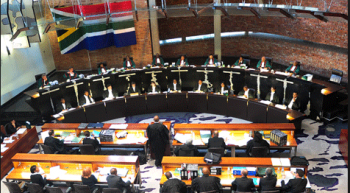 During the last few months, Cape Town Mayor Patricia de Lille has been in and out of court, facing off against her own political party, the Democratic Alliance (DA), which has been moving heaven and earth to get rid of her. Something similar may be on the cards in Knysna and George as well, where the DA is at loggerheads with the mayors that represent it in those municipalities. The SA Catholic Bishops' Conference Parliamentary Liaison Office looks at the growing number of "lawfare" cases - which are argued through the courts rather than in the political arena - and asks whether this beneficial for our democracy.


Are South African political actors too quick to ask the country’s judges to referee their disputes? Ordinarily, in a stable and orderly democracy, it is highly desirable that people, and the parties and factions that they constitute, should ‘go the legal route’ rather than settle their differences by force, or bribery, or by any of the myriad other underhand methods that are typically associated with the world of politics.

During the last few months, Cape Town Mayor Patricia de Lille has been in and out of court, facing off against her own political party, the Democratic Alliance, which has been moving heaven and earth to get rid of her. Something similar may be on the cards in Knysna and George as well, where the DA is at loggerheads with the mayors that represent it in those municipalities. As for the ANC, it is impossible to keep track of how many court applications it has brought against, or opposed from, its own members, often at senior provincial level. New ones are enrolled on a weekly basis, and at least half of its provincial conferences this year have been halted or delayed due to court applications brought by disgruntled party members.

It is by no means only the two biggest parties that require the help of judges to run their affairs. A few years ago the Congress of the People (COPE) was paralysed by a prolonged court battle between its two main founders, Mosiuoa Lekota and Mbazima Shilowa. In 2014, barely a month after contesting its first general election, Agang’s rival leadership factions were seeking interdicts against each other; and in 2015 the EFF fought an ugly court battle against four of its leading MPs, who had publicly accused the party’s leadership of abusing party monies and preventing internal debate.

We have seen a spate of cases brought by NGOs and opposition parties against the government and against various parastatal organisations, such as the SABC and Eskom. It sometimes appears that obtaining a court order is the only way of overcoming inertia or, worse, intransigence, at senior levels of state administration. And on occasion, as with the still unresolved debacle around the system for payment of social grants, initial court orders have been ignored, leading to further litigation.

This excessive use of the courts speaks to the concern that democratic arrangements in our land are virtually devoid of non-litigious sites for mediation of conflict. Why would party faithful rush off to court to resolve an internecine dispute? Why is the state the chief of all litigators? How does it happen that labour federations should seek solace in court processes?

Lastly, we have also become used to the phenomenon of multiple appeals. Losing political litigants, it seems, are almost never satisfied with the ruling of a division of the High Court; they routinely seek leave to appeal to the Supreme Court of Appeal and, if they lose there as well, to the Constitutional Court. Where government is the losing party, this trend is facilitated by its endlessly deep pockets, courtesy of the taxpayer, but even opposition parties (witness the DA in the De Lille matter) are prone to take matters ‘all the way’.

The doctrine of the separation of powers, which applies to a large extent in our country, requires that the various arms of government (legislature, executive and judiciary) respect the limits of their spheres of power, and do not attempt to exercise powers which properly belong to one of the other arms. This is perhaps the best way yet devised to provide for checks and balances on the exercise of state power, and to prevent its over-concentration in any one part of the structure of state.

Two recent examples illustrate how this important doctrine can be threatened by ‘lawfare’. In the litigation around the SA Social Security Agency (SASSA) and the contracts and mechanisms for the payments of social grants, the Constitutional Court found itself having to play a role that was “not one of the Court’s choosing”, in that, in order to undo the mess created by the then Minister of Social Development’s utter disregard of her responsibilities, it had to prescribe detailed administrative remedies of a kind that properly belong to the executive arm of government. The Court, facing the horrifying possibility that over 15 million social grants would not be paid, thus had to intrude into the domain of the executive, blurring the lines of separation.

In another matter the Court declined to cross the lines. When a motion of no confidence in President Zuma was tabled in April 2017, some opposition parties asked the Speaker to allow a secret ballot to be held, citing the likelihood that some ANC MPs would be reluctant to vote with their consciences if the vote was an open one. The Speaker responded that she believed she was constitutionally precluded from authorising a secret ballot, whereupon the United Democratic Movement approached the Constitutional Court for a ruling. Among the orders it sought was one that read as follows: “The Constitution requires that motions of no confidence in terms of section 102 of the Constitution must be decided by secret ballot.”

If on the one hand lawfare risks the credibility and status of the courts, then on the other it also threatens to weaken or sideline traditional methods of political engagement.

Justice Moseneke sums it up this way:

“[C]ourts are not and should not be a substitute for the obligation to move our society to spaces envisioned in the Constitution. We must rethink our democratic processes in a manner that permits peaceable conflict mediation. We must find a new ethos that permits the lamb and the lion to graze together. Losers and winners should both overcome.”

It may be a bit much to hope that our various lambs and lions are going to graze together anytime soon, but there is certainly a lot that can be done to reduce the need for lawfare. Perhaps, with the new spirit of robust oversight that seems to be emerging in Parliament, and with President Ramaphosa’s tentative efforts to rid government of some of its more egregious offenders against democratic values, we are moving in the right direction.