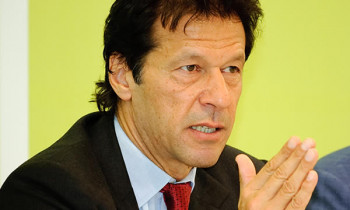 Cricket legend Imran Khan's Pakistan Tehreek-e-Insaf (PTI) won the country's recent election and promises a huge clean-up of corruption. What is also clear is that he plans a realignment with Pakistan's so-called ally, the US. He failed to win an outright majority, but will be able to secure control through a coalition with smaller regional parties.

In this 2012 interview with Wikileaks' founder Julian Assange, Khan delves into the entrenched corruption in Pakistani politics. He explains how no country has ever been bombed by its own ally, like Pakistan has been bombed by the US. Some 40,000 Pakistanis have been killed by their own armed forces or the US Air Force - at the urging of the US in pursuit of its "War on Terror" - and many more merely suspected of being terrorists were disappeared or killed. Khan says it is time to put an end to the US-Pakistani "client-master" relationship. He is also anti-nuclear (Pakistan is nuclear-armed) but will not unilaterally dismantle the country's nuclear weapons so long as regional threats and tensions remain.

This is a fascinating interview, in which Khan also explains why he boycotted the previous election: a reconciliation agreement between the two top political leaders gave amnesty to criminals and allowed them back into government. Clearly, Pakistan is in for huge change.