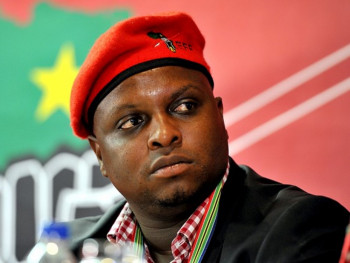 The DNA of racist, anti-Indian statements by EFF (Economic Freedom Fighters) chief whip, Floyd Shivambu, to Parliament's finance committee this week can be traced back to the late 1980s and the UDF (United Democratic Front's) and MDM (Mass Democratic Movement's) response to allegations of kidnapping and murder involving Winnie Madikizela-Mandela. But with the potential return of former High Risk Intervention Unit (HRIU) members to SARS and investigations into Commander-in-Chief Julius Malema's tax affairs, as well as the party's links to big tobacco funders, the attack seems much more calculated. There are several legs to the EFF's smoke and mirrors, says Daily Maverick.


It is no secret that the EFF have claimed the once-spurned struggle icon Winnie Madikizela-Mandela as the party’s metaphysical lodestar who will, in good time provide “a sign”.

One sign that we can all read without supernatural assistance is that SARS is in the process of being uncaptured. One of the consequences of this might be the return of certain members of the HRIU who were probing the tax matters of high-profile South Africans, including EFF CIC Julius Malema.

Over and above Malema’s tax matters is the EFF’s and Malema’s close and acknowledged relationship with cigarette company Carnilinx and its director Adriano Mazzotti, who is also under investigation for smuggling and tax evasion. Then there are also investigations into corruption in Limpopo,

In a statement released on Tuesday EFF national spokesperson Mbuyiseni Ndlozi said “whenever SARS comes to present in Parliament, (Ismail) Momoniat brings a parallel report, which always paints a bleak portrayal of African leadership in entities under National Treasury. When the South African Reserve Bank appears in Parliament, it is Momoniat who brings a parallel report and speaks like he owns the bank”.

For now, take note of the EFF’s mention of SARS, you will need it later.

Shivambu’s deeply racist remarks directed at Momoniat, Treasury Deputy Director General, during a heated Standing Committee on Finance meeting on Tuesday smacks more of cheap populism and opportunism than principle, but there is reason behind the ugly rhetoric.

Be that as it may, a deep thread has been woven between Madikizela-Mandela and EFF leadership and particles of the DNA that underpins this relationship is what Shivambu exploited when he objected repeatedly to Momoniat’s presence on Tuesday asking where Treasury Director-General Dondo Mogajane was.

Momoniat, charged Shivambu, “undermined Africans” by not taking seriously Mogajane, Finance Minister Nhlanhla Nene or Deputy Minister of Finance Mondli Gungubele. Said Shivambu: “He (Momoniat) thinks he is superior to them. He takes all the decisions and he is always here in Parliament as if he is National Treasury alone. He is supposed to focus on what he is assigned to.”

Afterwards Shivambu posted a reference to a March 1990 report of a commission into allegations of the role of an alleged Indian “cabal” in the “disunity of the MDM (Mass Democratic Movement)… due to the manipulating role of certain Indians and Whites regarded as leaders in the struggle.”

Shivambu, by the way, was about seven years old when the document was published.

Madikizela-Mandela in her testimony to the TRC referred to Murphy Morobe, spokesperson for the MDM and one of the leading figures in the Mandela Crisis Committee, established to look into allegations of murder and thuggery by Mandela and the Mandela United Football Team, as “Patel” instead of by his surname because of his perceived links to this “Indian cabal”.

The roots of this division are deep and complex and can be found in the historical tensions between the ANC in exile and the UDF and MDM “inxile” Charterist groupings in the hugely and violent and turbulent 1980s in the lead up to the formation of the UDF.

It was also during this time that STRATCOM did it’s dirtiest work, including discrediting Madikizela-Mandela, as a former Security Branch operative, Vic McPherson confirmed recently to Pascale Lamche in the making of her 2017 documentary “Winnie”. That Winnie was a victim of state propaganda aimed at discrediting her is not in question as the reclamation of her posthumous legacy has indicated.

Over and above jitters with regard to possible re-opened tax investigations there are other legs to Shivambu and the EFF’s grasping for renewed relevance.

The EFF, defanged by the ANC’s successful neutralisation of two of its key election issues – radical economic transformation and the redistribution of land – is looking to appeal to a new constituency apropos the 2019 election; those South Africans excluded particularly from financial services and positions of state power where Treasury is viewed as a brake for insisting on regulatory and legislative compliance.

The EFF are masters at quick-witted sloganeering that has left political rivals eating their red underpants. It was a highly effective strategy while the EFF picked vulnerable targets like uBaba ka Duduzane and the Minister of Selfies, who never stood a chance.

Shivambu’s smarts are not under suspicion. He understands the delegation of authority and is schooled in how government, including Treasury, works. Shivambu further regularly sits in Parliament’s standing committee on finance (SCOF), which means he knows exactly what the discussion and focus points are.

Dismissing Shivambu as someone who doesn’t know any better while using his silver tongue to lash out at a randomly-picked target would therefore be a lazy and too kind an argument.

South Africa’s reaction to Shivambu’s racist remarks about Momoniat’s non-Africanness has for the most part been a knee-jerk.

But panic forces mistakes. And the EFF is panicking.

To understand why Shivambu’s comments about Momoniat are a deliberate lie, we need to examine some facts – including the portfolio and responsibilities of Momoniat as opposed to the role of his colleagues.

Committee chair Yunus Carrim, rightly so, immediately gave Shivambu a slap down and a brief lecture on Struggle History. Carrim’s focus in the stringent reprimand is however questionable – focusing on Momoniat’s extensive and impressive Struggle credentials is problematic. Equitably applied, we should then also focus on Jacob Zuma’s struggle credentials and disregard his totally shambolic leadership of the past decade.

What Carrim should have said is that Momoniat is a maths whiz with over three decades of experience and institutional memory in National Treasury.

“Not so honourable Shivambu, Momoniat started working in National Treasury when you still played marbles,” might’ve been a more fitting response.

Momoniat, a former university maths lecturer, joined the Treasury in January 1995 and worked with the team modernising the budget process. He initially headed the division responsible for provincial and local government finances, served as director for the Development Bank of Southern Africa in the early 2000’s and was later appointed as deputy director general of tax and financial sector policy – the position he still holds today.

Momoniat is one of 10 deputy directors-general in treasury, all reporting to director-general Dondo Mogajane. Mogajane’s political heads are the minister and deputy minister of finance. Momoniat is the longest-serving DDG with the most experience at treasury on top management level, including Mogajane who joined treasury in the late 1990’s as a subordinate to Momoniat.

The portfolios of his colleagues include “asset and liability management” that includes strategy and risk management, “public finance” that revolves around education and related departments as well as national capital projects, the “budget office” that decides on how the country will spend our taxes and “intergovernmental relations” that includes local government and provincial budget analysis.

According to Shivambu, a “corrupt” Momoniat “undermines and disregards leadership in the National Treasury. Momoniat has assigned to himself virtually all powers of National Treasury, micromanages its entities and also try to micromanage Parliamentary legislative processes”.

Shivambu effectively accuses Momoniat of being the only one reporting to Parliament, therefore controlling the message coming out of treasury, while keeping a stranglehold on the processes within the department.

With what we now know of Treasury’s structure and reporting lines, this seems strange and unlikely.

But let’s test Shivambu’s accusations against recorded Parliamentary minutes of Standing Committee on Finance meetings in the past three months.

On 2 March, National Treasury was called by the committee to respond to public comments on the 2018 Budget. Momoniat reported on the tax matters, Ian Stuart, acting head of the budget office, discussed spending patterns, economic growth and stabilising the economy while Chris Axelson, acting chief director of economic tax analysis discussed some details around the VAT hike.

Minutes show that Shivambu was absent from the meeting.

The struggling national airline was the subject of a committee discussion on 27 March. Deputy minister of finance Mondli Gungubele led the charge. Shivambu was present at this meeting, minutes show. Momoniat did not attend the session.

On 17 April the committee discussed the financial sector regulation act, a theme that falls squarely in Momoniat’s portfolio. In this meeting, Shivambu accused Momoniat of being all things corrupt. Treasury’s Kershia Singh, director market conduct, also gave her view on matters.

The illicit tobacco trade came under scrutiny on 2 May. Shivambu was absent from this meeting, and missed an informative briefing by Treasury’s Mpho Legote, director for VAT, excise duties and sub-national taxes. Momoniat did not attend this meeting.