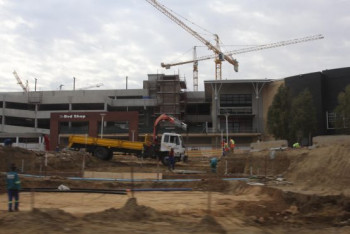 It’s a shakedown that’s been going on for several years in KwaZulu-Natal, but is now rearing its head in Johannesburg. Local community gangs, often armed, threaten to shut down construction sites unless they are given 30% of the work, says Moneyweb.

“The mafia is particularly prevalent in the Durban metro area, which is why I will no longer work in this area,” says a construction manager who asked not to be named. “I was previously working on a construction site in Pietermaritzburg and these guys would turn up every day, cocking an AK47 in front on my office. You have little option but to agree to their terms, which means 30% of our sub-contractors are imposed on us.”

The so-called construction mafia has organised itself into business forums, one of which is the Delangokubona Business Forum, reportedly comprising more than 3 000 members, according to the Sunday Tribune.

The gangs usually demand that construction managers employ their members, often at extortionate rates – in one case, a construction company was ordered to employ a bricklayer at R2.50 a brick when the going market rate is R0.80 a brick. Several sites have had to let other workers go to make room for the so-called mafia workers, who frequently lack the skills needed for the jobs. Nor are they necessarily local. Equipment and materials are reported to have been stolen in some instances when Forum workers have been employed.

Peter Barnard, a partner at Cox Yeats Attorneys, has won around 30 court interdicts against multiple business forums on behalf of construction firms in KwaZulu-Natal.

“It seems that this all started in February 2016 when a crowd stormed into the Durban mayor’s office demanding that local suppliers and contractors be given work,” he says.

“From what I understand, they left that meeting with the impression that local suppliers and contractors would be awarded 30% of government construction contracts. They obviously misunderstood what was being conveyed. The new Regulations to the Preferential Procurement Policy Framework Act, which govern most state projects, are complicated and don’t create an automatic entitlement to work.

“They obviously heard what they wanted to – and have proceeded on the basis that they are entitled to 30% of all work on projects. From about March 2016, ‘business forums’ started hitting construction sites and demanding work.”

Barnard says that virtually every major development and Project in KwaZulu-Natal has been affected by one or more forums.

The “construction mafia” rejects accusations of thuggery, claiming to be fulfilling government’s mantra of radical economic transformation by ensuring that 30% of sub-contracting work is given to locals.

Recently, construction of the Oceans Hotel in Umhlanga, backed by businessman Vivian Reddy, was shut down for several months after work was disrupted by Forum members. Last year WBHO downed tools for several weeks on the R1,8bn expansion of the Suncoast Casino when Forum members stormed on site demanding a slice of the action. One manager with a major construction firm confirmed that the mafia has now appeared on construction sites in the north of Johannesburg.

Some site supervisors and managers have started toting guns in self-defence after numerous instances of on-site assault. In some cases, site managers have been shot at or threatened.

Several construction firms have had to approach the courts to interdict the Business Forum from intimidating or harassing construction workers. Among the companies awarded interdicts against the group are Tongaat Hulett Developments, Vumani Civils CC, WK Construction SA and Water Bles Investments. The interdicts prevent members of the Delangokubona Forum from intimidating or harassing workers at the Sibaya Precinct development in Umdloti.

The troubling aspect is that the intimidation tactics appear to be working.

Many firms are forced to enter into negotiations and reach a settlement with the various business forums. Construction projects with a 15% profit margin cannot afford time delays, given the highly geared nature of these projects. Delays add to the costs, so companies will often prefer to come to an accommodation with Forum members rather than run the risk of further disruption and intimidation.

Local government officials and police have promised to stamp out such instances of thuggery, but construction managers say the city government in Durban is sending out mixed signals, promoting “radical economic transformation” on the one hand, while promising to stamp out thuggery on the other.

“The difficulty that companies have is that they are already employing locals and complying with the law,” says Barnard. “They have to meet government requirements to be awarded the tenders and projects in the first place. Then, after moving onto site, they now have another group, or several of them, coming in and demanding that they be employed. If they don’t get what they want, they often shut the site down.”

Some site managers say the police will respond only when a serious crime such as assault is involved. Barnard says the interdicts awarded by the Durban High Court include an action to compel the SA Police Services to do whatever is necessary to give effect to the court orders. “The SAPS have been very good in executing on these orders, and that has helped bring some order to the situation.”

One construction executive who asked not to be named says that although his company won an interdict against the business forum, it proved difficult to serve on the individuals involved. “So although we won the interdict, this did not stop them. Many of the people who were intimidating us were not even local. We then started working with the local community and explained that these people were trying to take their jobs. It was at this point that things started to quieten down.”

A water project for eThekwini Municipality in KwaZulu-Natal has been repeatedly disrupted by business forum members, despite an interdict being awarded to the contractors. “We are hoping for a final order that will allow the SAPS to make an arrest in this case,” says Barnard, adding that this would be the first such order that he is aware of.

There is a danger that some struggling construction firms will be put out of business by these mafia-style tactics. It remains to be seen how forcefully police in other parts of the country deal with cases of intimidation as the mafia spreads from Durban.