Grace Mugabe gets a taste of land invasion 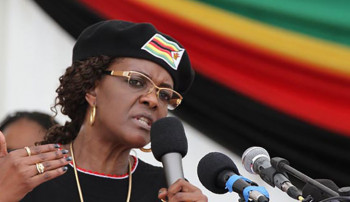 Grace Mugabe, wife of the deposed Zimbabwean leader Robert Mugabe, has complained to the police that vandals have invaded one of the farms she "owns" in the Mazoe district of Zimbabwe. Movement for Democratic Change (MDC) parliamentarian Eddie Cross was so moved by this outrage that he penned this open letter to her, asking what it is like to be at the receiving end of the cruelty she meted out to ordinary Zimbabweans and farmers. Here is a rather decent though probably incomplete catalogue of her crimes.

I have just heard the news on the BBC that you are the victim of a farm invasion. I am devastated by this news and saw that you have been to a Police Station and laid a complaint and asked for help to remove these vandals from your property, Smithfield Farm, in Mazoe. I also saw your comments to the President of the Country asking that 'how would he feel if, after his retirement, his investments were treated like this.'

Now I was wondering, are you the same 'Grace Mugabe' who was the wife of the President of Zimbabwe when he was allowing thugs of various backgrounds to invade private properties of local investors. When these same thugs were burning down the homes of farm owners and even the workers, not even allowing them to take their most personal items away from their homes?

Are you the lady who has been at the center of power in Zimbabwe when a large number of investors in Zimbabwe who resisted the theft of their life's work, were murdered? Like Stephens who was murdered by the Police who had abducted him leaving his wife a widow with small children to raise. I am sure you saw the picture of a young farmer, who had bought his farm with a legitimate, legal permit from your husband's government, gunned down outside his home with his dog lying next to him and refusing to be taken away.

How many times did you sit on a public platform in front of the people of Zimbabwe and raise your hand in an angry fist and call for invasions of private property and the forced removal of the legitimate owners? I am sure you appreciated the fact that these investors, unlike you, had nothing outside of their business. I think you knew that many, if not most of these hapless individuals would go on to live in penury; dying from stress related maladies and being buried by their friends and colleagues because they could not afford the price of a coffin.

As an 'investor' in a farming enterprise in Zimbabwe, I am sure you appreciated what your husband was doing when he forced investors who were being evicted from their properties and to abandon billions of dollars of property, equipment, vehicles and other assets, to pay their staff their full benefits as if they were closing their business's. As a woman who runs a large agri-business firm, I am sure you understand that for many this was the final straw in that the cost of these payments to nearly 350 000 workers completely bankrupted the investors involved. They walked away with nothing.

Do you know that when a friend of mine donated to the MDC - a local opposition group in Zimbabwe, he was filmed doing this and a few days later when driving to his farm and stopping at the gate to open it, he was gunned down in front of his son and died in his arms. I think his cheque was for Z$15 000, about US$ 1200. Is that what you thought was the price of a life? What sort of price would you put for your life in similar circumstances?

And then we come to your own farming empire - the vast lands you have taken by force from their legitimate owners. Not just any farms, some of the very finest farms in the world including one farm which held the world record for maize production for four years. I think of the farm you took by force, using your own employed thugs, which you wanted to turn into a game park. In the process you evicted not only the legitimate owners, but the people who had settled there under the State sponsored land reform program. Do you remember the pictures of the families with small children sitting in the open, sleeping on the ground in cold weather on the side of the road, not knowing what to do or where to go?

Do you know what happened when Stephens widow appealed for help from the Police? Do you know what has been the standard response to the thousands of calls from investors when their homes and managers were under siege? The response was 'we can do nothing, it is political.' Do you expect any better? If so why? Like so many other investors before you - you were born in South Africa and should be classified as an 'Alien' if we are all to be treated the same.

You also claimed that many Citrus trees in full production and about 10 years old on average, were being cut down and dug up by your invaders. Now I know that some of your properties were in fact taken illegally from a public company and included mature citrus orchards. I do not think you paid for any of this, so the pumps, pipelines, power installations, roads, packing sheds, farm buildings, homesteads and staff accommodation, tractors and equipment do not in legal terms belong to you at all, so why the angst? Easy come, easy go. Just walk away and go home to any one of your many mansions and live out your life on your husband's ill-gotten gains.

In fact, I hear that you are finding it difficult to pay your expenses at present and have a large overdraft at the commercial banks who were crazy enough to lend you money and also at the Reserve Bank of Zimbabwe. My personal advice to you is to employ a good accountant and a lawyer and get them to review your 'investment portfolio'. I am sure they will find that your equity in the business is negative and their best advice will be to go into liquidation and seek the protection of the Companies Act - because right now, nothing else will protect you from your creditors who are many. You may be able to hang onto the 'Blue Roof' but in your new circumstances you may well discover this also is now a liability and just too expensive to maintain - perhaps you can donate the 'house' to the Harare Children's Home as an extension or to 'Kidscan' as a luxury rehabilitation center for kids with cancer.

Many of us know exactly what you are going through. It has happened to many in this country and because of this lawless behavior investors of all hues are chary of investing here. I think you now know a little about what has already happened to others and I hope you do not suffer in the same way. I would not wish that on anyone, I have seen how much it hurts.