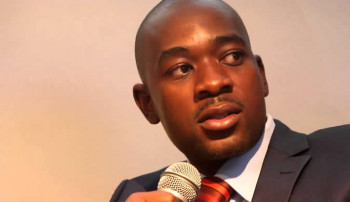 Hundreds of thousands of people poured onto the streets last month to mourn the passing of Zimbabwe's Movement for Democratic Change (MDC) founder and former leader, Morgan Tsvangirai. Just two months earlier one million Zimbabweans took to the streets to celebrate the ouster of former president Robert Mugabe, who will go down in history as a genocidal despot, alongside the like of Pol Pot and Josef Stalin. The MDC elected a new leader, Nelson Chamisa, 40 years old and an advocate, who carries the hopes of a younger generation of Zimbabweans into the up-coming elections. MDC MP Eddie Cross looks at how radically things have changed in Zimbabwe over the last few months.


In October 2017, just six months ago, Mr. Mugabe was the State President and it looked as if we were stuck with him for another 5-year term after elections in 2018. There seemed to be no possibility of real change. When I drove from my home in Bulawayo to Harare for my duties in Parliament I would have to face 18 to 21 Police manned road blocks. We never knew what demands would confront us at these forms of Police suppression and extortion.

Our economy was deeply mired in the mud of investor skepticism and doubt, our money was shrinking while we watched, the stock market was rising like a meteor as people tried to protect their liquid assets by investing in shares. The premium on fungible assets rose to record levels. The flight of people seeking better lives was increasing and our neighbors were becoming increasingly anxious.

The change agenda seemed remote, the main advocate of democracy and reforms in State affairs, Morgan Tsvangirai was fighting cancer in South Africa.

Then the President pulled the trigger on his own demise, he fired Mnangagwa. The crocodile sank out of sight - not out of fear but to prepare his attack. A friend of mine, sitting on the bank of the Chobe watched a herd of goat's drink on the opposite bank. As they turned to climb the bank, there was a splash and faster than the eye could follow a crocodile came out of the water and took a large goat who had just turned away from the water. In seconds the surface of the water was again smooth and quiet.

When it came, the attack by Mnangagwa was seamless, carried in the way we have come to expect of him, no detail was left out and I remarked to a colleague in the MDC - 'now the country knows what it feels like to confront ED on the playing field!' - a reference to the 2013 elections when a campaign run by ED simply rolled over the MDC and they terminated the GNU.

It did not stop there; the ED team took over a couple of floors of a 5-star hotel in the Capital and their transition team took over from the Military who simply went back to their barracks. In a week a new Cabinet was formed and when they walked into their first Cabinet meeting on a Tuesday morning, each Minister was given a 100-day program that they were expected to complete. The new regime hit the ground running and a flurry of activity ensued.

What saved President Mnangagwa and gave him a head start was not anything to do with the Military - it came from a most unexpected source. The Veterans of the war of liberation, now a relatively small group of rapidly aging men and women, called for a demonstration in support of the Coup on a Saturday morning. No political party endorsed the call, not even my own Party. Morgan Tsvangirai, resting at home met with an Ambassador the previous day and dismissed the call, telling an Ambassador 'maybe 15 000 people will respond'.

I thought otherwise and called the Secretary General of the Party to plead with him to endorse the call and get our own people out on the streets. Eventually he did so but calling for an alternative rally in the City Center. In the end I believe that God took charge and by 11.00hrs when my son and I made our way to Highfields, more than a million people were gathered there - a drone took a picture and it shows a sea of people as far as the eye could reach. It was the same everywhere, massive crowds of people celebrating the removal of Mr. Mugabe from power.

What that did was to legitimize the Coup by Mnangagwa against his friend and colleague of more than 40 years. The international Community saw this as overwhelming support for the military action and the African Community was forced to back down on measures to condemn and isolate the regime in Harare. SADC observers in Harare to visit Mr. Mugabe and to assess for themselves what was going on were put into a helicopter and flown over the City. It was the end of 37 years of a dictatorial regime and the people had given an unmistakable message that the Coup had their support.

However, reality set in very quickly, the Military led Junta which had run the country for the previous 20 years as the power and reach of the Zanu Party shrank, demanded they be included in Government. To try and block Mnangagwa from the seat of power, Mugabe offered the Armed Forces chief, General Chiwenga, the Presidency only to be blocked by the Junior Officers who ran the Coup who wanted Mnangagwa. But when the new Cabinet was announced on a Sunday morning, it was clear that the men who had controlled the Junta had been incorporated into Government for the first time. General Chiwenga was appointed Vice President and Minister of Defence.

I have no doubt that given unfettered control of the State, in the same way that Mugabe had ruled for 37 years, that we would have seen a similar situation that we witnessed in a smaller way in the Coup. Seamless change but it was clear very quickly that the new regime was conflicted. After two months of rapid fire activity, suddenly the new Government seems running out of steam. The death of Morgan Tsvangirai was expected, but not the response. Hundreds of thousands came out to celebrate his life and mourn his passing.

Then out of the melee that characterized the struggle for succession in the MDC, the people again took over and a rising tide of support, nationwide, carried Nelson Chamisa into the Presidency of the MDC. Khupe and Mudzuri, as Vice Presidents felt that they had a right to be considered for the post. The Secretary General of the Party called for an elective Congress to decide the issue and even considered running for the post himself. However, the tide of popular opinion left no room for debate or constitutional niceties and Nelson was swept into control of the Party. The last to go down was Khupe who refused to bend the knee and was herself expelled from the Party last week on Friday. She goes into political oblivion still calling for an elective Congress and claiming that she, alone has the right to the top job.

In one of his early speeches Nelson said that if he was elected he would build a 'bullet train' which would carry passengers from Bulawayo to Harare in 30 minutes. He was mocked by Zanu and others for this statement but there can be no doubt that he himself is on such a train of popular support and suddenly the new regime, promising a free and fair election, are vulnerable. With nearly two thirds of the voter's roll being under 35 years of age, Chamisa represents the future, Mnangagwa and his team - the past.

Despite his promises, real reform of the electoral system is slow and erratic, the systems that were used to completely subvert the 2013 election are all in place, there is little sign that we will see much more reform and despite the international Community lowering the boom on the standards expected in August 2018, the new regime is going to struggle to gain credibility and recognition. Like 2008 when the SADC tried to force Mugabe down the reform road and he went some distance before saying no further.

After a rush of interest, business has concluded that they must wait and see what happens in the election. Will Mnangagwa be able to shed the ticks that he inherited from Mugabe - fat ones like Mpofu and dangerous ones like Chiwenga. Will he be able to put the State on a new road to the future, or just be more of the same? Will the Chamisa juggernaut get over the line, if so what then? There is little doubt we are close to entering the fast lane in terms of growth and development, but we could easily be diverted into yet another deviation to no-where.