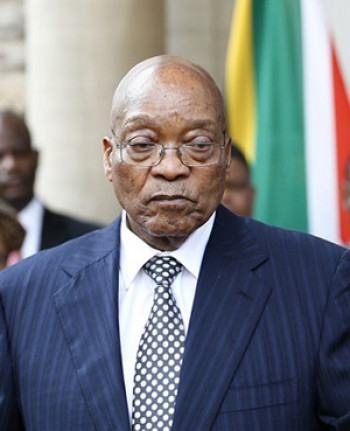 President Jacob Zuma could trigger a Constitutional crisis this week should he proceed with his plans to deliver the state of the nation (Sona) address to parliament. Opposition parties are united in their call for a postponement of Sona, while prosecutors and police prepare for a trial which may see Zuma face 783 charges of fraud, money laundering and racketeering, says City Press.


The ANC’s top leadership will today formally ask President Jacob Zuma to step down, just days before he is due to deliver the state of the nation address (Sona), which he insists on doing.

It is expected that he will agree to leave soon, but only after delivering Sona, which he believes he is constitutionally bound to.

Zuma’s insistence on delivering Sona could cause a constitutional crisis, as opposition parties have told National Assembly Speaker Baleka Mbete that they will approach a court to ask for an interdict stopping the opening of Parliament, the first such action in the country’s history.

‘NO CONDITIONS. NO ATTITUDE’

ANC secretary-general Ace Magashule told City Press yesterday that the party’s top six officials will go into the momentous meeting with Zuma today with “no conditions”, because there is no set agenda to remove him from office.

This is the first formal one with all six officials since the ANC’s national executive committee (NEC) mandated them in January to “engage” with Zuma on the “transition”, a byword for his early exit.

Despite indications that Zuma refused to heed calls to step down until now, a close associate said this was only because he was waiting for a formal approach from the party’s leadership.

It’s understood that Zuma agreed to the meeting after a Magashule-led delegation visited him earlier this week.

The swift convening of the do-or-die meeting signals that interactions between Zuma and ANC president Cyril Ramaphosa to defuse tensions between Luthuli House and the Union Buildings have not made significant progress, hastening the call for Zuma’s downfall.

However, his colleague in the top six, treasurer-general Paul Mashatile said in a television interview that there were tensions and that it would be ideal if Zuma were to step aside, to allow for one centre of power.

City Press has heard that a special sitting of the NEC will be convened if Zuma and the officials do not come to an agreement today.

But those close to Zuma say he may not need to be forced, because as a “deployee of the ANC”, the president is likely to accede to a request to step down, if he is asked officially to do so.

They said that up to now, nobody has officially asked him to resign. His children have, however, previously made the proposal, in light of widespread anti-Zuma sentiment and allegations of corruption.

“He is waiting for the ANC. I don’t think he will say no to the ANC. He is on record that if the ANC no longer wants him, he will resign. If he insists on staying, whose deployee will he be?” said a close Zuma ally.

The Zuma ally said despite the fact that business, opposition parties and the media had been talking about his exit, he would only listen to the ANC.

“Why must he listen to anybody other than the party that elected him into this position?”

The associate said Zuma felt strongly that it was his constitutional duty to deliver Sona. “Government systems demand that he does, otherwise government will collapse.

“He convenes Sona. We have not seen anything in the law that says he can delegate that responsibility to anyone else. He already gave notice to the speaker in October to convene this meeting. Sona and the budget must be presented, otherwise government will not be able to function. Sona must happen, even if it’s a Sona with disruptions,” said the associate.

MBETE IN THE MIDDLE

Six opposition parties have written to Mbete, telling her to accede to the request for the postponement of Sona until the impeachment regulations are finalised.

This follows a meeting of leaders of the DA, United Democratic Movement (UDM), Congress of the People, Economic Freedom Fighters (EFF), African Christian Democratic Party and the Inkatha Freedom Party on Friday. They agreed to present a united front on the matter.

Mbete has agreed to the EFF’s request to debate a vote of no confidence in Zuma on February 22, the day after the budget speech.

In their letter, the parties warn that if they do not get an “urgent and positive response” to their request for a postponement by the end of business tomorrow, they will be left with no option but to consider approaching an appropriate court on an urgent basis for an order interdicting the Sona.

They say the Thursday of the Sona cannot go ahead before Parliament has complied with the Pretoria High Court directive that it put in place mechanisms to hold the president and the executive to account.

“We find it objectionable that your offices have decided to proceed with the next Sona without affording the House an opportunity to exercise its responsibility in this regard.

“In our view, this is yet another failure on your part to fulfil your responsibility, to enable the National Assembly to hold the executive, starting with the president, to account,” say the leaders.

Opposition parties are convinced that the timing of the motion is perfect, given growing voices of dissent within the ANC. It is understood that some of Zuma’s fiercest loyalists have switched allegiances and now take their orders from Ramaphosa.

Ramaphosa supporters say the Zuma camp has handed them a smoking gun by “mobilising” support under the banner #HandsOffZuma as well provocative comments made by Magashule and his deputy Jessie Duarte.

Tomorrow, supporters of Zuma – most of them from outside ANC structures – are set to march on Luthuli House to denounce the new party leadership’s plans to oust Zuma as president of the republic. Ramaphosa supporters have vowed to defend Luthuli House. This is an ironic replay of last year’s stand-off, when Zuma supporters formed a human chain around the ANC headquarters to ward off protestors calling for his removal.

“When people do something problematic in your name in politics, you are accountable for that. People that mobilise against the organisation are signing your death warrant,” one insider said.

Meanwhile, it appears the National Prosecuting Authority (NPA) is gearing up to charge Zuma with fraud and corruption.

City Press has learnt that Thales, the French arms company that allegedly paid bribes to Zuma, has been ordered to nominate a representative to join him in the dock should criminal charges be reinstated against him.

The latest move comes as prosecutors and police prepare for a trial which may see Zuma face 783 charges of fraud, money laundering and racketeering. NPA head Shaun Abrahams and his team are currently evaluating Zuma’s representations, which he filed this week with three hours to go to the January 31 deadline.

Said a source: “Kanje said he does not want to stand trial with Zuma and referred police to the company headquarters in France. He has been flying in and around France and Namibia since the Hawks’ visit.”

The source added that after Du Plooy’s visit, the company’s group vice president for litigation Christine Guerrier wrote to Hawks head Yolisa Matakata to ask that the company also be afforded an opportunity to make representations to prosecutors, as Zuma had.

“They threatened legal action if their request was not granted,” the source said.

“Our investigator was requested by the new prosecutions team to establish who will represent Thint [now Thales] during the trial if the National Director of Public Prosecutions (NDPP) Shaun Abrahams decides to prosecute the company,” he said.

Mulaudzi said Thales was “duly informed that the decision lies with the NDPP based on the recent Supreme Court of Appeal ruling.”

He said Thales “committed to cooperate pending the decision of the NDPP”.

Sources in the prosecuting authority said the days of Zuma “being given chances are over” and that Abrahams would not treat him with “soft gloves”.

NO DEAL FOR ‘NOT GUILTY’ ZUMA

However, a senior ANC leader who is an ally of Zuma, said he was unlikely to come with a begging bowl.

“As I understand, that man cannot cut a deal that says give me amnesty from prosecution when he is convinced there is nothing he is guilty of.”

He said Zuma was “a shrewd politician and he would never lock himself into a space of ‘they forgave me, I was guilty’ and hope to have a better life”.

“That can’t happen, there is no guarantee that they will keep to their promise. So you need to forget about the issue of him wanting immunity from prosecution.

“When they come with that thing, he actually tells them ‘no, you are undermining me, I have been fighting this matter for the past 15 years’.”