We say goodbye to Morgan Tsvangirai, a brave and iconic leader 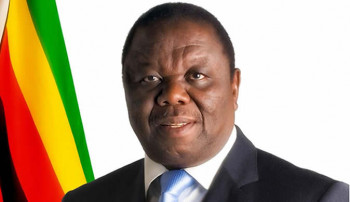 Morgan Tsvangirai passed away this week in South Africa after a long struggle with cancer. He brought hope to the people of Zimbabwe and should rightly have been president of the country had Robert Mugabe not stolen the elections from him and his party, the Movement for Democratic Change. Writing in The Conversation, David B. Moore, Professor of Development Studies, University of Johannesburg, looks at the life of this iconic leader and the opposition movement he led.


Morgan Tsvangirai, who was born March 10 1952 in Buhera, in Manicaland just across the border from Zimbabwe’s Gutu District in Masvingo, became leader of Zimbabwe’s Movement for Democratic Change in September 1999.

He was a very brave and iconic figure in the leadership of Zimbabwe’s anti-authoritarian and social justice movements that emerged in the wake of the austerity inducing structural adjustment programmes of the 1990s. Workers, students, and progressive church leaders were combined into the MDC. Later many white farmers and global supporters were to join. As a combined force they came to threaten the ruling Zimbabwe African National Union-Patriotic Front (ZANU-PF) as never before .

But for ZANU-PF’s coercion, chicanery, and corruptive influences – with the help of its southern neighbour’s ruling party – Tsvangirai could well have become Zimbabwe’s second president, ushering in a democratic era for that country, still struggling to be born.

Alas, that historical moment of optimism and opportunity has passed for the present. Yet, with its inevitable revival, Tsvangirai will be remembered as an heroic herald for the epoch foretold, albeit ignobly postponed by the current ruling party and its pervasive, debilitating effect on Zimbabwe’s politics.

But his death, combined with Robert Mugabe’s coup-led removal as president of ZANU-PF and the country just a few months ago, could mark the end of the Zimbabwean political parties’ internecine fighting. Unfortunately the men in uniform who filled the vacuum created by both parties’ factionalism won’t budge easily.

Tsvangirai’s rise to represent many Zimbabweans’ hopes for a democratic polity beyond Mugabe and ZANU-PF started with his leadership of the Zimbabwe Congress of Trade Unions in the late 1980s. He was instrumental in divorcing it from a corrupt relationship with ZANU-PF. He also supported the efforts of university students and the Zimbabwe Unity Movement to deconstruct the one-party state.

The 1990s witnessed many serious and violently suppressed strikes, demonstrations and stay aways. One nearly entailed Tsvangirai’s assassination and another brought the public servants into the union’s fold. Tsvangirai was viewed as a transformative leader. He commissioned serious evidence based research from his team on how to conjoin the unions and other civil society groups to a new social project. As one researcher told me:

He knew what ‘hegemony’ meant – he read the stuff – and he could use it correctly.

Thus he chaired the National Constitutional Assembly as it emerged in 1997. He also set the groundwork for the Movement for Democratic Change to be catapulted into action with the Working People’s Convention in early 1999. A new social democratic impulse had been ushered into Zimbabwe’s political order. Tsvangirai headed it.

Meanwhile Mugabe and ZANU-PF promised the unruly war veterans huge monthly pensions and that he would speed up the takeover of around 1,500 white farms. He also depleted the fiscus when he joinedLaurent Kabila in his efforts to stave off Paul Kagame’s proxies in the Democratic Republic of the Congo’s second war.

But by the end of 1999, with Mugabe’s constitution up for referendum and promising takeovers of the white farms, the commercial farmers joined the new party’s bandwagon. So too did the UK government, as if to atone for its wilful blindness during the massacres in Matabeleland known as Gukurahundi .

Thus even at its birth, the MDC was placed between the social democratic rock of the working class and new social movements and the hard place of private property rights and other neo-liberal verities. These were the only some of the tensions plaguing the leader of an opposition party rather than a trade union or social movement.

As one young ex-MDC activist has put it, movements aren’t parties. Rather, they are “narrow in focus. They are susceptible to early political liquidation.” Yet parties without this foundation wax and wane as new socio-economic forces come in and of focus.

By 2000, with Mugabe’s February referendum loss and mid-year parliamentary elections approaching, the MDC faced the first of five coerced and corrupted – stolen, to be blunt – ZANU-PF electoral roadblocks over the next 18 years.

In 2008 unprecedented hyperinflation, unemployment, infrastructural decay and millions facing famine undoubtedly had a lot to do with Tsvangirai’s victory in the March elections. But his 47% to Mugabe’s 43% meant a run-off. ZANU-PF then waged what some observers called its mini-Gukurahundi. To save his party members’ lives Tsvangirai withdrew. He was also forced to agree to the South Africa initiated “government of national unity” from 2009 to 2013. This certainly encouraged many MDC members to abandon movement politics for the elitist parliamentary and semi-governance option.

The highly suspect 2013 election put ZANU-PF in Zimbabwe’s driver’s seat again – although it took four years for it to reject its sleeping pilot via a coup that gave the country as well as ZANU-PF a slightly new president. That the coup-makers could only make it light, with democratic pretence, was due in large part to the MDC’s efforts over the decades to keep the democratic discourse strong.

But the 2013 to 2017 political drought also caused the MDC to fragment even further: the sad end being what appeared to be a scramble of pretenders to the MDC’s fragile throne as a man deserving a much neater end to his career reached the last of his mortal coil.

They have done little to honour the man who veteran Zimbabwean journalist Peta Thornycroft remembers did more than anyone “in Zimbabwe’s sad history to challenge the fearful state created by Mr Mugabe”.

If those inheriting Morgan Tsvangirai’s legacy want to restore it to its previous shine they should stop challenging each other long enough to revive the energy and clarity their leader had at millennium’s turn – perhaps inventing a new social base with it.

This article originally appeared at The Conversation. Read the original article here.