More people on welfare than have jobs in SA 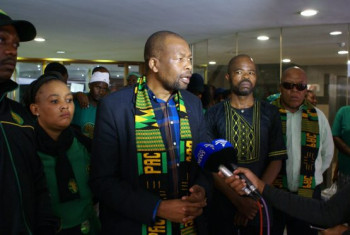 There are now more people receiving social grants in SA than there are people with jobs. Narius Moloto, secretary general of trade union federation NACTU (pictured left), says this is another form of political patronage used by the ANC to buy votes. He says SA is over-administered and suggests scrapping provinces to eliminate wasteful expenditure. Welfare is intended as a short-term intervention to assist the poor during times of great need - but in SA it is turning out to be a trough with no bottom. This article first appeared in Moneyweb.


There are now more people receiving social grants in SA than there are people with jobs.

Finance Minister Malusi Gigaba’s budget highlighted the predicament government finds itself in: there are 17.6 million people receiving grants, against the 16.2 million people with jobs in the country.

In 2001 there were 12.5 million people employed and just 4 million people receiving social grants, according to an Institute of Race Relations survey. The number of people on social grants has exploded more than four-fold in 17 years, while the number of official jobs has gone up just 30% over the same period. Aggravating the situation is the growth in public sector jobs from 2.1m to 2.7m since 2008. Public servants’ salaries – which are more than a third higher than the private sector average – now account for nearly half the annual budget.

“This situation is not sustainable,” Dawie Roodt, chief economist at the Efficient Group, told the Austrian Business Chamber at a post-budget briefing in Sandton last week. “I disagree that this is a conservative or reasonable budget, as some have claimed. It is an awful budget. SA has become a country of social upliftment, rather than a country of economic upliftment. We’re among the most highly taxed countries in the world, and there is no apparent recognition of how we got here or how we are going to get out of this mess.”

Rather than trying to focus on job creation, Roodt says the government should be looking at economic growth as the primary engine of job creation, flanked by privatisation, massive infrastructure development and a world class skills development programme.

Mike Schussler of Economists.co.za says a worrying aspect of the structural dependence being created in the country is that of the roughly 16 million people with jobs, 10 million are in the formal sector and only 7.5 million of those pay tax. “If you add people who are pensioners, we are on our way to having 19m people who are dependent on some form of social grant or pension. This leaves the few who are working to carry the burden. This cannot continue.”

The returns that South Africans receive on their taxes are abysmal. SA learners score among the worst in the world when it comes to maths and science, due in part to the high learners-to-educators ratio: 32 in SA versus 24 for the rest of the world. This is despite spending 22.5% of the budget on education each year. Social assistance will account for R197 billion or nearly 13% of the budget in the coming fiscal year. Coming in just behind this is interest spending, which will swallow R180 billion or 12% of the budget.

Narius Moloto, leader of the Pan African Congress and secretary-general of trade union federation Nactu (National Council of Trade Unions), says while the tax base is becoming smaller, government welfare grants are ballooning out of control – a situation that is unsustainable, even in the short term: “The cash grants system is another form of political patronage and does not encourage upward progression in the economy. The way it is structured at present entrenches dependency. With some of this money that is being spent on social grants, we could have established cooperatives and micro-enterprises in poor communities with a view to permanently weaning them off welfare. That’s not happening and the programmes aimed at job creation are not working.”

One quick way to cut spending is to eliminate the provinces, which are little more than super-Bantustans with mini-presidents, says Moloto. “SA is over-administered. There’s huge duplication between national, provincial and local government. We can save billions a year by eliminating this duplication.

“We’ve consistently argued for the building of an African economy based on self-reliance rather than dependency. Creating millions of jobs is the only way out of the mess this government has created, but it continues to rely on failed ideologies imported from elsewhere. If we are going to learn from abroad, let’s start by looking at countries that have full employment and encourage micro-enterprises as the first step on the economic ladder.  Let’s also start by surveying the exact nature of the economies in the townships, and see how we can build on our own knowledge base.”

The ultimate goal of any welfare programme is to render itself redundant, adds Moloto. He points to the success of Brazil’s Bolsa Familia (Family Allowance) programme, whereby 0.5% of GDP is allocated to social grants, but with conditions: recipients are required to enrol their children in schools, meet school attendance targets, and submit to basic health supervision. According to the World Bank, this programme has cut extreme poverty by half, increased life expectancy and reduced income equality by 15% in less than 15 years.

The programme, which has now been adopted in various forms in 40 other countries, is intended to arrest the transmission of poverty from parents to children, and wean the next generation off welfare completely.

Gigaba’s budget was more realistic than those of his predecessors in the sense that he did not puff up SA’s growth prospects. But the road ahead is grim, with growth unlikely to punch above 2% in the next two years. At that level of growth, you can forget about meaningful job creation.