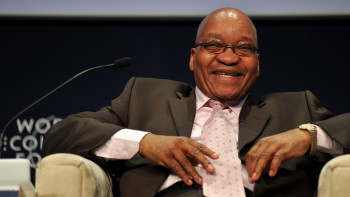 In his first major interview as leader of the ANC, Cyril Ramaphosa was at pains to emphasise that President Jacob Zuma’s early exit should not be a humiliating experience. But that is exactly what he deserves, says Mondi Makhanya, writing in City Press.


“Whatever we do we need to deal with this matter with the level of maturity it requires, with the proper decorum and I will say we should never do it in a way that is going to humiliate President Zuma,” the new ANC president said.

The non-humiliation of Zuma is a theme that Ramaphosa and other ANC members have repeatedly returned to when the discussion about the necessity for Zuma to vacate office immediately comes up. He returned to it again in an interview with Bloomberg and the BBC on the sidelines of the World Economic Forum in Davos.

Ramaphosa told Bloomberg that while there were voices calling for Zuma to “leave right now”, the transition was a “very, very delicate matter” that had to be handled carefully.

Ramaphosa told the BBC’s Hard Talk that as with “any normal human being” Zuma was anxious about his future: “He is naturally feeling anxious and he wants matters to be handled in a way, you know ... to be handled carefully.”

Now all these comments beg the question as to why Zuma deserves to be treated with dignity and protected from humiliation. This unfeeling sentiment might sound odd coming from an erstwhile Catholic altar boy who always had to first remove the halo above his head before jumping into the shower.

But we really do need to ask ourselves as South Africans why somebody who has spent the past decade humiliating us and bringing shame on the country must be driven out of the Union Buildings in a luxury horse-drawn carriage.

Zuma proved just why he doesn’t deserve a dignified exit when he disingenuously declared he was “being arrested for building my home”.

“I built my own home. But some say he can’t build such a big home in Nkandla. You must be arrested because you are building your father’s home,” said Zuma during a visit to Nkandla’s best-performing schools this week.

This is the same man who two years ago apologised for his haughty handling of the Nkandla imbroglio. In his address on the Friday following the judgment, Zuma said he “deeply” regretted his actions, stated that “the gross inflation of prices in the Nkandla project is totally unacceptable and should never have been allowed” and said the judgment had provided government with lessons “which augur well for governance in the future”. And now he mocks the whole process which held him to account.

This should come as no surprise. In the years leading up to the 2016 judgment he mocked anyone who questioned the exorbitant expenditure on so-called security upgrades at his compound. He was arrogant and rude whenever the subject came up. In Parliament he treated any interrogation of the costs as an epic joke.

Other issues of misgovernance and corruption were treated with the same scorn by him. Zuma cared not a jot that he was accountable to the people and not to the dodgy individuals who greased his palm. Zuma humiliated those ministers who refused to be runners for his mafia by unceremoniously dumping them from Cabinet. To rub in the humiliation he would scour the forest for invertebrates, dress them up as humans and install them in office.

ANC national executive committee members and tripartite alliance partners who revolted against corruption were branded traitors and agents of imperialism, and shouted down by his acolytes. He treated fellow top six members as decorative appendages.

Zuma humiliated veterans and stalwarts when they attempted to give him and his leadership collective guidance. In his mind these men and women, who had given their lives to creating a good South Africa, had no business interfering with his looting.

When the clergy spoke out against his perversion of society he poked them with his red-hot fork.

By far the biggest recipients of Zuma’s humiliation were ordinary South Africans – the middle strata and the working classes. Zuma’s thieving and destruction of the economy worsened their suffering. Under him the economy stagnated and went into reverse – preventing the poor from emerging from poverty and driving the middle classes to embarrassing indebtedness.

The erosion of systems in government and state-owned enterprises stymied delivery and condemned millions to undignified conditions in their homes and communities.

There can be no greater humiliation to a citizenry than being violated in the way the Gupta family did to South Africans – from their landing at our premier airforce base to openly behaving like the de facto government. Zuma gave them licence to violate us and looked on, giggling, as they did.

Ramaphosa’s need to tread carefully in this political minefield is well understood. But to expect South Africans to acquiesce to the non-humuliation of this man is asking a bit much.

And I say this with the halo hovering above my head.