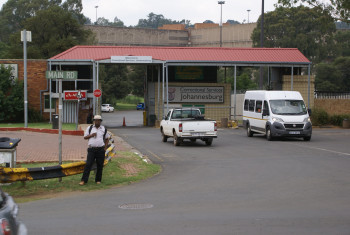 Fourteen inmates of Johannesburg “Sun City” Medium B prison yesterday told the High Court that they were going up to 20 hours between the last meal of the day and breakfast. The case cast an interesting light on conditions in the prison, with allegations that prison guards are dealing in drugs, according to GroundUp.


Sifiso Ndlovu, in leg shackles and representing the 14 inmates, told the court that all Medium B prisoners were served both lunch and supper at 1pm each day because the prison lacked sufficient staff to provide the evening meal at the appropriate time. Breakfast was served at 8am each day, meaning all three meals were crammed into five hours. The inmates were expected to keep their suppers in their cells for later consumption, after lock-down at 3:30pm each day.

The case provided an insight into the conditions in the prison known as Sun City. Asked by the judge why the prison could not employ additional staff to ensure inmates were served their evening meals at the appropriate time, Advocate Marumo Moerane, for the state, replied that a Labour Court ruling prevented prison officials from changing shifts. This 2010 ruling referred the matter to the relevant Bargaining Council, which still had not resolved the issue.

Moerane further replied that budgetary constraints applicable to all prisons across the country had made it difficult to fill positions.

In its affidavit to the court, the Department of Correctional Services claimed that all meals conformed with the requisite “ration scales”, but admitted that the evening meal could not be served at the appropriate time due to lack of staff. Of the 710 approved prison posts at the prison, only 440 were filled.

Ndlovu told the court that many of the poorer inmates traded their evening meals for cigarettes, a form of currency inside the prison. Some HIV-positive inmates were unable to take their medication at the required time of 8pm due to their “having no food in their stomachs,” said Ndlovu. This was denied by the Department in its replying affidavit.

Inmates present in court told GroundUp that the evening meal consisted primarily of bread and jam or margarine, with an occasional egg. “I’ve been 17 years in prison, and it’s always been like this,” said Ishmael Moshoeshoe, one of the applicants in the case. The bread had to be stored in lockers or under beds, and was already several days old by the time it was handed out to prisoners.

The Correctional Services Act states prison meals must be spaced not less than four and a half hours apart, and not more than six and a half, “except that there may be an interval of not more than 14 hours between the evening meal and breakfast.”

The Department of Correctional Services argues in its affidavit that “supper is offered to the inmates at the same time as the lunch, but to be consumed after lock-up” at 3:30pm.

The judge asked whether the Department could disregard the provisions of the Correctional Services Act. Moerane replied that no prison in the country was able to comply with the legal requirement to allow no more than 14 hours between the last meal of the day and breakfast the following morning. But the inmates told GroundUp about several other prisons where prisoners received meals properly spaced throughout the day.

“The night time is when most of the dangerous incidents occur, ranging from inmates igniting fires in and to the prison to attacking other inmates, threatening other inmates and gang activities,” says the Department’s affidavit. There is just one night duty official for between 400 to 600 inmates. “The problem with working with skeleton staff at night, when some incidents occur, is a great security concern for the [Department]. This has a bearing on when the last meal of the day is supplied to the inmates.”

When the Bargaining Council resolved the issue of prison officer shifts, the Department would be able to increase its staff complement so as to serve the evening meal at about 6pm, the affidavit said..

The inmates also asked the High Court to force the Department to pay over 5% of the profits from the prison canteen, as required by the prison procedure manual, and for the Hawks to investigate why no payments had been received since 2011. The Department replied that the audit of the canteen books between 2011 and 2017 had just been completed, and a sum of money paid over to the inmates’ sport and recreational fund.

The inmates also told the court that since 2015 they were no longer allowed to bring snacks from the prison shop to their cells. Previously, when visiting family members and friends purchased items for them from the shop, they were allowed to take these to the cells. This was discontinued as a security measure, apparently to prevent drugs being smuggled into the prison.

Inmates told GroundUp that drugs were freely available in the prison, though it was prison guards rather than family members who were smuggling them in.

The Department’s affidavit says inmates were buying large quantities of groceries from outside the prison “which was posing a security threat.” A few inmates would purchase everything from the shop, leaving others with nothing to buy. They would then illegally re-sell groceries in the prison at very high prices to other inmates.

Moshoeshoe made news last year when he told a visiting Parliamentary Portfolio Committee on Justice and Correctional Services that prison conditions under apartheid were better than under the current government. He lambasted overcrowded conditions in the prison, and lack of basics such as uniforms and blankets. One cell housed 68 inmates, who were required to use just two toilets.