Inside the Gupta grand heist 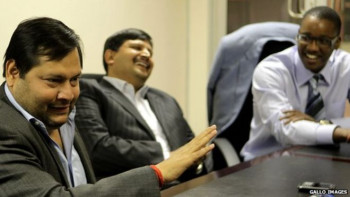 A sensational preservation order granted this week against Gupta-owned companies has exposed a grand conspiracy by the family to steal money from the state with help from senior politicians and government officials, says City Press.

The application cites Atul Gupta in his personal capacity as having received millions of rands stolen from government.

President Jacob Zuma’s son Duduzane was a director of at least one of the Gupta companies involved in the looting.

Of the R220.2m transferred to the project by the Free State government for the agricultural project, only 1% of it – R2.45m – was spent on actual farming.

Most of the remaining money went to individuals and entities associated with the Guptas.

The Asset Forfeiture Unit’s papers also appear to indicate that the criminal charges that those involved in the “corrupt relationship” between Gupta entities and the state are likely to face will include fraud, theft, corruption and money laundering.

The application attached to the order also exposes Duduzane, Atul and Rajesh (known as Tony) Gupta, and Gupta lieutenants Ronica Ragavan and Salim Essa as directors of companies behind the looting of R220.2m from the Free State department of agriculture.

The assets will now be placed under the curatorship of Eugene Nel.

Also placed under curatorship is the “remaining extent” of the 4 440 hectare Krynaauwslust farm in Vrede.

The unit’s application also exposes then Free State agriculture MEC Mosebenzi Zwane – now the minister of mineral resources – as having identified the land for the dairy farm outside Vrede “in a remote area ... specifically chosen in avoid detection”.

The rural town of Vrede, which has a population of less than 20 000 people, is about a four-hour drive from Bloemfontein.

“The project was specifically chosen on the advice of then MEC [Zwane], even though no feasibility study had been conducted prior to it being chosen,” the court papers state. Estina also received a 99-year lease from the department, but paid no rent.

The papers also expose how the project, entrusted to Gupta-owned company Estina, was simply a vehicle for looting, was callously established under the guise of the department’s Zero Hunger Programme, and was sold as a way to benefit emerging black farmers, even though none was identified.

The Zero Hunger Programme is a national government initiative that is meant to alleviate the plight of the poorest citizens in the country.

The application also shows how, when the department deposited money in seven tranches of tens of millions into Estina’s bank account, the cash was paid out within days to the Guptas and their companies, leaving the bank accounts dry before the next tranche of money was paid in and the accounts were looted again.

The Guptas and their companies that received cuts of the R220m between April 2013 and May 2016 include: Summons will also be served on former Estina employees, including Kamal Visram, the IT professional previously employed at the Guptas’ Sahara Computers, who ran the farming business, as well as curious payments of R19m to “Sanlib Bedford Gard” and R4.5m to Uxolo Diamond Cutting Works.

City Press called Atul Gupta several times, but he did not respond.

The court papers paint a damning picture of how Estina was established and for what purpose.

Schalkwyk explains in his affidavit that he obtained a statement from Thabethe in which he was told that, shortly after he was appointed to head the province’s agriculture department, he went on a trip to India in February 2012 with a “Mr Narayana, an adviser to the office of the premier [Ace Magashule] at the time ... to conduct research into how they produced milk”.

“Thabethe identified the company by the name of [Indian milk producer] Paras Dairy, where the research was going to be conducted. Paras was identified through the aid of internet assistance,” Schalkwyk writes.

“After the trip to India, he developed an Executive Council [provincial cabinet] report carrying recommendations into the concept of the dairy project ... The Executive Council’s report was approved.”

Thabethe further told Schalkwyk that Paras’ chief executive visited Vrede and “developed an interest to participate and invest in the project. A partnership agreement was developed between Paras and Estina.”

Thabethe also told other investigators that, after his department “saw an opportunity of the province becoming a large player in the dairy industry”, he “researched the industry and identified India, Germany and Sweden as suitable partner countries, and that he subsequently discounted Germany and Sweden because they were First World countries and were too advanced”.

The month after he returned from India, Thabethe said “representatives of Paras [and] Estina” made a presentation to the department, in which they said they were in business together.

Although he told investigators he had done some internet research, he couldn’t provide the addresses of the websites he looked at.

Thabethe could also not provide Treasury officials with any proof that Paras was involved in the scheme at all.

The court papers also contain business proposals drawn up by Estina, which state that the “vision and mission” of the project was to “create a large-scale, integrated, self-sustainable dairy project” to “benefit black farmers”.

“We are committed to our values of trust, honesty and integrity as the core of our approach to business,” one of the plans read.

It also promised “aggressive marketing campaigns using celebrities and sports icons as brand ambassadors”, as well as bulk supply of milk to hospitals and schools.

In his affidavit attached to the application, financial investigator Nkosiphendule Mradla who works at the Asset Forfeiture Unit in the Free State, and who laid the original police complaint, said that payments to the Gupta companies were made in “round figures”.

“No legal business would make invoices and payments only in round figures,” he stated, adding that only “R2 425 461.28 out of a total amount of more than R220 202 652 was desribed as relating to farming activities”.

In his founding affidavit, Asset Forfeiture Unit head Knorx Molelle asked for the preservation order to be granted urgently, saying that “there is a real likelihood of the funds being moved or dissipated to offshore accounts in jurisdictions which South Africa does not have any mutual legal agreement protocols for the repatriation of the said funds, thus defeating the very purpose and objective of this application”.

“I submit the entire project was a mere facade right from the outset that was aimed at providing a veil of legitimacy to what was evidently a scheme designed to defraud and steal monies from the department.”

Estina applied for voluntary liquidation in May last year.