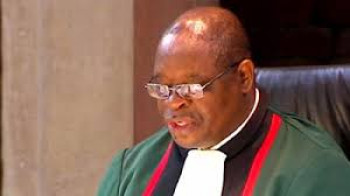 With the axe of a recall by the ANC hanging over his head, President Jacob Zuma has capitulated and allowed Chief Justice Mogoeng Mogoeng to select a judge to head a judicial commission of inquiry into state capture, writes Adriaan Basson in News24.


Zuma announced on Tuesday evening that Deputy Chief Justice Raymond Zondo (pictured left) would head up a well-resourced investigation into "all forms of corruption" that have created the perception that "the state has been wrestled out of the hands of its real owners, the people of South Africa".

By doing so, Zuma was complying with the wishes of former Public Protector Thuli Madonsela. In her report, State of Capture, Madonsela found that Zuma was conflicted through his family's business relationships with the Gupta family in appointing a judge to head the commission.

Zuma made the announcement less than 24 hours before the ANC's new national executive committee (NEC) was scheduled to meet – and possibly discuss recalling him as president of the country.

This comes after Ramaphosa and Zuma met in Durban on Sunday. NEC members told News24 on Tuesday that Ramaphosa was expected to ask Zuma to go.

The appointment of the Zondo Inquiry shows that the balance of forces in the ANC has shifted and that Zuma no longer has the power to engineer the commission of inquiry according to his wishes. A prolonged appeals process would have delayed the inception of the commission by months, if not years.

In his statement on Tuesday, Zuma said that he was taking "further legal advice on the prosecution of this appeal. I am concerned that this matter has occupied the public mind for some time now and deserves urgent attention."

Zuma is now only appealing the orders "to the extent that they set a particular precedent for the Office of the President of the Republic and are indeed deserving of legal certainty".

The terms of reference for the commission and the extent to which Zuma was able to influence these will be instructive.

In his statement, Zuma made it clear that Zondo should not only focus on the subjects of Madonsela's investigation (read: the Guptas and the Zumas), but on "all those who may have rendered our state or parts thereof vulnerable to control by forces other than the public for which government is elected".

Supporters of Zuma and the Guptas have long argued that so-called white monopoly capital was the original perpetrator of state capture.

"There should be no area of corruption and culprit that should be spared the extent of this commission of inquiry," Zuma said.

The president repeated his concerns about the "unprecedented legal implications" of being forced to let Mogoeng select a judge to head the commission.

"I have expressed my reservations about the legality of this directive, which may be the subject of the appeal. I would like to emphasise that I have faith in all the judges and their ability to execute their tasks with the requisite levels of fairness, impartiality and independence."

Although Ramaphosa's supporters will see Zuma's announcement as a victory, it may also have prolonged Zuma's time in office for "doing the right thing".