Cyril leads a house divided after a deal with the devil 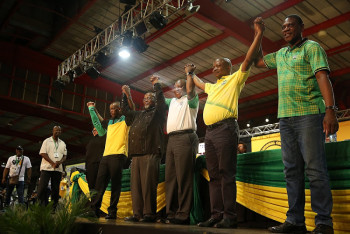 The rand strengthened on news that Cyril Ramaphosa had been elected leader of the ANC. But with that came some cruel baggage, including individuals who have been compromised by the state capture scandal, who now join Cyril at the top table, writes Carol Paton in Business Day.

Cyril Ramaphosa has won the ANC presidency but to do it, he made a deal with the devil. In a cruel twist, the man who was never acceptable to his backers — Mpumalanga premier DD Mabuza — has also won big and will be at his side.

Mabuza now stands in line for the ANC presidency and, if the ANC survives long enough, could one day be president of the country.

Others who are deeply compromised by the state-capture scandal – Free State Premier Ace Magashule and deputy secretary-general Jessie Duarte – also took their place at the top table.

When the commission of inquiry into state capture finally happens, both these leaders will be implicated. Magashule in particular could face criminal charges.

The result of the elections at the party’s national conference on Monday will be more of the same: for the past five years, the ANC top six has been split equally in two. The split has resulted effectively in paralysis, and the party stood by while its president abused his power time and again. Now it will be paralysed again.

What is the chance that President Jacob Zuma will be forced to step down before the end of his term?

What are the prospects for a dramatically revised Cabinet or will we be stuck with Energy Minister David Mahlobo and, worse, Social Development Minister Bathabile Dlamini?

This was why Mabuza’s "unity" effort during the lead-up to the conference did not fly with the Ramaphosa camp. Mabuza tried hard to get a place in the top-six positions of the CR17 slate.

But despite his kingmaker status at a critical point in the race — when he commanded his troops not to pick a side and vote for "unity" — his reputation as a "strongman" who has presided over corruption and political coercion was too unpalatable for many in the Ramaphosa camp to swallow.

More importantly, his overtures were rejected because, to get the full benefit of the change in leadership and to manufacture a "Cyril moment", Ramaphosa needed to make a decisive break with the Zuma years.

That opportunity has now been squandered.

If the unity option will be bad for the country, why did Ramaphosa go for it?

On Sunday, the day before the vote, things were looking grim for the Ramaphosa camp. There was panic that the numbers were not as strong as previously thought. In particular, there was a tussle over delegates from Mpumalanga, who were previously believed to be with them, but were wavering. Without them — and without the co-operation of Mabuza — victory was not possible.

Gauteng ANC chairman Paul Mashatile was also a key figure in the horse trading. Mabuza and Mashatile, the new treasurer-general, won with the biggest margins of all the officials.

As age peers who are both desperate to move out of their provinces and onto the national stage, it would not be far-fetched to assume they gave each other a pledge of co-operation, cutting Ramaphosa in on the deal. In the end, it was these two provincial chairmen who were the real power brokers behind the scenes.

Lindiwe Sisulu, who had been on the Ramaphosa slate as deputy president and was dumped at the 11th hour, was visibly angry at the outcome. Sitting apart from other members of the outgoing national executive on the stage on Monday evening, she looked rigid with fury.

It is possible that Ramaphosa and Mashatile thought Mabuza and Duarte (who was way more popular as deputy secretary-general than Ramaphosa’s pick, Zingiswa Losi, who is not well known in the ANC) were devils they could live with. What they did not expect was that Magashule would also be elected, putting the ANC’s organisational machinery back in the hands of a Gupta-Zuma ally.

Magashule’s election brought the biggest gasp from the delegates when it was announced.

He won by a mere 24 votes against Ramaphosa candidate Senzo Mchunu. It was a big upset and the biggest strategic mistake.

With such an incredibly close contest, the balance of the election of members of the national executive committee will be more important than others.

The difficulty is that even if Mashatile and Mabuza pull off a majority among the ordinary members, the committee functions by consensus and not by a vote.

To pass a decision, especially one of critical importance — such as Zuma’s recall — requires an overwhelming majority.

While Ramaphosa may be able to make some difference, expect the next two years until 2019 to be more like business as usual.