Zim: the genie of freedom has been uncorked and won't go back in the bottle 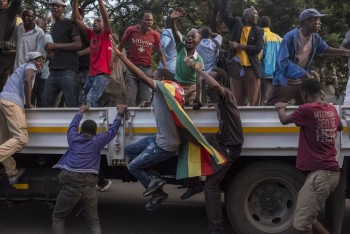 Zim opposition member of parliament Eddie Cross reports on the events of the last few days, culminating in the resignation/removal of Robert Mugabe and his coterie of "criminals" from power. There is a palpable sense of freedom in the country, but we should be modest in our expectations. Zanu-PF has signalled its intention to go it alone in government, without inviting opposition parties to the table. A million people gathered on thre streets of Harare in the last few days to bid the old man good riddance. The genie of freedom has been uncorked and will not go back in the bottle. Long-suffering Zimbabweans are in no mood to entertain another dictator dressed up as a saviour, if that is what Mugabe's successor Emmerson Mnangagwa has in mind. These are interesting days indeed.


Last night Mr. Mugabe nearly gave the entire country a heart attack. In the late afternoon a ZTV outside broadcasting unit was driven into State House where Mr. Mugabe and the Military Commanders were negotiating his departure from Office. After Saturday when millions of Zimbabweans took to the streets to call for his retirement and then the Sunday meeting of the Zanu PF Central Committee at which he was summarily dismissed from the leadership of the Party and replaced by Emmerson Mnangagwa, we all expected a humble and contrite Mugabe to announce he was stepping down.

We waited from 19.00hrs to 21.00hrs for him to come on TV live and when he did the setting was quite bizarre. He was sitting behind what looked like a coffin draped in a white sheet, behind him were two flags and on either side, were the Commander of the Armed forces, General Chiwenga and on the other side a rather rotund Catholic Priest. An apt setting for the last rites with both executioner and Priest present. Then there was an honor guard of what must have been 20 senior Army Officers in one long row.

What then followed was equally bizarre. He spoke for about 25 minutes, losing his way and not reading well, but it was a rambling discourse and only vague references to the massive protests on the streets on Saturday and no mention of the Zanu PF meeting that morning or his change of status – in fact the only thing he said about the future was that he would “chair the Zanu PF Congress in a few weeks time”. What was quite clear and perhaps this was the main reason for this farcical exercise, was that this is a very old man, barely able to read, obviously senile and with little understanding of the situation, and clearly in deep denial.

What perturbed me was the statements at the Zanu PF Central Committee meeting that Zanu PF would not do any deals with the MDC T and would not form a national Government in any sense, they would carry on as before, simply with new Zanu PF leadership. My view is and has always been, that this is simply not sustainable – Zimbabwe is in a deep political, social and economic crisis and unless arrested in the very near future, this is going to do irreparable damage to the economy which already can hardly function. Our national debt is now over 200 per cent of GDP and cannot be serviced.

The Treasury Bills held by Commercial banks exceed their capital by a wide margin and the State is unable to either service the interest or to redeem them at face value. Inflation is already at hyperinflation levels and accelerating fast. Discounts on all local forms of money are rising and now stand at between 40 and 80 per cent. Earnings on exports are being converted into local currency at official rates and this will lead to a collapse of the firms involved. The fiscal deficit this year could be US$2,2 billion with revenues of $3,8 – completely unsustainable.

These structural problems cannot be addressed without a return of confidence and reengagement with the international Community. A Zanu PF government made up of individuals drawn from the Party simply cannot fulfill those conditions. They will simply change the guard at the top and our problems will become that much worse. Isolation and economic decline will continue.

So Zanu has to force Mr. Mugabe from power, the time for games and theatre are over. They cannot go back and neither can Mr. Mugabe and his allies. The country will not accept the status quo and real trouble could be around the corner if this does not happen. But the MDC T cannot allow regime change that does not address our problems, both political and economic. We do not need an unreformed Zanu PF regime that has beaten and killed our members for 17 years, stolen elections and failed to implement the reforms needed for free and fair elections. We have every right to demand change and right now Zanu PF cannot get out of its conundrum without us. Interesting days.

Assessing the mood of the country

When Mugabe set his face to the wall and refused to resign, the Team Mnangagwa decided to follow a different route to the same goal. They set about persuading the Zanu PF Party to expel Mugabe and for the Members of Parliament to impeach him next week and thereby kick him into touch. At the same time, they recognised that they had to shield the process from regional intervention by the SADC States and South Africa.

The first step in the latter exercise was the decision to call for demonstrations in Zimbabwe to show that the people of this country overwhelmingly support the military intervention and the removal of this stubborn old man from the seat of Government. The call went out on Thursday and Friday and various organisations responded by organising rallies and marches in the different urban areas of the country.

In Harare I decided to visit all the sites to assess the mood and the response. Well what a day! By midday an estimated one million people had gathered at the Zimbabwe Grounds in Highfields which has such symbolic significance as the seat of African Nationalism in the Rhodesian era and the site where Robert Mugabe made his first speech after taking power in 1980. It was an extraordinary sight with tens of thousands on roads jammed with traffic in every direction.

In the City itself crowds formed everywhere. The atmosphere was relaxed and cheerful. Soldiers on duty were hugged, posed for selfies and cheered at every turn. One group even insisted on cleaning their boots!! Flags were everywhere. No police – gone were the feared riot police, no tear gas, no threats, no road blocks. No windows were broken, no cars burnt, no stones thrown.

Even the weather played along. It was dry, cool and overcast, perfect weather for the day and it was like that all over the country. It remained like that right into the night and I think it was a late night for many. It was the same in all Cities, for once this country was at one and everyone had the same message – Mugabe must go, and SADC and South Africa must let us do this thing our own way.

What a day. I do not think many will forget that day and for sure now, the Mugabe era is a closed book and a new day is dawning for our long-suffering people. I was contacted this morning (Sunday) to say Parliament is sitting on Tuesday. You all know what that means.