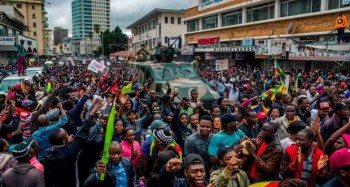 Robert Mugabe, the former president of Zimbabwe, has been granted immunity from prosecution and a $10m lump sum golden handshake. In the view of many Zimbabweans, this is a small price to pay to get rid of the old man and his wife, Grace, who had ambitions of succeeding her husband. Now the hard reality sets in. The new president Emmerson Mnangagwa delivered an inauguration speech on Friday that sounded very much like the opposition Movement for Democratic Change (MDC) policy platform - re-engaging with the wider international community, tackling corruption, sorting out the thorny land reform issue (and whether and what to pay white farmers who were dispossessed without compensation). In this article, MDC representative Eddie Cross spells out the challenges that lie ahead. The optimism of Zimbabweans has never reached such heights. Will it be short-lived?


I am a veteran of the struggle for freedom and democracy in Zimbabwe. I seem to have been at it for a century, but I have never seen such scenes in the country. First Saturday when spontaneously millions of Zimbabweans demonstrated for Mugabe to go. Then Sunday when the Central Committee of the Zanu PF Party (however constituted) voted to remove both Mr. and Mrs. Mugabe from their positions in the Party. Then the let down that evening when Mr. Mugabe came on Television and said he was going nowhere, he was “President” and “Commander in Chief”.

The City of Harare woke up on Monday and it was very quiet all day – fewer cars on the roads and little business going on. Towards noon on Tuesday people started gathering at African Unity Square for prayers and we concluded meetings of our (MDC) leadership to decide what to do in Parliament that afternoon. When I arrived at Parliament, the entrance was surrounded by media and a crowd of several thousand was gathered over the road in the Square.

Inside we started the process of impeachment with the Speaker reading out the motion and the charges against Mugabe, then the rules for the special joint sittings of the House and the Senate. The international press must have been amused by the tradition and the ceremonial nature of the process at that stage. Once he was done, we stood down and then left Parliament to go to the venue for the Joint Sittings which was the Harare Conference center. By 16.30 we were seated with perhaps 2000 people in the gallery.

At 16.45 the bells were rung and exactly on 16.50 the Speaker and the President of the Senate walked in and we started the proceedings. The two Members putting up the motion, one a Senator and one a MDC Member of Parliament, then proposed the motion to impeach. The debate began and about 17.30 and the Speaker interrupted proceedings to announce that he had received a letter from the President. This was then read out and when it came to the part about him “tendering his resignation with immediate effect”, the place exploded. It took several minutes to restore order and then he suspended the session indefinitely. We filed out to find that the entire country was pouring out onto the streets and a massive street celebration was underway.

The main result of these mass demonstrations and events is that the international and regional communities now know that what has transpired has the support of the great majority of all Zimbabweans. The fact that it was the army that was the trigger, has little significance providing they go back to barracks when the new President is sworn in – something I expect to happen this week (on Friday). This gives, whatever government comes in over the next few days, very little breathing space before it has to deal with the very tough issues that are on the table for the new regime.

First of these is the national Budget which was supposed to be presented to Parliament on Thursday the 23rd November. The country will run a huge fiscal deficit this year after the US$1,4 billion deficit in 2016. The economy is shrinking, and inflation is suddenly accelerating. The budget is the only policy instrument available to the government and whatever was planned by the Minister of Finance (who is now in jail) will have to be reviewed and changes made. We have until the end of January to get this done – but there is a lot to do and this will take some time.

Then there is the issue of reengagement with the international Community. This is essentially a political process which must be concluded before any talk of an IMF guided stabilization and recovery plan can be considered or talks with bilateral development Partners initiated. The new government has to persuade the international community that it has a plan to get us to a free and fair election as soon as possible so that the regime in Harare can replace its temporary legitimacy conferred by the street, with democratic credentials. This process must be set out in clear terms with guidelines, targets and timelines.

This in itself will not be a short process. It will involve the full implementation of the 2013 Constitution, the restoration of the rule of law and the independence of the Judiciary, the removal of all restrictive legislation such as POSA and AIPA. We will need a complete overhaul of the enabling legislation for elections and the selection and appointment of an independent electoral Commission. We will have to reform the armed forces to bring them under full civilian control and to disband the Joint Operations Command which has been responsible for much of the manipulation and rigging of elections in recent years. We will have to restore the independence of all traditional leaders in the country and ensure that the media is free and unfettered by the State in any way.

The MDC Leadership has already called for the next election to be supervised by the UN or one of its Agencies. All of this is a tough call for the incoming administration but progress beyond this is going to impossible.

Once the doors to reengagement have been opened, the question of economic policy is going to come to the fore. Again, the list of things that will have to be attended to before the IMF can consider resuming implementation of the Lima Agreement of 2016, is a lengthy one. It will begin with the reduction of the fiscal deficit from 15 per cent of GDP to 3 per cent by both reducing recurrent costs and increasing State revenues. Both are going to be difficult to achieve as Zimbabweans are already heavily taxed and any cuts in employment costs are going to be very unpopular.

But in the wider economy, the new government is going to have to amend or remove the Indigenisation Act and its Regulations, it is going to have to stop the fiscal bleeding through the 105 State Owned Enterprises, its going to have to give the Reserve Bank complete autonomy to tackle monetary system reform and to protect Bank security and it is going to have to take steps to restore the viability of all export firms. The vexatious issue of land reform must be revisited and cleaned up by paying compensation to the farm owners who had their land taken from them without compensation. Then what to do with the millions of hectares of farm land that is affected by this exercise.

Finally, the government is going to have to deal with the national debt which now stands at over US$30 billion if farm compensation is included as a contingent liability. There is absolutely no way that this can be attended to by the State on its own and this must be a central issue for the Lima process.

Tough call – but not impossible and whatever else the new President is planning, it is these issues that will occupy his time in the next 3 months. For today he has arrived in Harare, will be sworn in as President on Friday and then take up these issues on Monday with a new team of Ministers who will have to share the burden of leadership. The honeymoon will be very short.