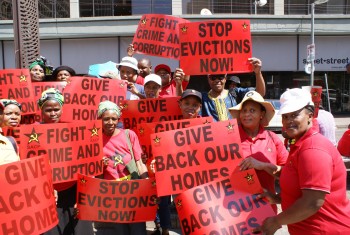 Ernest Mashaba and his family were evicted from their home four times after Nedbank repossessed the property at auction for R10. By Nedbank's version, the family was R1,105 in arrears. But independent legal and financial expert Leonard Benjamin looked into the case and believes the Mashabas were in credit on their account soon after the bank started legal proceedings, reports Groundup.


More than a thousand people have joined the R60-billion court case now before the Constitutional Court on behalf of South Africans evicted by the banks from their homes over the past 20 years.

They are asking the banks to pay damages equivalent to what they lost when their homes were sold at sheriffs’ auctions for a fraction of their market value. They are also demanding a freeze on evictions until Parliament passes new legislation that makes it obligatory to sell repossessed homes at fair market value. In effect, they are asking the court to outlaw the practice of selling homes at auction without a reserve price.

Ernest Mashaba is one of those who has joined the case. It’s been several months since GroundUp first reported on Mashaba’s case. His home was repossessed by Nedbank, after the bank claimed he fell into arrears on his mortgage loan. The bank apparently took default judgment against him in 2001, resulting in Mashaba and his family being evicted from the home multiple times. Each time the sheriff removed his belongings from the home, the Mashabas re-occupied the house, believing the bank had made a mistake.

Mashaba maintains that he never missed a payment and was not in arrears. Nedbank undertook to conduct a forensic investigation into the matter, and GroundUp asked financial services specialist Leonard Benjamin to do the same.

Nedbank’s investigation was compiled by Thozama Mochadibane, head of customer experience and complaints resolution. Benjamin is former head of legal services at Liberty Life, and now an independent legal and financial consultant.

According to the Nedbank investigation, the Mashaba home was repossessed over arrears of R1,105. Benjamin doubts even this was owing.

There are several other points to note about this case. The first is that Mashaba maintains he was never served with a summons by the bank, nor was he aware that there was a judgment issued against him. Had he been aware of the summons, he would have been able to mount a defence and save his house.

Despite a search of the court files by Benjamin, and a request to Nedbank to provide a copy of such a judgment, none could be found. The best evidence that could be located was the sheriff’s power of attorney to effect transfer of the property, but no copy of the judgment.

Legal proceedings were instituted by the bank against Mashaba in February 2001. In 2015, Mashaba lodged a complaint with the Banking Ombudsman regarding the case. Responding to this complaint, Nedbank replied that legal proceedings had commenced in January 1999, at which stage the arrears on home loan repayments were R6,492.

The date on which legal proceedings were launched is critical to the case, since it affects the amount of the arrears. When questioned about this by Benjamin, Nedbank replied that legal proceedings had, in fact, been launched on 28 February 2001, at which point the arrears on the repayments – according to Nedbank – were just R1,105. That’s a lot less than the previous arrears amount of R6,492 claimed by Nedbank.

“These arrears were accumulated as a result of missed payments and short payments during the better part of 2000. This was after the clients had made a payment of R6,979 during December 1999 to bring the arrears up to date,” says Mochadibane in the Nedbank report provided to Benjamin and GroundUp.

Benjamin reconstructed the accounts and argues that within a few months of legal proceedings being instituted, the Mashabas were more than R600 in credit on their home loan. Another discrepancy he uncovered: a double debit of R1,482 for legal fees in September 2002. Nedbank promised to refund this with interest “should you believe and prove” that the charges were duplicated.

“As there are no records available the offer is an empty gesture,” says Benjamin.

Despite the low arrears amount – just R1,105 according to Nedbank and even this is contested by the Mashabas – the bank decided to sue them because it came to the conclusion that “the clients were no longer in a position to bring the arrears up to date and maintain future monthly instalments”.

Though questioned by Benjamin, Nedbank did not detail what dealings it had with the Mashabas before commencing legal action, and on what basis it decided to repossess and sell their home, other than “a broken payment pattern”.

“Within months of the legal proceedings being initiated, the Mashabas had made good their arrears and were, in fact, R600 in advance,” concluded Benjamin.

Though Nedbank repurchased the home for R10 at auction, the bank says it then credited the Mashabas’ account with an amount of R69,990, which it claims was the “fair market value” of the house (R70,000 less R10). At that stage, in 2002, the home loan balance (amount outstanding on the loan) was R54,000 and Nedbank calculated that a credit of R15,639 was due to the Mashabas. The amount was, however, set-off against legal fees and outstanding rates and taxes of about R16,000.

Nedbank could not clarify how much of this went to legal fees, meaning, Benjamin says, that the Mashabas may have been charged legal fees of R9,000 or more to collect a debt of R54,000.

Benjamin was asked to conduct an investigation into the matter by the Lungelu Lethu Human Rights Foundation.