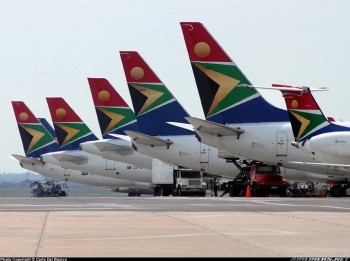 Sooner or later the government is going to have to confront selling off SAA, the national airline, just as it is now considering selling its shares in Telkom to meet its groaning revenue targets. This would not mean the end of the national airline. It is something multiple airlines around the world have faced with stunning success, as James Peron points out.


It’s described as “another state-run airline deep in debt, backed by bailouts and beholden to bureaucrats”. You might think it’s from another article on the mismanaged South African Airlines but, as the American baseball player Yogi Berra is reputed to say, “It’s déjà vu all over again”. This time, it’s Air India.

India’s Aviation Minister, Ashok Gajapthi Raju, says it just can’t keep going on as it has been because “I can’t commit the taxpayer’s money for eternity to keep it going”.

Mr Raju’s sentiments are similar to those expressed by the South African National Civic Organisation (SANCO) regarding the bailout of SAA, which they called “a waste of resources thrown down a bottomless pit”.

Finance Minister, Arun Jaitley, admits Air India has taken massive bailouts and “that money is government’s money, that’s your money. It could have been used for school education”.

Raju says he doesn’t “mind where it is, who runs it, as long as it serves the Indian people and our Indian skies”. “Whether it’s owned by government, owned by [someone else],” he says, “we’d like it to survive.” He recognises that sometimes, when a state-owned enterprise is so badly managed, its very survival, instead of being threatened by privatization, is assured by it.

Minister Jaitley said that, to protect Air India, they didn’t regulate private competition out of the markets, and today the flag-carrier has 14% market share. “If 86% of flying can be handled by the private sector, so it can also handle 100%.”

The former CEO of Jet Airways, Steve Forte, described how privatisation of airlines tends to work: “It will be very painful at first, with manpower, fleet and route reductions, but then, as the airline will slowly emerge from the darkness, it will have a chance to grow again in a profitable way.”

Continuing debt is like disease, the longer you let it go on, the worse the final results. Eventually it’s enough to kill you.

But there is life after death – at least for badly run state-owned airlines. Kenyans Mulaku Ochieng and Anwar Ahmed looked into the privatisation of Kenya Airways Ltd.

Ochieng and Ahmed found privatisation reduced “government expenditure due to the withdrawal of direct subsides. Prior to the privatisation process, there was a physical drain on the national treasury as the government was heavily subsidising Kenya Airways…” Kenya Airways went from being a wealth destroyer, to become a wealth producer.

SANCO’s Jabu Mahlangu wisely warned that a bailout “sets a bad precedent that Treasury will always step in wherever there is incompetence and mismanagement”. This leads to “robbing our communities of much needed resources to address the housing backlog, free education, as well as tackle poverty, unemployment and inequality”. SANCO wants management to be held responsible.

Kenya’s experience, according of Ochieng and Ahmed, did just that. They found the sale “led the management to focus on profit goals because now under private ownership, they were directly supervised by shareholders. That is why the change in ownership from public to private resulted in an increase in the profitability of Kenya Airways”.

Pakistani journalist Sabir Shah wrote that state-owned airlines the world over have “been found plagued with menaces like excessive debts, over-staffing, political interference and poor management – leaving the policy-makers at the helm of affairs with no other option but to think in terms of privatising…”

One important lesson to be learnt from all of this is that the incentives in an entity controlled by bureaucrats winning political appointments are vastly different from those in a normal, depoliticised market.

The problems related to state-owned enterprises are found everywhere, no matter which continent, no matter the politics of the ruling governments. Bureaucratic management lacks the incentives found in depoliticised markets. Managers act differently because the incentives are different.

Sabir noted how much-praised British Airways, though “over-staffed before its sell-off”, went from requiring an average input from government funds of £189 million per annum in the early 1980s to profits that “soared past €1 billion (£730 million) after tax”.

Raj Chari of Trinity College, Dublin, looked at “Life After Privatization”. Back in 1987, the troubled British Airways was privatised in “an offer which was eleven times oversubscribed, the estimated proceeds amounted to approximately USD1.34 billion.”

After the privatisation, one of the first things British Airways did was expand by purchasing British Caledonian and later merging with Spain’s flag-carrier Iberia Airlines.

Originally founded as a private airline, Iberia was nationalised by the fascist regime of General Franco in 1944. It too “suffered from low profits, high debt to equity rations and an aging fleet that justified two large capital injections”, according to Chari. Finally, Iberia was privatised and merged with British Airways in 2011.
Lufthansa was another failing state-owned enterprise until it was privatised in 1991. Lufthansa bought newly privatised Swiss International, itself formed out of bankrupt Swissair, another state-owned airline.

By 2016, Lufthansa was flying about 110 million passengers and the British Airways group was flying 101 million. They were only exceeded by Ryanair, which has always been privately owned.

Privatisation doesn’t have to mean the end of an airline. It can mean a new beginning, one that allows an airline to grow from strength to strength.

South African Airways, with so many assets, may well prove to be another example. If anything, the airline is undervalued today because assets, in the hands of poor managers, have a lower value than the exact same assets would have in the hands of competent management.
James Peron is President of the Moorfield Storey Institute