Gigaba's budget runs out of other people's money 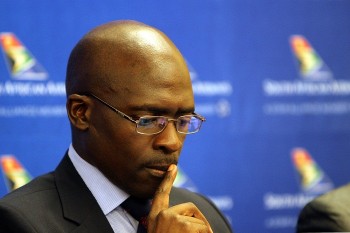 Finance minister Malusi Gigaba's medium term budget is bereft of ideas. In the words of former UK prime minister Margaret Thatcher, the problem with socialism is you eventually run out of other's people's money. Here is a budget that makes it clear the money has run out and the government has no idea how to solve the problem - so, all major decisions have been deferred to February next year. The welfare state continues to grow, government hopes spending on infrastructure will ignite growth, and the projected revenue shortfall of R50bn may have to be settled through the sale of Telkom shares and other state-owned assets. Business Day reviews the highlights.


Finance Minister Malusi Gigaba has kicked the can down the road, delaying all major decisions on the budget until February, allowing the budget deficit to balloon and the expenditure ceiling to be breached.

In a medium-term budget policy statement that was bleaker than most in the market had anticipated, Gigaba said in his speech in the National Assembly that he was giving an honest view of the challenges facing the country.

The numbers said it all. While most economists had anticipated revenue shortfall of about R30bn, the number is now expected to be R50.8bn below February’s target.

The magnitude of the growth in the deficit was also higher than anticipated.

Treasury’s pledge that gross debt would peak at 52.9% by 2018-19 and then stabilise also fell by the wayside. Debt is now projected to continue rising beyond 2021-22 where it will reach 60.8% of GDP. Debt costs will constitute 15% of revenue by the third year of the medium-term framework.

The breach in the expenditure ceiling was due to the bail-out of stressed state-owned enterprises, in particular South African Airways (SAA) and the South African Post Office (Sapo), to which an additional R13.7bn will be transferred in the 2017-18 financial year. SAA gets R10bn of that and Sapo R3.7bn.

The statement says the government remains intent on selling state assets to bring the expenditure back under the ceiling by the end of March 2018.

It plans, for instance, to “dispose of a portion of its Telkom shares … with an option to buy them back at a later stage”.

The statement also suggests that the 2.6GHz broadband spectrum is available for immediate allocation.

National Treasury director-general Dondo Mogajane said all state assets must be scrutinised and not just Telkom, which earns revenue for the state of about R900m a year in dividends.

Should the sale of state assets take place, then the expenditure ceiling will not be breached and the deficit may be smaller than projected.

But most were deferred to the newly established president’s committee, a small group of Cabinet ministers, which will make recommendations to the president on expenditure reprioritisation and asset sales.

Gigaba said the purpose of the new committee was to take hard decisions. It would, for instance, need to look at revisions to spending and the tax framework in the period leading to the February budget.

Overall, the public finances showed a steep deterioration, with wages for public servants — particularly in health and education — and debt costs crowding out spending.

The policy statement says that what is required is “to chart a new course” or the “country could remain caught in a cycle of weak growth, mounting government debt, shrinking budgets and rising unemployment”.

Gigaba estimated that over the medium-term expenditure framework infrastructure expenditure would grow to R948bn, or 5.9% of GDP, in a bid to boost growth and employment.

Gigaba said the majority of economic infrastructure would be provided by state-owned companies, which would spend R402.9bn in the medium term.

He said municipalities were projected to spend R197bn and provincial governments R208bn.

Education was projected to spend R44bn in the medium term building on refurbishing schools, libraries and laboratories.

“Government is embarking on a number of initiatives in infrastructure in order to improve the quality of our infrastructure spending. This includes maintenance of existing infrastructure, improved procurement of infrastructure projects, and better conditional grant terms to eliminate inefficiencies and underspending,” Gigaba said.

He said Cabinet had approved a budget facility for infrastructure that aimed to overcome the shortcomings in the planning and execution of large infrastructure projects.

The facility had already started considering proposals for construction in water, rail, broadband and court buildings, he said.

The immediate market reaction to Gigaba's speech was muted but the rand began falling fast before he had finished speaking.

The R186 government bond took longer to react, with the yield holding at 8.9% until a sharp spike to 9.07% by 3pm. Bonds continued to weaken and by 5pm the yield on the R186 was quoted at 9.18%, more than 32 basis points higher than before the speech began, and 33 basis points weaker on the day.