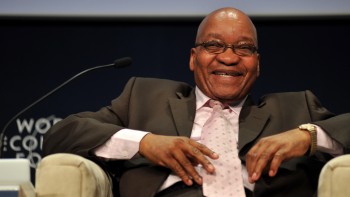 President Jacob Zuma has taken the ANC from a shoe-in at elections to an electoral liability. His reign as president has spawned two break-away parties, and a gaping credibility problem. Could the 2019 elections bring electoral disaster for the ruling party? At last week's ANC national policy conference, Zuma looked to point the finger for the party's problems anywhere but at himself.

On Friday, as he closed his speech before the ANC national policy conference delegates, President Jacob Zuma belted out a liberation song that I last saw him perform almost a decade ago in Polokwane.

It was a poignant moment. It was 2007, soon after Zuma emerged victorious from a bruising battle with former President Thabo Mbeki over the ANC presidency.

The choice of song, Oliver Tambo “awulale ngoxolo” (rest in peace), and the energy it had brought with it, would have given many of the delegates some goosebumps — perhaps even those who disagreed with his election as Mbeki’s successor.

It was not just any other struggle song, but a stern reminder to delegates that, moving on from the brutal Polokwane contest, the ANC needed a leader in the mould of Tambo, who was going to unite the party.

The song was seen as Zuma’s answer to this call. Loud and clear, he raised his hand, declaring that he was the man for the job. It was convincing because, after all, he was “the man of the people”, many among us believed.

Tambo held the ANC together in difficult times when the party was banned and most of its leaders were in exile. Thus the ANC has dubbed 2017 the year of Tambo, which is a clarion call for members and leaders to stop the factions.

Almost 10 years later, as the memory of 2007 flashed before me, I wondered if Zuma still remembered his solemn promise to the ANC.

The ANC has been nothing close to united since Polokwane. In the past 10 years Zuma has given the ANC two breakaway parties, two groups of former MK soldiers who do not see eye to eye and a large body of disgruntled veterans and stalwarts.

In terms of elections Zuma took the ANC from a national majority of 69.6% in 2004 down to 62.1% in 2014. He also lost three of the country’s key metros (Nelson Mandela Bay, Johannesburg and Tshwane) to the opposition and held on to one, Ekurhuleni, by a thread.

And if the trend between local government and national elections is anything to go by, 2019 is likely to be far worse.

These figures speak volumes about the party’s diminishing status as the leader of society. The policy conference marks a monumental moment where the party has to rise the occasion, and it was Zuma’s job to set the tone.

But the man who stood before delegates during the opening of the policy conference did not think he had done anything wrong – and neither did his loyalists, who showered him with the song: Wenzeni u’Zuma, aptly meaning what has Zuma done wrong.

He is upset that opposition parties use the Constitution to challenge his irrational and often unlawful decisions in government. And he wants ordinary ANC branch members to defend him when he is being called out for his flaws in government.

His speech did not even touch on South Africa’s downgrade to junk status, perhaps because that was a direct consequence of his overzealous pursuit of former finance minister.

Despite being at the centre of allegations of state capture by his friends, the Guptas, he wants more information on “who captured whom and how”. Really?

The veterans and stalwarts are dishonest, he lashed out, tacitly adding that they wanted to rule from the grave. Ironically, his speech was expected to provide guidance on how unity in the organisation could be achieved. How discrediting the elders in the eyes of delegates would lead to sacrosanct unity remains a mystery.

He lambasted the ANC deployees on the ground who do not attend to communities and have become arrogant.

In the end it was everybody’s fault but the elephant in the room.