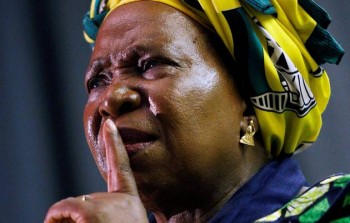 Millions of rands allegedly laundered by a Gupta associate, Eric Wood, were used to sponsor the awards that named presidential hopeful Nkosazana Dlamini-Zuma (pictured left) the South African of the Year two years ago, according to TimesLIVE.

The South African of the Year Awards are run by the Gupta family-owned The New Age Company.

The money-laundering allegations were made by Wood's former business partner, Litha Nyhonyha, in an affidavit. As part of winning the award Dlamini-Zuma received R250,000 in prize money in 2015.

The award was handed over by President Jacob Zuma.

The R10-million allegedly spent on the event has since November last year become a bone of contention in a court action between Regiments Capital and one of its former directors and Wood.

Wood was one of the Gupta associates to whom the confidential cabinet master plan to avoid a ratings downgrade was leaked by brief finance minister Des van Rooyen's advisers in 2015.

Wood is the CEO at Trillian Capital Partners, owned by Salim Essa, another close associate of the Guptas and the president's son, Duduzane.

The legal battle emanates from Wood's departure from Regiments and his partnering with Essa.

The directors of Regiments, Nyhonyha and Niven Pillay, have laid criminal charges at Bramley police station relating to alleged money-laundering involving a total of R15-million in payments made to The New Age Company as a sponsorship for the 2015 awards.

Nyhonyha argued in his affidavit last year, that in their attempts to remove Wood from Regiments, R15-million was paid using fictitious invoices by Wood under the pretext that Regiments were placing adverts in The New Age newspaper. Wood said the R10-million was meant to sponsor the 2015 event and that there was a signed agreement in place.

It was baffling that Regiments was now claiming it did not know, he said.

Trillian said: "You will recall that the ongoing dispute between Eric Wood and his erstwhile Regiments partners, Niven Pillay and Litha Nyhonyha, is essentially a shareholder dispute.

"To pursue their own agenda, Niven Pillay and Litha Nyhonyha have sought to air their dispute in the press as a device to discredit Dr Wood, who has preferred to leave the matter in the hands of the judiciary."

But an insider familiar with the ongoing battle between Wood and Regiments said neither of the two other executives were invited to the event and nor was the company's logo on the banners at the event.

"The other directors knew nothing about this so-called sponsorship. They were not even invited to the function but paid R10-million as one of the sponsors. That money was going elsewhere. In fact there were no adverts placed by Regiments with The New Age [newspaper]," claimed the insider.

Nyhonyha said: "The matter. relates to the issues raised in our court papers in the ongoing legal action against Mr Wood.

"Therefore I am advised that it is not prudent to comment on the matters that are before the court," said Nyhonyha.

Relations between Wood and his former business associates, Nyhonyha and Pillay, soured when the latter two refused to sell a 50% stake of Regiments to the Guptas.

Nyhonyha said in his court papers the company had no choice but to remove Wood after finding evidence of wrongdoing and unlawful conduct.

Nyhonyha claimed in the court papers Wood and Gupta-linked executive Ashok Narayan conspired in a string of e-mails on June 4 to create paperwork legitimising movement of the money.

Copies of the e-mails are attached to the affidavit.

Nyhonyha claimed Wood sent Narayan, a former employee at Sahara Computers, three invoices amounting to R5-million each from Regiments to Technology Procurement Holdings for professional services that were never rendered.

He claimed a day before the invoices were sent to Narayan he had forwarded Wood a signed business agreement between the two companies.

He also sent "corresponding invoices" from The New Age of the same amount to Regiments for advertising.

The New Age has previously declined to comment on the claims and had not responded to requests for comment yesterday.