Zimbabwe is a mafia state controlled by 2,000 super wealthy elites 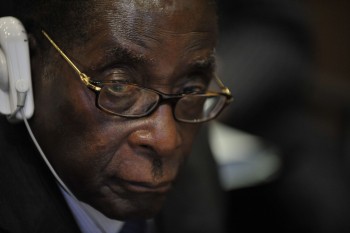 Zimbabwe has become a mafia-run state, where 2,000 super-wealthy elites hold the country to ransom. The Marange diamond field is run by a nest of thieves, who have pilfered an estimated $20 billion. It's a country where whistleblowers are beaten to death. In a country with 80% unemployment, this sends a clear message to the rest of the country - take the money and run, says Zimbabwean member of parliament Eddie Cross.


At Independence in 1980 we (Zimbabweans) had an administration which was reasonably honest and corruption free. I knew of one or two scams but by and large we could rely on a Policeman doing his job and getting Justice from the judicial system. Major corruption on a systematic basis was almost unheard of. For the first few years this record remained intact but gradually corrupt practices crept into the system and as the Civil Service was expanded and it was not possible to raise salaries in line with inflation (I did not get a raise in the first 7 years after Independence, so the living standards of the public service began to decline.

By 1990, corruption had found its way into almost every facet of life and Ministers were demanding bribes for decisions and appointments and ordinary members of the Civil Service had begun to moonlight to increase their incomes, service delivery deteriorated and those responsible began to work out how they could augment their salaries. From then onwards it has been downhill all the way. Recent estimates suggest that upwards of US$80 billion has been lost to the country in one way or another through corrupt practices since 1980 and this may be a conservative figure.

At first discovery and exposure was greeted with shame and social exclusion, a Minister resigned and then committed suicide. But there have been very few examples of such principled action.

Our traditional cultures put a great deal of pressure on all individuals who are working in the modern sector. They are expected to look after the extended family, to accept them when they visit and to respond positively to requests of school fees, hospital fees and even basic food needs. As anyone who knows Africa will confirm, the extended family can be a very large group of individuals and then you still have your clan and your tribe.

So the temptation to steal from your employer is very great and if you do not do so when asked, you can face quite serious social retribution. If you do steal and are caught, there is no shame involved – in fact you may be regarded as a hero who put his or her family first. My concern is not about such petty crime and corruption, but any systematic theft of resources and deliberate plunder of national resources – material or financial.

Today such crime is pervasive, I can think of four ministers in government whom I am prepared to say are honest and not involved in any material corruption – but the rest, 30 of them, are rotten to the core and do not miss an opportunity to make a margin on anything over which they have control. When I made a statement in Parliament in 2012 and said that in my view the output of diamonds at the Marange fields would exceed US$4 billion that year, I was heard in silence, not another person raised the issue or asked how I had reached that conclusion. The only reaction I got was a threat in the House of Assembly from a senior MP from Zanu PF and a threat by the State security agents two days later that I should be careful as they could kill me from the side of the road at any time. I reported the incident with names and force numbers and the registration number of their vehicle, (which was Government owned) but the incident was not even investigated.

In fact this only became an issue, when our aging President, speaking in a meeting and in public admitted that “US$15 billion has disappeared from the Marange Diamond Fields” without a trace. This caused an uproar which has yet to die down, but absolutely no action has been taken and the looting continues to bleed the country. It is my own estimate that the total value of raw diamonds extracted from the alluvial deposits at Marange, now exceed US$20 billion – it is one of the largest and most valuable thefts in human history.

Corruption on this scale diminishes the capacity of any economy to meet its potential and support the population. Corruption like this exacerbates the inequalities in society, creating a society where a elite of perhaps 2,000 individuals can live lives of extreme wealth with shopping trips to Dubai and leave the vast majority in abject poverty, unable even to meet their most basic needs. Had the Marange discovery (now almost exhausted) been exploited in a responsible manner along the lines of the Botswana diamond industry, Zimbabwe could have by now repaid its foreign debt, rebuilt its aging infrastructure and begun rapid progress towards becoming a middle income State like Mauritius and Botswana.

Instead we are perhaps the third poorest State in Africa; our national debt has doubled with nothing to show for it and our once proud State institutions like the railways and the national airline are bankrupt and near collapse. Seventy per cent of our population is classified as absolutely poor and half our population is being fed by food aid agencies. We are a disaster.

The question is what can we do about this epidemic of corruption that gives the country the title that we are a kleptocratic society? For a start it has to start at the top, it is commonly stated that a fish rots from the head. In our case I am afraid this is totally true. When he came to power, Mr Mugabe had no assets to speak of, he was an austere, sober character who espoused Marxist ideologies and wanted to follow the Khmer Rouge. I heard very little reference to any corruption during his time as prime minister up to 1987.

However today, he allows his ministers and others of influence and power to freely act in a corrupt manner because it give him a hold over them and can be used as a threat should they step out of line. It has become a form of patronage, a bit like the policy that allowed English pirates to keep the loot from ships of the Spanish and Portuguese if they captured them at sea. A sort of self financing revolution! People take maize from the GMB under the “Grain Loan Scheme” and simply never pay back. Now farmers feed on the “Command Agriculture Scheme” which this year could cost us $500 million with little or no recoveries.

The evidence of corruption on a massive and pervasive scale is everywhere – estates of homes that would look good on a Hollywood Boulevard. Ministers, earning a few thousand dollars a month, accumulating tens of millions of dollars of property, luxury cars with wives and girl friends swimming in luxuries of every kind. Even Mr Mugabe, who earns a very modest salary, has luxury homes in Harare, Zvimba, South Africa, Dubai, Singapore, Hong Kong and Malaysia. The Head of a Medical Aid Society that provides medical cover to the Civil Service; steals US$35 million in three years, is fired and no further action is taken.

We pay an average of $1,30 for a litre of fuel here, in South Africa it is an average of 80 cents, Zambia perhaps 85 or 90 cents, why? I have said it has to be corruption and the figures suggest that someone is taking about $500 million a year off the top of our fuel system and that this is being banked in Singapore. The only person I know who goes to Singapore every month is Mr. Mugabe. When I mentioned this in Parliament a few weeks ago I was again met with silence. Until this changes and until those caught are punished and punished severely I cannot see any solution. Certainly our much vaunted “Anti Corruption Commission” has had zero success in the five years it has been in existence and that is the problem, not the solution.

The ex head of the State Procurement Board who was dismissed for corruption after many years at the Board, threatened to expose others. He went to his personal Office the other day, was beaten to death and thrown out the window. Whistle blowing can be expensive and such retribution is very effective as a warning! This is, truly, a mafia State.