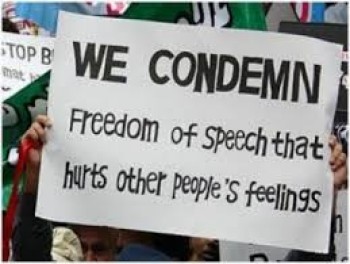 Free speech is under attack by an out-of-control government that seeks to monitor and regulate everything that moves (even sounds out of your mouth). Two of the most appalling pieces of proposed legislation to belly-flop before us are the Hate Speech bill - which makes it a criminal offence to jokingly insult a lawyer or a plumber - and the Information and Communications Technologies Policy white paper, which would create a semi-monpoly owned by the state with control over the radio frequency, says the Free Market Foundation.


The right to free, uncensored communication is the foundation of a truly democratic society. The absence of this fundamental entitlement was a hallmark of the Apartheid regime, which, inter alia, sought to control whether citizens would have the right to watch television, something taken for granted by rest of the world.  Today, there are warning signs of a return to this state-centric thinking.
The Free Market Foundation (FMF) is disturbed by two prima facie unrelated policy proposals, both of which represent a return to state censorship. These are: The Information and Communication Technologies (ICT) Policy and the Hate Speech Bill.

In 2016 the DTPS (Department of Telecommunications and Postal Services) published the long delayed ICT Policy White Paper, meant to chart the path for the future of South Africa’s mobile and broadband infrastructure and management. This policy not only contains serious threats to a thriving post-Apartheid success story, but the process by which it was derived, has two fatal flaws that mean the proposal should be scrapped in its current form and sent back for re-evaluation. These are:

1) An inadequate public consultation process on the central ideas. This selective process continues in that consultation is being undertaken on implementation, but the minister forbids any discussion on the policy itself. More shades of Apartheid control.

2) No socio-economic impact assessment (SEIA) was published as required by Cabinet as part of the consultation process. (One later appeared, after consultations ended, but it is patently done in a hurry, is badly drafted, incompetent and does not meet even the basic SEIA preparation requirements.)

The key problems within the ICT white paper include the proposed introduction of a semi-state monopoly in telecommunications, the Wireless Open-Access Network (WOAN), which came as a nasty surprise to the industry and, contrary to ministerial denials, is the subject of current intense and confrontational negotiations between the network operators and the minister behind closed doors.

Government also proposes to control how ICT providers arrive at the prices for their products, and intends to change the way radio frequency spectrum is allocated so that the semi-state monopoly will eventually hog the bulk of spectrum. Spectrum is the lifeblood of the telecoms industry and critical to investment which is essential to drive the industry forward. Without it South Africa will fall behind its peers and miss out on the next generation of technological advancement. This aspect of the White Paper alone stands to destroy the sector.

Not only is excessive regulation of the infrastructure of communication cause for great alarm, the proposed government control of content of communication threatens our freedom of expression, which since 1994, is a right that all of us take for granted.

Hate Crimes Bill has the potential to destroy free speech

The Prevention and Combating of Hate Crimes and Hate Speech Bill 2016, is extremely dangerous legislation, not only because it is badly drafted but also because it has the potential to destroy freedom of expression entirely in South Africa.

The FMF submission to government on the Bill details the crucial issues with the proposed law including: Nelson Mandela said that, “No one truly knows a nation until one has been inside its jails. A nation should not be judged by how it treats its highest citizens but its lowest ones”.

‘Sunlight is the best disinfectant, meaning it is better to have offensive ideas in the open so that they can be opposed, rather than bottled up in people’s minds. This applies to the disproven bigoted and prejudicial ideas still rife in South African society. An open society is one where such ideas can and should be destroyed in public discourse not one that controls deeply offensive speech by censorship. The Hate Speech Bill will do exactly that.

Both the ICT Policy White Paper and the Hate Speech Bill represent a dangerous return to Apartheid thinking. The government seeks to control the means of communication via the ICT policy. Speech-regulating legislation, such as the Hate Speech Bill, seeks to control the content of communications and bears an eerie resemblance to the Suppression of Communism Act if not in form, then in substance. South Africa needs to be aware and on guard against this ominous trend.