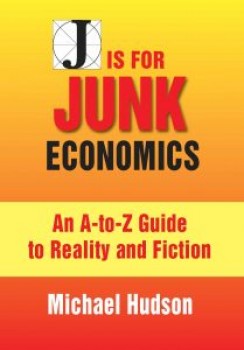 Michael Hudson is a former bank economist whose job it was to work out the balance of payments surplus of South American countries so the major banks could capture this surplus for themselves. In his new book J for Junk Economics, reviewed by Paul Craig Roberts, Hudson explains how banks have become the new "rentier class" that has displaced the feudal lords of old. They produce nothing, but capture rents in the form of interest that have no costs associated with them.

If you want to learn real economics instead of neoliberal junk economics, read Michael Hudson’s books.

What you will learn is that neoliberal economics is an apology for the rentier class and the large banks that have succeeded in financializing the economy, shifting consumer spending power from the purchase of goods and services that drive the real economy to the payment of interest and fees to banks.

His latest book is J is for Junk Economics. It is written in the form of a dictionary, but the definitions give you the precise meaning of economic terms, the history of economic concepts, and describe the transformation of economics from classical economics, where the emphasis was on taxing incomes that are not the product of the production of goods and services, to neoliberal economics, which rests on the taxation of labor and production.

This is an important difference that is not easy to understand. Classical economists defined “unearned income” as “economic rent.” This is not the rent that you pay for your apartment. Economic rent is an income stream that has no counterpart in cost incurred by the receipient of the income stream.

For example, when a public authority, say the city of Alexandria, Virginia, decides to connect Alexandria with Washington, D.C., and with itself, with a subway paid for with public money, the owners of property along the subway line experience a rise in property values. They owe their increased wealth and their increased incomes from the rental values of their properties to the expenditure of taxpayer dollars. If these gains were taxed away, the subway line could have been financed without taxpayers’ money.

It is these gains in value produced by the subway, or by a taxpayer-financed road across property, or by having beachfront property instead of property off the beach, or by having property on the sunny side of the street in a business area that are “economic rents.” Monopoly profits due to a unique positioning are also economic rents.

The inability of neoliberal economics to differentiate income streams that are economic rents with no cost of production from produced output makes the National Income and Product Accounts, the main source of data on economic activity in the US, extremely misleading. The economy can be said to be growing because public debt-financed investment projects raise the rents along subway lines.

“Free market” economists today are different from the classical free market economists. Classical economists, such as Adam Smith, understood a free market to be one in which taxation freed the economy from untaxed economic rents. In neoliberal economics, Hudson explains, “free market” means freedom for rent extraction free of government taxation and regulation. This is a huge difference.

Consequently, today the US economy is focused by policymakers including the Federal Reserve on maximizing rentier income at the expense of the growth in the real economy. Rentier income has the productive economy in a death grip. The economy cannot grow, because consumer income is siphoned off into payment of interest and fees to banks, and is not available for increased purchases of real goods and services.

Independently I arrived at Hudson’s conclusion that neoliberal economics is a device for ripping off workers and producers in order to convey awards to the rentier class. Neoliberal economics is a predatory device that justifies the exorbitant incomes of the One Percent while blaming rising debt on those forced into debt-peonage in order to survive. Hudson’s virtue is that he explains the historical development of debt-peonage and makes it clear that this is the status that the One Percent intends for the 99 Percent. He resurrects classical economics and reformulates economic theory in keeping with the facts on the ground instead of rentier interests.

Hudson is a coauthor of mine. In former times it would have been inappropriate for me to review the work of a colleague. However, the neoliberal apologists for the One Percent are not going to confront themselves with Hudson’s facts. As I do not think that my integrity or Hudson’s is in question, I have no qualms about introducing you to this major work.

Buy the book. Read and study the book. Learn to rise far above corrupt neoliberal economics.