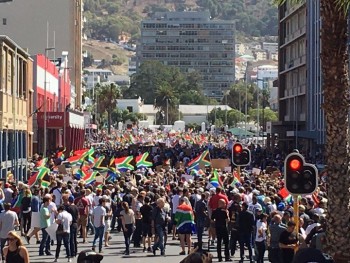 Tens of thousands of South Africans took to the streets in major cities across the country last week, calling for President Zuma's removal. This follows Zuma's dismissal of finance minister Pravin Gordhan as part of a cabinet reshuffle that resulted in SA's credit being downgraded the junk by credit ratings agencies, reports Business Day.


Tens of thousands of people across SA protested against President Jacob Zuma on Friday.

One protest that took place outside the Gupta family compound in Saxonwold‚ Johannesburg‚ degenerated into fisticuffs when Black First Land First members arrived.

Initially‚ the “Black Friday” and Black First Land First protesters sang at each other‚ with the latter planning to disrupt the demonstration. But the anti-Zuma protesters refused to be cowed and the situation became tense.

Those who had been gathering in groups from noon‚ carrying placards calling for Zuma to go‚ refused to leave.

Black First Land First protesters said they would defend the Gupta family‚ despite the presence of no fewer than five police vehicles that had been monitoring the otherwise peaceful demonstration.

Violence broke out in the Johannesburg CBD, where police fired rubber bullets and tear gas at some ANC protesters, injuring a man and a woman, a Reuters witness said.

Police were trying to prevent the ANC supporters from breaching a cordon separating them from backers of the opposition DA.

The DA, which had called for the marches, held a rally of more than 10,000 people a few streets away that was calm.

Zuma’s sacking of Pravin Gordhan in the reshuffle last Thursday has outraged allies and opponents alike, undermined his authority and caused rifts in the governing party.

Rating agencies Fitch Rating and S&P Global Ratings both cited Gordhan’s dismissal as finance minister as a reason for their downgrade of SA's sovereign credit rating to "junk" this week.

Syriana Maesela, 65, a retiree, was on her way by train to Pretoria to join the march to the Union Buildings, carrying a South African flag.

"I am marching to get the ANC to take us seriously and respect our wishes by letting the president go," she said. "We are unhappy about his leadership because he does not seem to care about the people.

"The irony is I did the same thing in 1976 when I was a student. I also marched then," she said, referring protests against the apartheid regime.

A shaken Nomusa Phungula said she was crossing live when the group accosted her on Friday‚ calling her names before pouring water over her.

Close to tears‚ she repeatedly asked: “Why are they pouring water on me?” as other journalists tried to console her.

“They were arrogant and they said what is it that I would do when I asked why they were attacking me‚” she said.

The EFF has previously made clear its hostile attitude towards ANN7 reporters and has sworn never to grant them interviews‚ labelling the reporters Gupta agents.

The incessant blare of "vuvuzela" trumpets stirred the 5,000-strong crowds. Hundreds of motorbikes, many waving South Africa’s flag, roared past the crowd, who cheered them on.

Motorists and passengers pumped their fists in the air.

Zuma has welcomed one of the marches, by Save SA, that was planned for outside the Union Buildings in Pretoria, saying it was the civil society group’s legal right to do so.

Save SA is made up of civil society groups, business leaders and prominent individuals.

Zuma, 74, has faced protests in the past. The ANC on Wednesday rejected calls for Zuma to quit, and analysts doubted marches would shake the president.

The ANC said its members in Parliament would vote to defeat a motion of no confidence against Zuma on April 18, a key rallying call for the marchers on Friday.

Some clad in the yellow, green and gold colours of the ANC also danced, waving placards emblazoned with the words: "I’m prepared to die for my ANC" and "Hands off our President".

"They are free to march freely but not to try and remove a government that was elected democratically," said Kebby Maphatsoe, the head of the veterans group and also Deputy Minister of Defence and Military Veterans.

"Let them wait for 2019 and we will take them on, but the ones that want to remove it undemocratically, MKMVA will rise up to the occasion." The rand was steady against the dollar on Friday.

The currency has tumbled more than 11% since March 27, when Zuma ordered Gordhan to return home from overseas talks with investors, days before firing him.

"Mounting opposition to President Jacob Zuma has sparked speculation that he could be forced from office," Capital Economics Africa economist John Ashbourne said in a note. "We think that the most likely outcome is still that Mr. Zuma will decide the timing of his own exit."

Mmusi Maimane, leader of the DA, led a crowd of about 10,000 people on a 1km march in downtown Johannesburg. Thousands of marchers wearing blue DA T-shirts gathered, many bussed in from elsewhere. Some held placards saying "Fire Zuma".

"Our country is in crisis," he told a crowd of supporters.

"The time to act is now." In Cape Town, motorists hooted in support of the march holding up South African flags as about 10,000 people gathered.

"The power of people is stronger than the people in power," a placard held up by one protester said. Many wore the green T-shirts of Save SA.

"It’s not simply a question of his removal. It is about the renewal of the ANC and democracy," said Gerrald Ray, 56, a business strategist.

About 4,000 people were also marching in coastal city of Durban, the main city in the KwaZulu Natal province, an ANC stronghold. Some gathered on the city’s northern beach; others rallied in the city centre.

"We need to unite and fight this corruption," said Michelle Fortune, 48, a manager who declined to say where she works. She wore a South African flag bandana.

Members of the influential ANC Youth League gathered in downtown Durban, singing "Awuleth’umshini wami", a song popularised by Zuma, which means "bring me my gun" and held placards supporting the president.