King Shaka International - an airport in desperate search of passengers 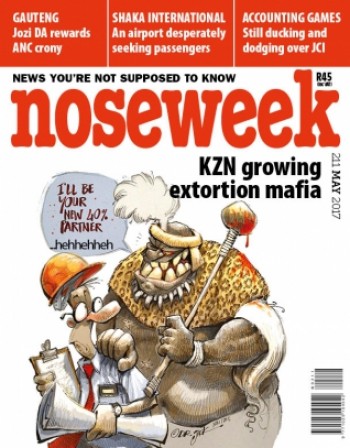 Durban's King Shaka International is an airport in desperate search of passengers. Like most public sector projects of the last 10 years in SA, it ended up costing between two and three times the original budget estimates. But this one was a corker: it was foisted on Airports Company of SA (ACSA) by then minister of transport, Jeff Radebe, and has lumbered the organisation with crippling debt since then. This crass decision explains some of the other bizarre goings-on at ACSA in recent months. Minority shareholders in ACSA - who have been trying to sell their shares back to government (without success) at something approaching fair value - say the company has abandoned its commercial mandate and now operates as a development arm of government. This article first appeared in Noseweek.


First costed at R3.15 billion, by the time Durban’s King Shaka International Airport was completed in 2010, it had cost anything between R7.6bn and R9bn. This kind of cost overrun is chicken feed when stacked against Eskom’s Medupi and Kusile power stations, but it set in motion a chain of events that helps explain some of the bizarre decisions coming out of Airports Company of SA (ACSA). King Shaka is one of the nine airports managed by ACSA. In February, Minister of Transport Dipuo Peters fired half the board of ACSA, ostensibly to strengthen it, but left in place CEO Bongani Maseko who was fingered last year in a forensic report that detailed several instances of procurement irregularities.

This is just one instance of political interference in the running of ACSA. A far graver interference was the decision in 2006 to force ACSA to build the King Shaka International Airport without a feasibility study having been carried out and in defiance of all commercial logic. This decision lumbered ACSA with crippling debt which it has been forced to service ever since.

In March this year, minority BEE shareholders in ACSA brought an application before the High Court in Pretoria challenging the “commercially illogical” decision by the airports regulator to lower tariffs by 35.5%, which would cut revenue by R1.8 billion by 2018 and remove all prospect of the company’s being able to declare a dividend to shareholders.

The tariffs went into effect on 1 April, but the matter has now been placed under judicial review. These tariffs benefit airline operators and passengers, but not ACSA shareholders, who long ago gave up hoping for a decent return on their investment.

Just a few years ago, in 2011, when ACSA had completed a massive airport upgrade programme, it was granted a staggering 133% increase in tariffs by the regulator. Why would ACSA now apply for a reduction in tariffs? None of this makes much sense unless, as minority shareholders have argued, one understands that ACSA has abandoned its commercial mandate due to political meddling. Minorities want nothing more than to sell their shares back to the state and have been trying for years to do so at something approaching fair value. Instead they have been offered 40% of net asset value.

The only buyer for these shares is the government which, nearly 20 years ago, lured investors into ACSA with promises of privatisation and an eventual listing on the stock exchange. Based on these promises, it got Aeroporti di Roma (ADR) to purchase 20% of the company for about R890m in 1998, or R8.19 a share. This valued ACSA at about R4bn at the time. When it became clear the government had no intention of listing ACSA, ADR sold its shares to the Public Investment Corporation (PIC) for R16.75 a share, making a decent return on its investment. No such luck for the minorities, who have now turned to the courts for relief.

ACSA is 74.6% owned by the state, 20% by the Public Investment Corporation, 1.2% by staff and 4.2% by five empowerment companies. It is the empowerment companies that are peeved at the direction the company has taken. They paid R172m for their shares in 1998, almost all of it borrowed. By 2006 they had received dividend income of R109m, which is less than a third of the R350m cost of borrowings they incurred to take up their shares.

A 2012 report by auditors Ernst & Young suggested the financiers who backed the empowerment shareholders were keen to foreclose on the underlying ACSA shares, but that this would have a negative effect on perceptions of ACSA and the empowerment deal.

If minority shareholders are disgusted with the crumbs they have been tossed by ACSA, why would the PIC be inspired to purchase ADR’s 20% shareholding, unless it is subject to the same political interference as ACSA?

To sweeten the deal for the PIC, ACSA paid out a special dividend of R1.79 a share shortly after PIC acquired its shareholding in the company. The PIC invests public sector funds “based on investment mandates set by each of these clients and approved by the Financial Services Board (FSB),” according to its website. “Our goal is to not only meet, but exceed our clients’ expectations and our shareholders’ investment objectives through thorough research, careful risk analysis and stringent compliance practices.” How’s that for a laugh!

Many of ACSA’s difficulties can be traced back to 2006, when then-Minister of Transport Jeff Radebe decided that Durban needed a new airport and announced plans to go ahead with the building of the King Shaka International Airport (KSIA) at La Mercy in Durban. This was to be followed by the decommissioning of the pre-existing Durban International Airport.

Back in 2006, with the 2010 World Cup looming, ACSA embarked on a massive upgrade of its airport infrastructure. Radebe did not consult ACSA about the government’s decision to build KSIA – which is odd since ACSA would be responsible for running the airport and therefore lumbered with the cost, which we now know nearly trebled from the original estimates. The consequences of that decision have suffocated ACSA’s financial viability and effectively forced it to abandon the commercial mandate it is required by law to uphold. To all intents and purposes, ACSA no longer operates as a company but as a developmental arm of the government, determined to advance the ambitions of the modern Zulu empire.

In 2006, ACSA had interest-bearing borrowings of R118m, equivalent to 5.4% of revenue. Today, borrowings exceed R10bn, more than 117% of revenue. Most of this increase in borrowings relates to the construction of KSIA. In 2013 the Presidential Review Committee of State-Owned Enterprises likewise challenged the logic of building the airport: “It was clear that the commercial viability of ACSA was negatively affected by the pursuit of a national interest. ACSA carried the lion’s share of the funding that was required, and the regulator forced ACSA to rely on borrowed funds.”

The contract to build the new airport and the first phase of the Dube Tradeport, north of Durban, was won by the Ilembe Consortium, headed by Group Five and WBHO Construction. Both companies featured prominently in the Competition Commission’s investigation into bid-rigging and collusive tendering in the construction industry.

ACSA was not in principle opposed to the construction of the new airport but did not consider it necessary or even viable before 2017 to 2020, which is when traffic through Durban International Airport is expected to reach five million passengers a year. Traffic volumes have yet to hit that level and are unlikely to do so for several years. Even at these traffic volumes, the new airport would only have been viable at what turned out to be unreasonably optimistic project cost estimates.

ACSA came under heavy pressure from across the political spectrum to construct KSIA prematurely. However, as late as March 2010 its economic value was still being questioned by the CEO of the Board of Airline Representatives of South Africa, Alan Moore: “There is nothing at this airport that would have warranted the spend on the facility... The new facility was built with little or no consideration of the general aviation community and a number of operators in the Durban sector are under threat.”

International Air Transport Association (IATA’s) Director for Industry Charges: Fuel and Taxation, Jeff Poole, stated at the time: “Quite simply, the extravagance that is King Shaka International Airport cannot be justified. There is no sustainable business case underpinning its rushed development. Local and international airlines agree the airport is premature, with insufficient traffic or demand to support it. Airlines support the user-pays principle and are willing to pay for use of facilities that add value, deliver efficiencies and provide a value-for-money service. But why should they pay for construction of an airport that is not needed and that most airlines do not even plan to use? As in any other industry, surely ACSA’s shareholders, who earned handsome dividends for several years, should recapitalise the company so it can fund its own capex programmes?” said Poole.

The then-Director-General of Transport George Mahlalela defended the decision to build KSIA and criticised the former CEO of ACSA for being critical of the proposal to construct it earlier than deemed necessary. ACSA thus embarked on its capex programme without an equity injection, relying instead on a massive escalation in debt imposed on it by the government and the regulator. In 2015 ACSA’s board approved capital expenditure of R52.4bn over the 10 years to 2025, despite not having the capital and that its airports were operating at only 63%-68% of design capacity and forecast returns would be insufficient to fund borrowings of R52.4bn.

“ACSA is allowed to give notice to the regulator that it intends to close an airport if it is not commercially viable, but to my knowledge ACSA has not done so in respect of KSIA. Were it to do so the regulator is required to make recommendations to the Minister of Transport and the minister may compensate ACSA for the continued operation until it becomes commercially viable. To my knowledge ACSA has not sought compensation from the government for the uneconomic KSIA,” says Alun Frost, investment manager at African Harvest, one of the minority shareholders.

What’s happening at ACSA is happening across the public sector. Private investors are deserting the bond auctions held by state-owned companies, leaving it to the PIC – the government’s current go-to source of victim capital – to pick up what is now officially junk credit, thereby further imperilling the pensions of public servants. The message is clear: next time a government minister comes up with a grand investment scheme, run for the hills.