ANC allies turn on Zuma - call for his resignation 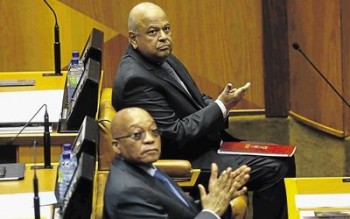 The SA Communist Party, trade union federation Cosatu and leading ANC figures have called for President Zuma to resign following his firing of Pravin Gordhan as finance minister last week, according to Business Day. This comes as S&P announced a credit-rating downgrade that left SA on junk status with a negative outlook. Zuma removed Gordhan using a bogus intelligence report to justify the move to ANC officials. He is now appealing to provincial ANC leaders to buttress his support, but the tide has turned against the president, who appears to have grossly misread the public outrage triggered by last week's cabinet reshuffle.


ANC ally, the Congress of South African Trade Unions (Cosatu), has called on President Jacob Zuma to step down. “Cosatu no longer believes that the president is the right person to lead the country and the movement ... the time has arrived for him to step down,” said Cosatu general-secretary, Bheki Ntshalintshali. “Cosatu no longer believes in his leadership abilities.”

Ntshalintshali was briefing the media in Braamfontein after a special sitting of Cosatu’s central executive committee on Monday. The federation has blamed Zuma for the country’s downgrade by S&P Global Ratings on Monday.

Cosatu discussed last week’s Cabinet reshuffle and used three guiding questions to assess its decision: whether the reshuffle was in the best interests of the ANC and the country; if it takes the fight against corruption forward; and if it was based on merit.

Ntshalintshali said Cosatu’s answer to each of these was “No”.

The influence of the Gupta family on Zuma and the Constitutional Court judgment on Nkandla all informed the federation’s stance against Zuma. It also admitted that the Cabinet reshuffle was the first during Zuma’s presidency about which he did not consult the federation.

Zuma has also failed to deal with incompetent ministers in his Cabinet, Cosatu noted, which also rejected Zuma’s argument that it was his prerogative to choose his Cabinet. “Voters gave the ANC a mandate ... the president derives his mandate from the ANC,” said Ntshalintshali.

Cosatu president, Sdumo Dlamini, said the decision was not taken lightly and follows lengthy consultation with the ANC on the Zuma matter. Business Day reported last year that Cosatu had decided it was time for Zuma to go after the local government elections in which the ANC dropped in support.

Cosatu decided back then, however, to first consult the ANC and deliver the message directly to the party leadership instead of publicly. “We cannot contain this any more,” said Dlamini. “We need serious action to deal with this matter... for us, the call we are making is a very important one.”