How the black market is saving two countries from their governments

In desperate times, it is the black marekt that saves countries from their incompetent and rapacious governments. Two examples are examined in this article from TheAntimedia.org: Venezuela and Greece. To which we might add Zimbabwe and, increasingly, South Africa, where the shadow economy is reported to account for 25% of GDP. Governments traduce black marketeers as tax cheats and call them other horrible names, when they should be celebrated for pursuing the purest form of free enterprise.

Ever since governments began banning and licensing different parts of the economy, the black market has made sure people still have access to the things they need. Unstable governments always turn on their own citizens by using price controls, heavy taxes, and even the threat of imprisonment to prop up their failing systems. As conditions inevitably deteriorate, as they have in Venezuela and Greece, the underground economy becomes invaluable to those living through the crisis.

The shadow economy refers to more than just the trade of illegal goods. A grey market, for example, provides legal products that have become difficult to find. Since basic things like toilet paper, medicine, and even food have disappeared from store shelves in Venezuela, the peer-to-peer network has become the only reliable way to secure life’s necessities. In desperate situations like this, the existence of independent merchants can mean the difference between life and death.

Even the value of Venezuela’s currency has started to move away from the government’s control.  At one point, the official exchange rate was fraudulently set at 10 bolivars per U.S. dollar, while on the black market it was trading at 1,000 to one. This action hurt millions by suppressing wages across the country and eroding any remaining trust. Inflation has quickly become the most imminent threat to the Venezuelan people, stealing the value of their labor and savings. For years, the bolivar has experienced hyperinflation, increasing the cost of living almost exponentially.

The State’s desperate response was to institute price controls, but that has only led to shortages across the board. Luckily, the unregulated markets have been able to determine the true value of goods and provide vital support for the struggling communities. Many people think that so-called price gouging is unethical, but isn’t it better to buy what you need at twice the price than to not be able to get it at all?

The epidemic of tax evasion in Greece 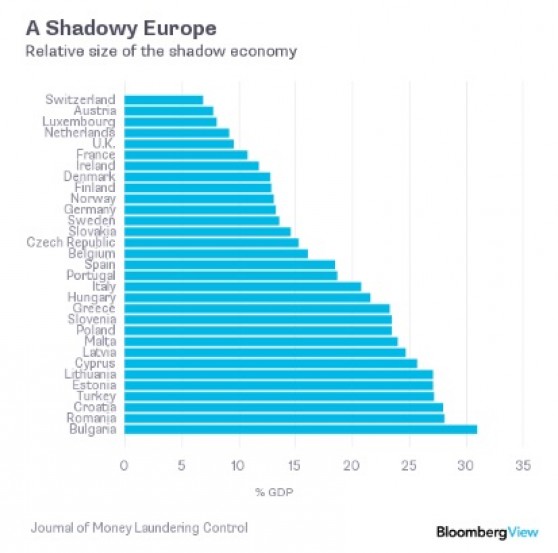 Greece is going through a transformation of its own — but in response to a very different set of circumstances. The Greek people have endured a series of tax increases and pension cuts over the past several years to fund debts owed to the European Union. These austerity measures have created a dire situation for those trying to secure their financial independence. The result has been widespread tax evasion, which has helped grow Greece’s underground economy to nearly 25% of the country’s GDP.

Surprisingly, it’s not only the poor who are utilizing the shadow economy in Greece, but also the professional class. Those earning large amounts of money are subjected to extremely high tax rates, driving many business owners and entrepreneurs to either seek better opportunities abroad or take steps to conceal their income.

By persecuting the most successful members of society and not allowing them to keep what they earn, authorities are only encouraging disregard for the law. Without the grey market in Greece, many more skilled workers would have already left the country. Even though the black market is consistently blamed for taking away tax revenues, it ironically may be the only thing keeping the debt crisis from spiraling even further out of control.

Scarcity is more than just a mindset; it’s a harsh reality that people born in developed nations rarely see firsthand. But any time a bankrupt government seizes control over their citizens’ lives and the economy, the end result is always despotism. The consolidation of power into the hands of a few is rationalized during chaotic times but ultimately puts the rights of all citizens at risk.

Just last year, Venezuelan law enforcement carried out raids that killed 245 people. There was no accountability regarding whether the shootings were justified, but reports claim that many of the victims posed no threat and some were even killed after being taken into custody. Such violent crackdowns are the inevitable result of governments attempting to maintain control amid the chaos of broken economic systems.

In 2011, Robert Neuwirth wrote a report for Foreign Policy that highlighted the importance of this untaxed, unlicensed, and unregulated global marketplace. He called it “System D.”

“They say that inventive, self-starting, entrepreneurial merchants who are doing business on their own, without registering or being regulated by the bureaucracy and, for the most part, without paying taxes are part of ‘l’economie de la débrouillardise.’ or, for street use, ‘Systeme D.’ This essentially translates as the ingenuity economy, the economy of improvisation and self-reliance, the do-it-yourself, or DIY, economy.”

The nanny state has done an excellent job attacking anything outside of the government’s jurisdiction, but a lack of regulation is what allows for the most rapid growth and productivity. Legislators notoriously overestimate their influence on the millions of people they attempt to rule over, but ultimately, grassroots decisions made by individuals have the greatest impact. People who rely on their own skills and reputation rather than a bureaucratic stamp of approval are labeled criminals, but they’re the ones providing real value to society in many cases.

Merchants in these off-grid markets are often associated with danger and violence, but in reality, they provide the purest form of voluntary transactions. Negative aspects, like organized crime, are only made possible because of the profits created as a result of prohibition. Without the State intimidating the public at gunpoint, there would be no incentive for people to seek out the services of nefarious organizations.

These organic free markets are only strengthened with the circulation of assets like cash, bitcoin, and precious metals. Anonymity mixed with technology is empowering people in ways never imagined. The adoption of cryptocurrencies is bringing the shadow economy into the digital age and expanding its reach internationally. This new economic system represents a very real threat to the current financial and political structures.

However, innovators in this environment have to be careful, and after the Silk Road was taken down, real legal implications became apparent. Most famously, Silk Road co-founder Ross Ulbricht was sentenced to life in prison and targeted specifically for challenging the existing system.

The growing progression towards decentralization he attempted to catalyze is on a direct collision course with the central banks and their war on cash.  As the public’s faith in fiat money continues to wane, there will be more and more opportunities to show the benefits that come from peer-to-peer networks over central planning. Those who recognize the inherent extortion of the old system have to lead by example and educate others, regardless of which tactics of intimidation are deployed against them.

This article originally appeared at TheAntimedia.org.