Dudu Myeni's time at SAA may be up 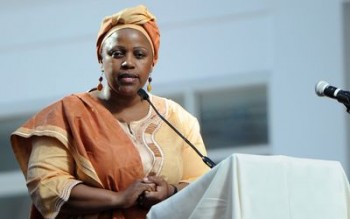 Monyweb reports that SAA chairperson Dudu Myeni's time may be up. Earlier this week the SAA Pilots Association and Organisation Undoing Tax Abuse filed a case against her in the South Gauteng High Court to have her declared a delinquent director over several financial irregularities and allegedly incompetent dealings.

History was made this week when the SAA Pilots Association (SAAPA) and Organisation Undoing Tax Abuse (Outa) brought an action to have SAA chairperson Dudu Myeni declared a delinquent director.

As far as is known, this is the first time legal action of this nature has been brought against a director of a state-owned company. Dudu Myeni’s time at SAA may soon be up.

Last year finance minister Pravin Gordhan demanded a reshuffle of the SAA board as a precondition for extending a R15 billion guarantee to the technically bankrupt airline, but mysteriously left Dudu Myeni untouched. Her tenure as chairperson at SAA is up for review in September this year, so she may have vacated the chair by the time the legal case is argued in court. But SAAPA and Outa say they will pursue legal action against her regardless.

Should SAAPA and Outa win their case, Myeni will be barred from holding an executive or director position in any South African organisation for at least seven years. That would mean she would have to resign as chair of the Jacob Zuma Foundation and the SA Association for Water Utilities. In December last year the Kwazulu-Natal High Court ordered her to step down as chair of the Mhlathuze Water Authority for unlawfully extending the board’s tenure by six months.

We now know from Outa’s revelations surrounding SAA and the court case brought by Mhlathuze Water Authority’s suspended CEO, Sibusiso Makhanya, that Myeni has a habit of purging management and board members who get in her way. She’s done the same at SAA. The airline has had more than half a dozen CEOs in as many years, including Vuyisile Kona and Nico Bezuidenhout, virtually all of them departing in acrimonious circumstances. Meanwhile, the losses continued to mount. 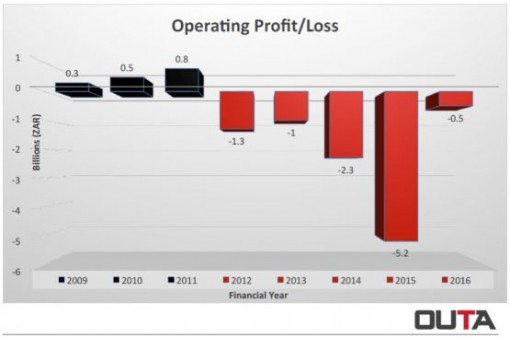 The latest court case is likely to be a drawn out bare knuckle fight to the death. Myeni will argue – as she has done already – that reactionary forces within the airline are opposed to transformation, of which she is the champion. It’s always someone else’s fault. She went so far as to publicly attack her own pilots as spendthrifts living high on the hog in foreign destinations.

SAAPA chairperson Captain Jimmy Conroy, addressed this at a press conference on Wednesday. A typical crew comprises 13 to 15 members, three of which are pilots. Both cabin crew and pilots stay in the same hotels in 22 of the 24 destinations they service. The idea that pilots are running up massive expenses abroad is clearly nonsense, he added. South African pilots are well paid, he says, but in terms of international benchmarking studies, “we are paid less than many of our peers”.

Those in the airline industry were astonished Myeni survived Gordhan’s purge of SAA directors. That, they argue, is testament to the power of the patronage she enjoys under President Jacob Zuma. After all, she is chair of his foundation. She joined the SAA board in 2009 and became its chair in September 2012, replacing Cheryl Carolus, who had done sterling work in returning the airline to profitability. That same day, seven SAA board members resigned in protest at the rise of a political appointee with no experience of running an airline. As former SAA board member (and former head of the JSE) Russell Loubser pointed out at the time, if she had any executive talent, she kept it well hidden.

Myeni’s reign at the airline had begun, and it didn’t take long to wipe out the fragile profits accumulated under the previous administration. The losses under her reign since 2012 exceed R10 billion.

More than that, she has seen off two finance ministers, two ministers of public enterprises, and several dozen executives and directors during her time at SAA. That says something about the power she enjoys in political circles. When she is upbraided by Treasury, it is the finance minister who is fired. Anyone but Myeni.

Former SAA staff and currently serving pilots are dumb-founded that she is still around despite the accusations of financial irregularities, the unchecked losses and the purging of several competent executives, leaving the airline bereft of talent in several key portfolios. She suspended former CEO Monwabisi Kalawe on charges of misconduct and wasteful expenditure over the objections of then public enterprises minister Malusi Gigaba, who was promptly moved by President Zuma to home affairs. Lynn Brown replaced Gigaba as public enterprises minister. She didn’t last long either. The new minister was reportedly unhappy with Myeni’s performance and wanted her removed. Zuma had SAA removed from Brown’s purview.

Former finance minister Nhlanhla Nene came off second best in his slugging match with Myeni over the refinancing of the airline’s Airbus fleet in 2015. This, it is widely suspected, was the reason for his dismissal as finance minister in 2015 and his replacement by Des van Rooyen, before common sense prevailed and Gordhan was returned to the post. The rout of the rand in the weeks following the three ministers in a week fiasco imposed a cost of billions on the economy.

The court action by Outa and SAAPA references the appointment of BnP Capital in May 2016 as a transaction advisor to SAA, “despite expert advice by the Group Treasurer that this service was not required”. This relatively small contract was subsequently extended to cover the sourcing of the R15 billion SAA needed to refinance its balance sheet and stay afloat. “Not only was the appointment process flawed from the outset, the Board either failed to perform due diligence on this little known company, or simply ignored the fact that BnP Capital did not have a valid Financial Service Provider (FSP) Licence, which was required in order for it to provide these services to SAA,” says Outa’s statement. “The planned contract was terminated only after Outa brought the irregularities of the contract to light and threatened legal action against those responsible.”

Once the contract was terminated, BnP Capital demanded a R49.9 million cancellation fee. The board objected. Only Myeni approved it.

In another instance of alleged delinquency cited by Outa, in 2015 she blocked a strategic partnership deal with Emirates Airlines that would have benefitted SAA to the tune of R2 billion while expanding its international reach. She is also alleged to have caused financial and reputational loss to the airline by delaying an Airbus swap transaction with Airbus. This transaction envisaged swapping the purchase of ten A320 aircraft for a lease of five A330-300 aircraft from Airbus.