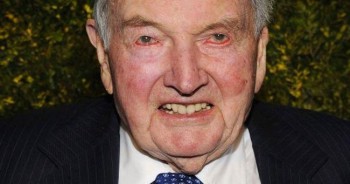 David Rockefeller Sr passed away earlier this month at the age of 101. In death, as in life, he remains the scourge of conspiracy theories the world over. He presided over the shadowy Council for Foreign Relations for decades and is widely assumed to be a key architect in the "deep state" government that survived more than a dozen US presidents since World War 2. Reading the obituaries from the mainstream press, it is hard to imagine a more noble and dedicated servant of the people. So who was this man, and what did he really stand for? As Kalee Brown discovers, he was all for central banking, one world government and population control. He was about rigging the system to suit himself and his family. He loved foreign conflicts and anything that would turn a buck.


With the passing of David Rockefeller, I started to reflect on his views of the world. Time and time again he pushed for a New World Order and a one world government, which would allow the elite and world bankers to hold complete control over the global population. This got me thinking: Do people even understand the gravity of the situation at hand, or what a one world government would mean?

Throughout history, numerous politicians and members of the elite have spoken out about their support for a one world government or a New World Order, and the shadow government that’s pushing for it, but what do all of these terms mean?

The New World Order is the supposed goal of a handful of global elitists who are pushing for a one world government and a heightened national security state. This group often referred to as the cabal, has been using foreign threats to heighten security, strip us of our rights, and invade other countries. The entire world is practically covered with U.S. military bases, with the exception of Russia and a few other countries.

Those pushing for the New World Order are the same members of the elite class who control the U.S. government, otherwise referred to as the “shadow government.” Numerous politicians have publicly discussed the people who secretly control the U.S. political system, creating laws and bending them.

The real menace of our Republic is the invisible government, which like a giant octopus sprawls its slimy legs over our cities, states and nation . . .  The little coterie of powerful international bankers virtually run the United States government for their own selfish purposes. They practically control both parties . . .  [and] control the majority of the newspapers and magazines in this country. They use the columns of these papers to club into submission or drive out of office public officials who refuse to do the bidding of the powerful corrupt cliques which compose the invisible government. It operates under cover of a self-created screen [and] seizes our executive officers, legislative bodies, schools, courts, newspapers and every agency created for the public protection. (source)(source)

Senator Daniel K. Inouye, a high-ranking Asian-American politician, has also stated: “There exists a shadowy government with its own Air Force, its own Navy, its own fundraising mechanism, and the ability to pursue its own ideas of the national interest, free from all checks and balances, and free from the law itself.” (source)

Canadian economist Dr. Michel Chossudovsky, who is the University of Ottawa’s Emeritus Professor of Economics, also gave a great speech at the International Conference on the New World Order. You can check that out and read more about it here. Who is this group of elites? Well, Dr. Chossudovsky believes it originates with those who control the U.S., Israel, and other allies, but who is controlling these countries and this massive global agenda?

The shadow government includes billionaire families like the Rockefellers and the Rothschilds, members of the financial elite like George Soros, and large corporations and big banks.

The shadow government can manipulate, or in some cases, create legislation through either close ties to politicians or even organizations like the American Legislative Exchange Council (ALEC).

ALEC is a conservative group comprised of state legislators and corporate leaders that allows corporations to help write, or in some cases, just hand over legislation that the “official lawmakers” can then take credit for and formally propose. ALEC has been responsible for numerous immoral bills including those that aim to lower minimum wage, suppress voter rights, pro-gun laws, ag-gag (animal cruelty) bills, and more.

It’s clear that corporations have a strong hold on government regulations; why else would chemicals be put in our food and the environment? Even the U.S. Environmental Protection Agency has strong ties to oil companies, despite the fact that they’re supposedly the government agency that protects the environment (learn more here). Some have even speculated that the Trans-Pacific Partnership was designed to enable a one world economy.

Other countries are publicly recognizing the role the elite plays in the U.S. government. For example, after Bill Clinton accused Poland and Hungary of turning into a “Putin-like” and “authoritarian dictatorship” last year, their governments saw right through it.

Hungarian Prime Minister Viktor Orbán responded by saying, “The remarks made about Hungary and Poland … have a political dimension. These are not accidental slips of the tongue. And these slips or remarks have been multiplying since we are living in the era of the migrant crisis. And we all know that behind the leaders of the Democratic Party, we have to see George Soros.”

He went on to say that “the mouth is Clinton’s but the voice is of George Soros.”

In order to successfully create a New World Order, some of the tactics this group uses are false flag terrorism and the fear of global threats, which enable them to increase security measures on domestic populations (like Bill C-51) and thereby justify the invasion of other countries (like Iraq and 9/11, for example). You can read more about that in our CE article here.

The transcript from a 1991 Bilderberg group meeting in Baden, Germany, was released, proving how deluded Rockefeller’s views truly were. Bill Clinton also attended this meeting, I’m sure along with many other members of the elite class. Rockefeller stated:

We are grateful to the Washington Post, The New York Times, Time Magazine and other publications whose directors have attended our meetings and respected their promises of discretion for almost forty years. It would have been impossible for us to develop our plan for the world if we had been subject to the bright lights of publicity during those years. But the world is now more sophisticated and prepared to march toward a world government. . . .  The supranational sovereignty of an intellectual elite and world bankers is surely preferable to the national auto-determination practiced in past centuries. (source)

This quote is extremely revealing, as it proves that not only has he been striving to create a one world government since well before 1991, but mainstream media (MSM) news outlets were aware of it and chose not to disclose this information to the public. It’s disturbing that MSM turned a blind eye to this; however, it’s not really surprising given the fact that the elite people attending these types of meetings are the very people who fund and control these corporations.

MSM exercises extreme control over the masses, expertly keeping the general population ignorant and oblivious to the events going on all over the world. If you live in the U.S., you probably have no idea what’s going on with Syria or Russia, because the elite loves to keep you in the dark and feed you propaganda and misinformation (you can read more about that in our CE article here).

Despite his wrongdoings, Rockefeller was a proud member of the elite, and he voiced this pride on numerous occasions.

In 1994, Rockefeller was quoted at a U.N. dinner as saying, “We are on the verge of a global transformation. All we need is the right major crisis, and the nations will accept the New World Order.”

Could this crisis have been 9/11, an orchestrated and planned demolition by the elite? Or perhaps he’s referring to the current events in Syria? Either way, it’s no secret that the elite use false flag terrorism to manipulate the masses.

David Rockefeller wrote in his 2002 memoirs: “Some even believe we are part of a secret cabal working against the best interests of the United States, characterizing my family and me as ‘internationalists’ and of conspiring with others around the world to build a more integrated global political and economic structure — one world, if you will. If that’s the charge, I stand guilty, and I am proud of it.”

It’s clear that the elite are pushing for a one world government, as it serves their best interests. They would gain further control of the population and make more money in the process. However, the elite has tried to spin this like it would be a good idea for the global society, which is far from reality.

Thankfully, there are other governments that see through their lies, highlighting the corruption that takes place within the U.S. government. The danger doesn’t lie within the idea of a one world government, but rather with the people who would control it.

CE strongly advocates for oneness and breaking down separatism and division, but that is not what this type of New World Order is about. The elite have been working against our best interests for a long time, which David Rockefeller plainly admitted in his 1991 Bilderberg speech.

The type of one world government that Rockefeller proposed would allow the elite to strengthen their leash on the general population and expand their reach. So far, they’ve proven that their goals are to strip us of our money and our rights, poison us through our food and the environment, and brainwash us using MSM and entertainment. Why would we want these people controlling the entire world?

It’s important to reflect on what role you, as a citizen, play in all of this. Are you supporting the organizations that the elite govern? Are you participating in and falling victim to the very systems that keep perpetuating their control over the system? While it may be difficult to admit, this is at least in part a reflection of you, because you are part of the collective; however, the good news is that you can be part of the solution. You vote with your voice and your dollar every single day — make it count!

This article appeared in Collective Evolution.