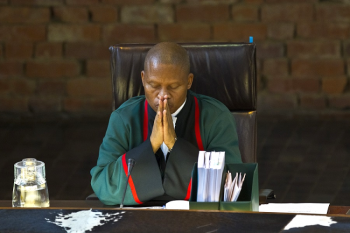 The contract allowing Cash Paymster Services to continue paying social security grants has been extended for another year, according to Business Day. Chief Justice Mogoeng Mogoeng (pictured left) had clearly lost patience with Social Development Minister Bathabile Dlamini over who exactly was going to pay out grants come 1 April.

The Constitutional Court on Friday ordered that the contract between Cash Paymaster Services and the SA Social Security Agency be extended for another 12 months.

Justice Johann Froneman, reading the judgment, said both had a constitutional obligation to carry on paying grants from April 1 until another entity other than CPS was able to do so.

He said the  invalidity of the CPS contract was suspended for 12 months.

"SASSA and CPS must ensure payment from April 1 for 12 months on the same terms and conditions as the contract which expires on March 31," he said.

The ruling is a crucial step in ensuring that a sizeable portion of SA's population receive the grants, on which they depend for their livelihoods, in two weeks' time.

Black Sash asked the Constitutional Court to supervise the payment of grants to ensure they are paid on April 1, after Social Development Minister Bathabile Dlamini failed to ensure there was a company in place to distribute grants when the contract with Cash Paymaster Services (CPS) expires at the end of the month.

She also failed to ensure the South African Social Security Agency (Sassa) would pay the grants itself, as it had promised the court in November 2015.

This left CPS as the only possible solution, and the decision facing the court was to ensure that grants continue to be paid, without condoning a contract it had previously declared to be illegal, or enabling CPS to dictate terms.

Minister on the line

In hearings on the matter, Chief Justice Mogoeng Mogoeng (pictured above) has had short shrift for Dlamini.

The minister and President Jacob Zuma have denied there was any crisis brewing.