Castro, the darling of the left, created an apartheid hell in Cuba 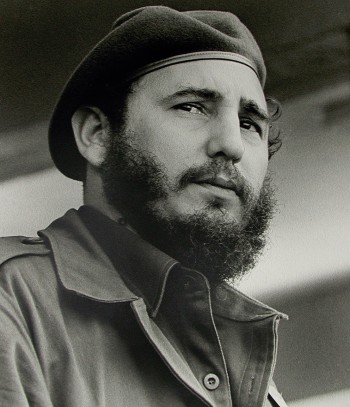 When Fidel Castro died, the mainstream media in South Africa and elsewhere were beside themselves with grief over their fallen hero. If you are not a sufferer of Castrophilia, it is obvious that there is nothing good to say about this mass murderer, except that he was lucky enough to live into his 90s within 90 miles of the US coastline, writes Yuri N. Maltsev, Professor of Economics at Carthage College in Wisconsin.


I've been to Cuba several times. Everything worth looking at was built either under the Spanish or during the time of former president Batista (including highways, bridges and big universities). The complete lack of reliable statistics makes it impossible to offer any exact numbers on the state of the Cuban economy.  I've traveled to more than 80 countries and can compare Cuba only to Malawi or Lesotho in standard of living by visual approximation.

Guatemala, with its $3,800 per capita GDP, looks like a superpower compared to the prison island. In the same manner, the proper central planning system of the economy makes it impossible (even in theory) to analyse its production in monetary value.

Wages in Cuba increased to a whopping 687 CUP/month (USD26.5) in 2015 from 584 CUP/month (USD22.03) in 2014 according to official Cuban stats. Castrophiliacs brought to the World Bank absurd numbers. According to them, Cuba’s GDP per capita was USD6,156.62 and its GDP Per Capita by Purchasing Power Parity USD19,950.28. Castrophiliacs at the CIA estimate Cuban GDP Per Capita Purchasing Power Parity at an equally absurd USD10,200.

Not much to buy

Since late 2000, Venezuela has provided petroleum products to Cuba, supplying nearly 100,000 barrels per day. Cuba has been paying for the oil with the services of forced labourers including some 30,000 medical trained slaves. 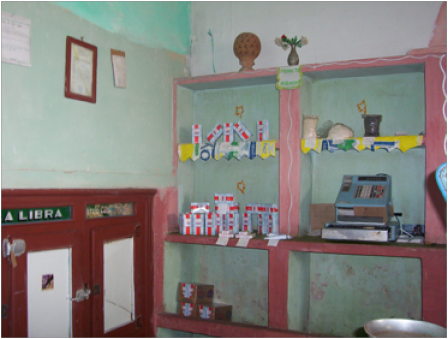 Pre-Castro, the Cuba of Afro-Cuban leader Fulgencio Batista was no paradise, but there were economic opportunities. People owned themselves.“People could get actual jobs, producing and selling goods and services people wanted to buy:  rum and sugar, cigars, tourist vacations. The system was as corrupt as Chicago, but corruption is a source of opportunity for those willing to take it. The Castro system monopolized wealth and power in the hands of a tiny minority consisting of Fidel and his flunkies. Sure, he gave them free education — or rather Marxist indoctrination — and free healthcare on par with America in the 1950’s. Of course, in a country where many people earn only USD 2 per day, the major health problems are starvation and malnutrition”[2].

Pre-Castro Cuba maintained a stable developing economy well incorporated in the international markets, second in per capita income in Latin America.  At that time, the Cuban Peso and the US Dollar shared the same values. National and international financial institutions cooperated in incrementing its lending operations to Cuban businesses and foreign investors willing to invest their capital in the Island.

Fading remnants of the past

The economic system established in Cuba by the murderous Castro brothers is nothing but a regime of public slavery where a Lockean self-ownership was replaced by government ownership of the populace.  In 1959, a meltdown was felt when Fidel Castro began a massive programme of nationalisation.  The Soviet Stalinist model of government and central planning was introduced and caused an enslavement of the populace a the radical change in the country's economy. 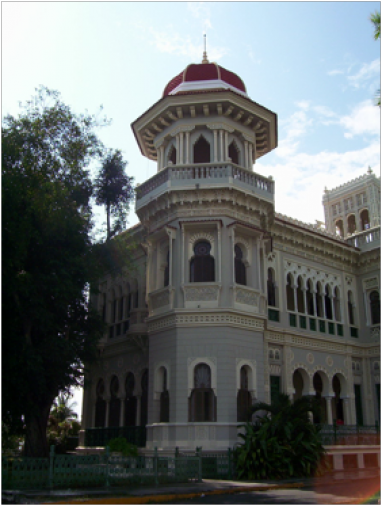 Cuban masses are not only physically separated from the elites. There is complete socio-economic apartheid between the slaves and their masters with separate monetary systems, retail facilities and health care and educational systems. Copied from ‘big brother’ USSR in the beginning of the 1960s, some comrades became more equal than others and separated themselves from the gray masses with checkpoints and fences, and different currencies and rationing cards. The masses are paid in Cuban Peso (CUP), whereas their ‘owners’, the government elite, use the Cuban Convertible Peso (CUC). The CUC is worth about 30 times the value of the CUP on the black market. Cuba’s “special stores”, access to tourist areas, restaurants, and other attractions for elites and foreigners do not accept Cuban Pesos, which effectively keeps the workers out of the “workers’ paradise” so much adored by Jesse Jackson, Michael Moore, Oliver Stone, Robert Redford and the like.

As in South Africa, at the height of apartheid, the Cuban people are banned from the beaches. The elites and foreign tourists have the white sand all to themselves reserved for them behind walls built around these beaches. The people on the other side of the wall, have nothing. My students befriended a joyful Afro-Cuban teenager with a Russian name[3] Yevgeny and invited him to the beach at our hotel. He was arrested in our presence. All my attempts to have him released from custody failed. I tried to explain at the police precinct that Yevgeny is our friend. Police thugs asked me for his surname, which, unfortunately, I did not know. They escorted me out and threatened to deport me from Cuba.

In the cities, the people live in squalor. The communal apartments are literally falling apart as they have not been properly maintained since 1959. In many of the old high rises that I visited, elevators and indoor plumbing were gone. They were surrounded by primitive outhouses. Under socialism, the government, with help from Moscow, built Soviet-style pre-fabricated housing units known as “Khruscheba” – Khrushchev’s slums which looks like slabs of concrete with windows - lifeless grey barracks similar to the visual pollution that we see in all ex-socialist countries, from Russia to Kazakhstan or the Czech Republic. The number of people who live in these complexes in Cuba far exceed the number of comrades squeezed into similar buildings in the USSR. There were about 10 to 12 people living in a small studio apartment, including small children and old, very frail looking seniors. The stench was excruciating. 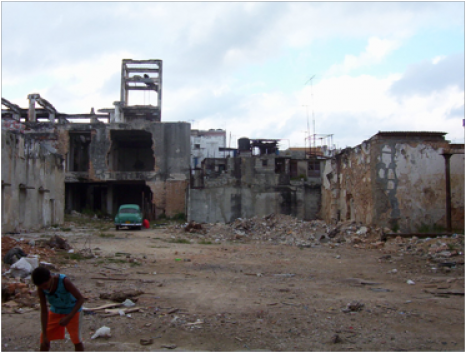 The countryside looked as devastating as in the Soviet Union – dilapidated pre-revolutionary houses; rusting agricultural equipment left from the “oppressive” days of the Batista regime; the people, as in Malawi, traveling on foot (often barefoot) or in a hot, crowded “Camel” trailer bus towed by a conventional truck. As in Malawi, they have to endure frequent police checkpoints.  The only successful part of the Cuban economy—the tourism sector—is off limits to ordinary Cubans.

Fidel Castro and his Communist Party cronies trumpeted that everyone in Cuba would have free health services, and that the system would eliminate “waste” stemming from “unnecessary duplication and parallelism”; i.e. market competition. Communist Party officials and their intellectual servants, however, found it expedient to exempt themselves from the egalitarian medical system that they created and controlled for the gray masses, and provided themselves with an elite medical system to go along with their elite social positions. While ordinary Cuban “workers and peasants” in their masters’ eyes, died in state run hospitals, equipment and medicine that could have saved their lives was in the elite facilities, out of the reach of ordinary Cubans[4].

The clinics for Cuban elites and foreigners are pristine and well equipped as portrayed in the infamous propaganda video, “Sicko”, concocted by Castro-maniac Michael Moore in 2007. I did not get to visit a clinic or hospital for use by the ordinary Cuban people, but my Cuban friend told me that the so-called “excellent” health care system has vast room for improvement if it only had real doctors, medicines, clinics and ambulances.

The “ambulance” for the masses 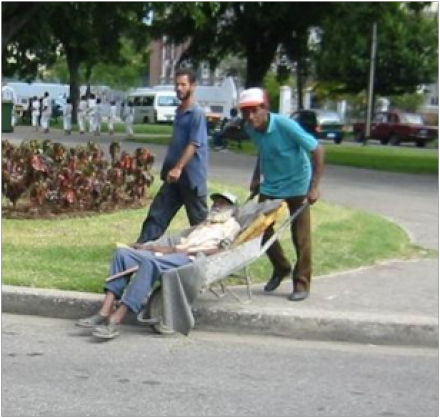 To enforce socialist slavery, hundreds of thousands of people were murdered and millions of others squeezed out. There are 4 million Cubans living outside of Cuba. The estimated number of Cubans killed ranges from 35,000 to 141,000 (1959-1987) according to renowned demographer R. J. Rummel. More estimates of death tolls are listed below:

Non-Combat Victims of the Castro Regime

My Polish friend, Krzysztof Ostaszewski, came to the right conclusion, one that I wholeheartedly share: “Socialist policies are often proclaimed by their proponents to be well-intentioned, but producing unintended consequences. Given nearly two hundred years of vast experience with those policies, and their unqualified and undisturbed record of producing slaughter, misery and poverty, isn't it time to conclude that the "unintended" consequences are actually fully intended by socialism's proponents?”

* Yuri N. Maltsev is a Professor of Economics at Carthage College in Wisconsin. He held various government and research positions in Moscow, Russia. Before defecting to the U.S. in 1989, he was a member of a senior economics team that worked on President Gorbachev's reforms package of perestroika. Before settling in the Midwest, he was a Senior Fellow at the United States Institute of Peace in Washington, DC. a US federal research agency. His work involved briefing members of Congress and senior officials at the executive branch on issues of national security and foreign economic and military assessment. He also testified before the U.S. Congress and appeared on CNN, PBS NewsHour, C-Span, CBC and other American, Canadian, Spanish, South African and Finnish television and radio programs. He has authored and coauthored fifteen books and over a hundred articles. He is a recipient of the Luminary Award of the Free Market Foundation.

[3]  "Cuba is a country where everything was rationed and controlled except the naming of your children… The state would tell you what you would study and where, and creating names was a way of rebelling. Jaime Suchlicki, a Cuba expert at the University of Miami, says many middle-aged Cubans spent their youth fighting Fidel Castro's proxy wars in Ethiopia and Angola and may have given their kids African-sounding names in tribute to the continent. Similarly, the preponderance of names starting with the letter Y may reflect the contact Cubans had with Russian advisers sporting names like Yuri and Yevgeny in the years when the Soviet Union was bankrolling Castro's revolution. WHY CUBANS HAVE SUCH UNUSUAL NAMES, NEWSWEEK, 8/8/08.

[4] Look at pictures at www.therealcuba.com They are real...