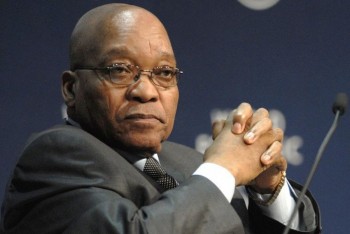 Wits University academic Patrick Bond takes a look at President Jacob Zuma's State of the Nation address and then proceeds to separate fact from fiction. The outcome is a president who makes all the right noises, but fails to deliver in the key areas. This article first appeared in The Conversation.

South African President Jacob Zuma’s state of the nation speech will be followed by Finance Minister Pravin Gordhan’s Budget speech next week on February 22. They represent the country’s two main warring political blocs: patronage versus prudence. But after the “radical economic transformation” rhetoric was ratcheted up by the president, both men may soon stumble on a terrain potholed by what a Donald Trump aide approvingly terms “alternative facts”.

Zuma at least did include a belated definition of what he means by radical economic transformation:

fundamental change in the structure, systems, institutions and patterns of ownership, management and control of the economy in favour of all South Africans, especially the poor, the majority of whom are African and female.

Given Zuma’s distortions of reality, though, might this simply degenerate into another episode of talk left, walk right?

Zuma’s hope is for a “Team South Africa” harmony model to emerge. He said:

Our labour market environment is also showing signs of stability, due to cooperation by social partners.

But workers are angry. The World Economic Forum’s 2016-17 Global Competitiveness Survey ranked South Africa’s “cooperation in labour-employee relations” worst anywhere in the world for the fourth straight year, with a rating that continues to sink.

And last year PricewaterhouseCooper ranked South African corporations as the world’s most engaged in “economic crime” (at 69%, well ahead of the French and Kenyans).

Zuma hopes for a different reality:

Unity in action was also demonstrated again this week with the conclusion of the agreement on the National Minimum Wage and on measures to stabilise labour relations.

But the country’s largest trade union federation, the Congress of South African Trade Unions refused to support the deal until minimum working hours and inflation adjustments are agreed. Labour also emphasises that the state’s attempt to impose a ballot prior to strikes will be opposed intensely.

What might Zuma do to reverse the recent increase in unemployment to more than 27%?

Government runs effective poverty alleviation programmes such as the Expanded Public Works Programme [which] has since 2014 created more than two million work opportunities.

Even if there were actually 2.5 million such “opportunities” from 2014-16, they lasted only three months and amounted to only a fifth of the target set by in the National Development Plan. The work pays just R84/day, half the R20/hour agreed as per the new minimum wage. And R20/hour still leaves a family of four below the poverty line.

Some of the president’s comments about housing and services were also fantasies.

Government… provided more than four million houses since 1994 … To date nearly seven million households have been connected to the grid and now have electricity.

In fact, Africa Check found that three (not four) million houses were produced in this period, although it pointed out that no formal audit has yet been done. Many require rebuilding due to structural defects.

As for electricity, Zuma argued that:

Eskom’s build and maintenance programmes helped ensure stability and an end to load-shedding.

He neglected to mention the 14% crash in electricity demand led by mining and smelting firms. Power cuts ceased after the mid-2015 commodity price crash and the massive dumping of Chinese steel shuttered mines and smelters.

And true, millions of houses were indeed connected to the electricity grid since the early 1990s, but then how many millions were also disconnected due to inability to pay, especially after the 300% price hike since 2008? Last month, 34 municipalities faced disconnection by state utility Eskom due to arrears exceeding R10 billion.

The same problem occurred in 2014 when Zuma bragged that 95% of South Africans had clean water access, yet the next day, the main Water Department spokesperson admitted it was only 65% due to disconnections and breakdowns.

When it came to water this year he avoided that inconvenient fact, and instead Zuma claimed:

Government is working hard to ensure reliable bulk water supply in the various areas of the country to support economic growth whilst increasing access to vulnerable and rural municipalities.

For more than a year the national Department of Water and Sanitation has been heading into bankruptcy. Treasury is considering a formal administrative takeover and Public Protector Busisiwe Mkhwebane and the police Special Investigating Unit are conducting enquiries into corruption.

Zuma was on perhaps shakiest ground with this prediction:

We will continue to partner with the United States and work together on issues of mutual interest such as the full renewal of the African Growth and Opportunity Act.

The two-word corrective to this fantasy is Donald Trump.

False, there were several downgrades in 2016. And although last December, Standard & Poor’s did not push the sovereign rating all the way to “junk” status, it came very close when lowering the country’s long-term local currency rating on South Africa to “BBB”.

As for the supposed “decision to establish the BRICS Rating Agency” by the Brazil-Russia-India-China-South Africa leaders in Goa last September, Zuma should have observed that the commitment was merely to “explore the possibility of setting up an independent BRICS Rating Agency based on market-oriented principles”. This could well replicate a half-dozen prior failed attempts to set up an alternative rating agency.

A different narrative will enter the theatre, stage right, on February 22 when Gordhan delivers the budget speech. Given the adverse balance of forces – the finance minister is fending off attacks from Zuma’s allies, a downgrade by Standard & Poor’s still looms large, and pressure is rising from diverse leftist groups such as #FeesMustFall, trade unions and service delivery protesters – Treasury staff are hardly likely to radically transform anything.

Zuma’s most sobering thought from the state of the nation address should be the last word here, because it’s a sentiment that sounds dangerously ultra-leftist – but at least not alternative-facty, unlike so much else of what he claimed in his speech.

Oliver Tambo [president of the ANC from 1967 to 1991] said, ‘It is inconceivable for liberation to have meaning without a return of the wealth of the country to the people as a whole. To allow the existing economic forces to retain their interests intact is to feed the roots of racial supremacy and exploitation, and does not represent even the shadow of liberation.’