Remember those power outages? Turns out they weren't necessary after all

Eskom’s claim that electricity tariffs are too low is hardly credible, says an uncensored report into the mess at the power utility. Among the problems it uncovered is that too many in management seemed far more focused on leveraging Eskom’s vast buying power for their self-interest, rather than to drive efficiencies, according to this investigation by Financial Mail.

Eskom this week decided it would not release a long-awaited report into the parlous state of the power utility after all. This was a major U-turn after it had earlier invited the media, promising to release the two-year-old report that would reveal the root cause of its operational and financial meltdown in 2015, as well as shed light on the inordinate delays and cost overruns at its new power stations.

Instead, on Tuesday chairman Ben Ngubane (pictured above) said the board had received “legal advice” to the effect that the report must be released only to those who had requested access to it, in terms of the Promotion of Access to Information Act.

However, the Financial Mail has seen three different iterations of the final report, compiled by law firm Dentons, and has been briefed on an earlier interim report. Given the damning findings, it’s evident why the Eskom board were keen to keep it under wraps — until leaks from within made it impossible to maintain the cover-up.

The story is this: In May 2015 Dentons presented an interim report to the board, which was explosive, according to those who saw it. It contained, for example, awkward details about how certain Eskom executives and senior managers allegedly diverted contracts to themselves or their families, to the ultimate cost of the taxpayer.

Eskom then insisted that subsequent versions of the report omit details of implicated individuals. In the end, Eskom terminated the probe early, and locked the final report in the chairman’s vault.

Rot starts at the top

For the first time on Tuesday, Ngubane acknowledged the probe had been stopped in its tracks. Asked why, he spoke of a “trade-off between continuing with a prolonged investigation” and getting on with fixing things.

Continuing with the probe would demoralise staff in an already depressed company, and the board chose to implement recommendations from previous probes. Eskom was also running out of money to pay its 49,000 employees. So it informed public enterprises minister Lynne Brown and cancelled the probe in June.

The reports seen by the Financial Mail paint a picture of a company in serious trouble, with the rot starting right at the top. They also cast serious doubt on the arguments Eskom advanced publicly for why it had to raise electricity prices so steeply.

Dentons reported that Eskom employees told investigators how directors and senior executives had, in some cases, positioned themselves to benefit personally from coal deals — a key part of the operation — entered into on behalf of Eskom. It was the same story in its logistics division, where Eskom did not introduce competitive tendering processes for the delivery of coal to its power stations. In some cases, this meant the delivery of coal ended up costing about half the price of the coal itself. In one case, a company sold Eskom R4.2m worth of coal, but the cost to transport it from a nearby mine was another R2.6m. Another R5m was added to the bill as a “coal penalty adjustment”. The bottom line: Eskom paid R13.4m, including Vat, for just R4.2m worth of coal.

This, Dentons says, did not support Eskom management’s argument that it contained costs each time it asked for higher electricity tariffs. 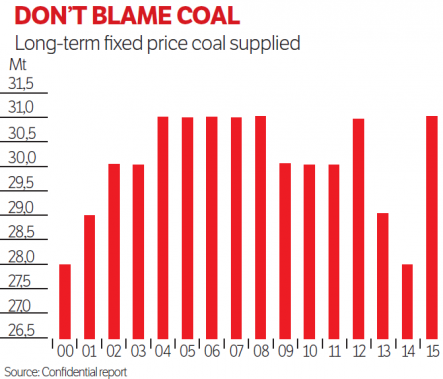 “Moreover, various officers have provided to us verbally examples of senior executives seeking opportunities ostensibly for the benefit of themselves at the expense of Eskom; denying Eskom a path to vertical integration of key suppliers, making deals with suppliers outside of the formal procurement process, and/or turning a blind eye to expensive contract breaches,” an early, less sanitised version of the report states.

The Dentons report also raises new questions over Eskom’s rationale for load-shedding. Dentons said there had been no significant increase in electricity demand for five years from 2008.

Yet it was during this period that the country was subjected to daily load-shedding that cost the economy billions of rand — R438m/day, according to Ngubane.

Investigators questioned why this was so, given Eskom’s considerable buying power which should have allowed it to secure low prices. “In nominal rand terms, coal prices have remained the same for the past four years. More recently (since November 2013) prices have declined from R855/t to R720/t.”

The problem was Eskom’s failure to subject the logistics to a competitive tendering process. Also, corruption: management diverting opportunities to themselves at the expense of Eskom and the consumer.

Dentons’ killer punch, diplomatically delivered, was this line, in one of its earlier reports: “If management’s energies are centred on leveraging Eskom’s considerable buying power for self-interest, rather than to drive efficiencies, the notion that the tariff is not cost-effective loses credibility.” 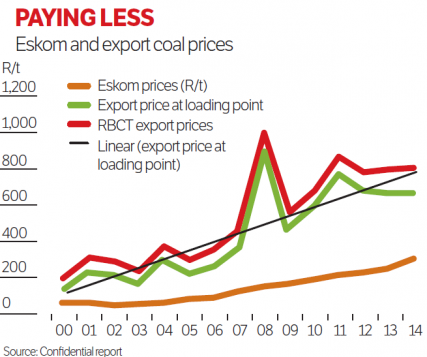 In the final “official” version, this part has been watered down to refer vaguely to a need to check whether there are any conflicts of interest with management.

But in earlier versions, it was more direct. “There is a significant list of examples of questionable procurements, and poor contract management, even including areas that should be in the spotlight, such as ad hoc arrangements with suppliers of diesel not subjected to discounts despite the purchasing power Eskom has,” Dentons said.

The law firm is assiduous in all versions of the report to place on record that it was prevented from finalising its probe, which was cut off after 45 days, despite Eskom board minutes acknowledging at the outset that the probe could take up to 12 months.

'If made public, Eskom would again be leaderless'

Still, it seems Dentons reached a finding that there was evidence of illegal behaviour — one reason why Eskom might want the report buried.

“There would appear to be prima facie indicators based on the above that Eskom breached the treasury regulations pursuant to the Public Finance Management Act, 1999, and therefore contributed to its own financial challenges,” it said.