If you're a Kuga owner, take on the finance companies rather than Ford 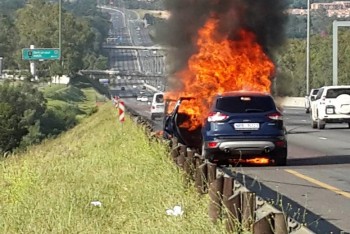 The story of the self-immolating Kuga - close to 50 of which have now burst into flames in SA - has become a PR nightmare for Ford, and a matter of huge concern for Kuga owners, several of whom are reportedly planning a class action against the company. Leonard Benjamin, a lawyer dealing with consumer law, argues that this could be self-defeating. First, you have to apply to the court to be recognised as a class, then begins the long and agonising process of litigating. A far better solution is to hand back the car to the financing house, stop paying the instalments, wait for the financing house to sue, and then bring a counter-claim under common law.


For the many Kuga owners who simply wanted Ford to take back their defective vehicles and refund them everything they have paid, the recall announced by Ford was a slap in the face. However, it seemed that there was very little they could do about Ford’s “take it or leave it” attitude.

For those who decided to accept the recall because they did not seem to have any other option, the nagging doubt remains that the actual problem has not been identified by Ford and that the vehicle remains unsafe to drive. This concern seems to be shared by the car-buying public as the resale and trade values of Kugas have plunged drastically, (some experts in the industry reckon by as much as 40%).

Selling the vehicle to get rid of the problem is, therefore, not an option as the owner is likely to receive only a derisory amount for it. If the vehicle is the subject of a financing agreement, it is unlikely that the sale price will be enough to settle the financing company, leaving the owner with a shortfall to pay. Stuck with the vehicle the only options are to drive it…and hope for the best, or park it in the garage.

Perhaps, it is not a surprise that some Kuga drivers have rejected Ford’s recall and have decided to continue pressing Ford to do the honourable thing and to take back the vehicle and give them a full refund.  Up to now their alternatives have seemed to be equally hopeless.

Considering that Ford does not seem to be overly concerned with the prospect of further adverse publicity, this will not work. The National Credit Regulator has agreed with the recall and it is unlikely that it will intervene again.

A group of about 30 owners are considering a class action against Ford.  However, there difficulties in suing Ford in a class action. Unfortunately, they all seem to favour Ford. Apart from the legal cost involved, there is a question of the delay in getting the matter to court. Most consumers can ill-afford a protracted delay. They will be stuck with a car that they cannot use (and shouldn’t be driving) while they are litigating. If the vehicle is financed they will need to continue paying the instalments to the finance company, without having the use of the vehicle. This means that they probably will not be able to afford a new car.

A class action has the advantage of reducing the legal costs because all the members of the class will contribute but, in order to get to the stage of issuing summons, the consumers will first have to persuade a court that the central issues are so alike that all the matters should be heard together. Although here it seems to be self-evident, it is by no means a foregone conclusion and lawyers representing the consumers must really know what they are doing. (Look at the unsuccessful attempt to have the so-called R699.00 scheme certified as a class action.)

If the consumers get past this, not inconsiderable, hurdle they have to present a legally-complex case to the court.They are suing Ford as the manufacturer of the vehicle. This may mean enforcing a warranty. However, warranties are limited in scope (e.g. 3 years/100,000km) and may have fallen away.

If the warranty is still applicable, the claim will depend on the particular terms of the warranty. The warranty may well give Ford the right to repair the vehicle, instead of replacing it, or refunding payments.

If the warranty no longer applies, consumers will have to base their claim against Ford on product liability, in which case it would have to be a damages claim that is not an easy claim to quantify. The consumers will try to recover everything paid in respect of the vehicle, including insurance and instalments paid to the financing house, but not everything may be recoverable as damages.

While the case against Ford is in progress, the consumer will have to keep on paying the finance company and insuring the car, even if they are not driving it. To avoid this financial drain, the consumer may try to sell the vehicle, but will have to disclose that the vehicle has a defect. They are likely to receive very little for the vehicle.

Alternatively, while the litigation is in progress, the consumer could exercise their rights in terms of Section 127 of the National Credit Act (NCA) and voluntarily surrender the car. As in the case of a sale, they are likely to get very little for the car and will probably be left with a considerable shortfall still owing to the financing company, which they will then need to settle.

If they are finally successful in their claim, they will only get interest from the date of judgment.

There is a far better way of dealing with this matter which avoids many of these pitfalls and is 100% legal. It allows the owner to walk away from the deal and to get back everything they have paid.

All it requires is for the consumer to make a bold decision to cancel the financing agreement, return the vehicle to the financing company and stop paying instalments. Significantly, by doing this the owner will be able to pay for another vehicle.

Whilst completely legal, this solution is so simple that it seems to be too good to be true and there may be some who are sceptical and concerned that they are exposing themselves to the financing company taking legal action against them.

For instance, there are concerns that the financing company may blacklist the consumer, which will prevent them from accessing finance with which to buy a new vehicle. However, it would be illegal to blacklist a consumer who has enforced their legal rights by cancelling the agreement and any blacklisting can be successfully challenged by complaining to the Credit Ombud.

However, it is naïve to believe that keeping possession of the vehicle will in any way influence the financing company. As long as the consumer is paying instalments to the finance company it does not care.

What is important is that once the consumer cancels the agreement and stops paying instalments, the consumer must return the vehicle to the finance company, since only then will the right to a refund of instalments arise.

As soon as the vehicle has been returned the finance company will be acting unlawfully if it does not pay back all the instalments it has been paid by the consumer and it can be sued. An action for a refund of the instalments is a far clearer basis for the consumer to approach a court than trying to initiate the class action.

There is also a real concern that the financing company will react to the non-payment of instalments by instituting legal proceedings to enforce the credit agreement. This would require it to prove that the cancellation had no legal basis. Based on the law and the circumstances surrounding the Kuga, it is extremely doubtful it will succeed. If one can say anything good about the finance companies is that they are miserly with their finances and they are not going to waste money pursuing unwinnable cases.

One should always remember that during the time that any dispute is winding its way through the courts, the consumer would have had an opportunity, and the means, to buy a new vehicle.

All that is required is for the consumer to make a firm decision to stop paying for an unwanted motor vehicle and to return it to the financing company. Considering just how unfairly consumers have been treated in this matter this should really not be a difficult decision to make.