The Joburg township where outlaws make the rules 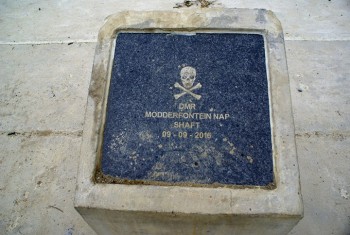 Thousands of illegal miners descend each morning into the bowels of the old Modder B mine to the east of Joburg. This is outlaw country, where guns and knives are the arbiters of petty squabbles. You can hire a hitman for a few thousand rand. The centre of this activity is Lindelane, which is - literally - the garbage can of Joburg.

It’s dangerous, often fatal, but illegal underground gold mining is pretty much all that sustains the economy of Lindelane, a sprawling township of tin shacks and shebeens near Benoni, to the east of Johannesburg. Try as they might, the police are powerless to combat an industry that government, mining houses and trade unions want stamped out.

In Lindelane, and neighbouring Kingsway, each morning thousands of young men squeeze through tiny openings into abandoned underground mines, armed with chisels, hammers and battery-powered torches. Underneath Johannesburg, from Springs in the east to Roodepoort in the west, a network of disused mine tunnels probably several thousand kilometres in length stands as a monument to the city’s former glory years as the gold centre of the world. The golden years are gone, leaving a rabbit warren of subterranean passages now occupied by these men and the gangs to which they owe fealty.

The police occasionally confiscate a sack of rock and some equipment, but in truth the war on illegal miners has been lost. These men make their own rules. A police detective tells of one gang holding another hostage underground and making off with a haul of ore. Not once, but frequently.

The mining houses abandoned these operations and blocked off disused shafts when they were no longer profitable. But for the artisanal miners of Lindelane, these discarded tunnels are sources of cash. Economic anarchy reigns here: there are no government agents asking for mining licences, no trade unions campaigning for shorter hours and tea breaks, no safety officer issuing hard hats to those brave and desperate enough to burrow below the surface. Once you enter this underworld, you know the risks.

Local police from Benoni and surrounding areas are responsible for keeping a watching eye on these illegal miners, or zama-zamas (“those who give it a go”) as they are also known. Most of the young miners descend when the police are not looking and surface again at 6pm when the police change shifts.

This little window of freedom allows them to dodge the law and make off with their daily haul of gold-bearing ore, heading straight for one of the hundreds of illegal refineries operating in the township, mostly in backyards. The rocks are crushed and washed through small hand-operated mills to separate the gold from the rock. The ore is washed down a sluice, and gravity does the rest. Gold, being heavier than the surrounding crushed rock, settles on mats strategically placed on the sluice, while the lighter waste material is washed away.

On a good day, Thabo (not his real name) will end up with a gram of gold, netting himself about R300 from one of the many underground gold dealers that operate on the East Rand. But most days, he squeezes just a tenth of a gram from the 15kg or 20kg of rock he chisels from the bowels of the old Modder B mine, almost directly underneath the Benoni prison. His average take for a day’s work is between R100 and R150. Some illegal miners earn substantially more.

The police do what they can to snuff out illegal mining, but they recognise it is a hopeless task. There are hundreds of openings to the abandoned underground mines of Johannesburg. Close one down, and the miners simply move to another.

“For these people, this is their only way to feed themselves,” says one police officer. “These are people who have never been to Sandton or the nicer suburbs of Johannesburg. These are the poorest of the poor.”

Most South Africans would be hard pressed to find Lindelane on a map, but it has one of the highest crime rates in Johannesburg. Weekends are particularly brutal, with assault and murder the cause of most police call-outs. On a Friday, the shebeens are pumping and the miners are out for a good time. That’s when the trouble starts. Knives and guns are the arbiters of petty squabbles. For a few thousand rand you can hire a hitman to get someone knocked off, say the police. This is a corner of Joburg most people hear about but never visit.

Last Friday a man identified as Tsiu Magasane from Lesotho was shot dead at Shaft 13 in Benoni Mine on the East Rand when a group of men in a bakkie purporting to be mine security approached a group of illegal miners and started firing indiscriminately. A murder case has been opened at Benoni Police Station. One detective involved in the case says the killers were probably from a rival gang.

Groundup spoke to several illegal miners, none of whom wanted to give their names or be photographed for fear they would be targeted by the police. Everyone knows each other here, and they’re suspicious of outsiders. It has to be that way to stay ahead of the law. One young miner said he had just emerged after a three day marathon underground with 10 grams of gold as his prize. One gram of gold is worth about R513 at current market prices (depending on the carat), but the miners will receive about R300 after the gold buyer takes his cut. Some miners stay weeks and even months underground before resurfacing. A township supply chain ensures they receive food, torch batteries and other basic necessities while underground.

Underground mines are dangerous and inhospitable places at the best of times. Mining houses spend hundreds of millions of rands on underground cooling and water pumping systems, not to mention the reinforcement of mined-out cavities to stop them collapsing. None of this happens in illegal mines. These disused mines are seething with toxic dust and gases, roof collapses are common, and life expectancy is low.

A police officer tells of one young miner who was a witness in a criminal case. Not yet in his thirties, he had a severe bronchial condition from inhaling toxic fumes and stale underground air. He was dead before he was due to appear in court.

In 2009, at least 82 illegal miners were reportedly killed from inhaling poisonous gases in Harmony mine in the Free State. The difference here is that Harmony is a functioning mine with all the infrastructure and safety protections required of a modern mining outfit, though the deaths occurred in an underground section that had been closed by management. Still, up to 3,000 illegal miners (“criminals”, according to Harmony management) somehow managed to infiltrate and work in an abandoned part of the mine with the help of Harmony employees.

Just a few days before this tragedy, another five dead bodies were hauled to the surface at Harmony. In 2007, another 25 bodies were recovered following a fire. In Lindelane, one detective responsible for policing illegal mining says it is not uncommon for miners to stumble across human skeletons underground. These nameless casualties of rockfalls or fires will remain forever buried beneath the soil of Modder B, without so much as a tombstone to commemorate their brief lives.

Thabo’s crude gold refinery, like most in Lindelane, is well hidden from the police. At the front of his small shack, his wife recycles plastic and glass, for which she earns a few hundred rand a week.

Lindelane is the garbage can of Joburg. It’s how many people make a living here: recycling other people’s discards, whether gold, plastic or glass. The spaza shops are run by Ethiopians and Pakistanis who lock up their containers at 6pm each night and retire for the night to the safety of the steel boxes they call home. There is no electricity here, only the occasional generator. For Lindelane residents, their ladder of aspiration reaches across the R51 to Kingsway, where RDP houses and Eskom power lines mark the boundary between the poor and the desperate. Just outside the outer perimeter of Kingsway, in the shadow of the East Rand gold dumps, you can hear the hammering of artisanal miners crushing rock from the day’s underground harvest. Most of them have lookouts to warn them when police are approaching. I catch one group off guard – a white guy with a camera, what the hell? They settle down when they realise I am not the police. The rain starts belting down, and they continue working. The day is not over yet. There are groceries to buy and no-one wants to leave their gold unattended through the night.

These miners, like their counterparts on the other side of the highway in Lindelane, wait for the police to turn away before making their descent. Some will return later that evening. Some will remain underground for days. To do this job you must be young and strong. When they get too old for this work, they will stay above ground and run the refineries. Or deal in gold. Or something.

If you’re from Lindelane, you may have heard of Sandton, Fourways and the rich suburbs of Johannesburg. But they may as well be in China because you’ll likely never go there.

This article first appeared in Groundup.