Call for inquiry into state capture by corporations - is this Zuma's payback for Zuptagate? 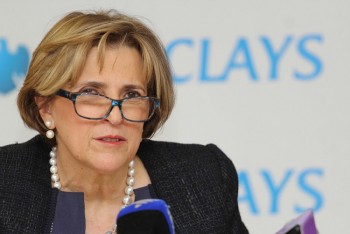 One of the targets of those calling for a public inquiry into the looting of state resources by apartheid-era monopoly capitalism is oligarch Johann Rupert, who last year called for Zuma to go. This is payback time. There is a long story behind this episode, going back more than 20 years when Sanlam-owned Bankorp (now part of Absa) received an illicit bail-out, funded ultimately by taxpayers, says Business Day. CEO of Barclays Absa, Maria Ramos (pictured), would no doubt this matter rather remained buried. It is certainly worth re-opening this saga, but an inquiry would be pointless if it didn't also look into repeated allegations of bank-capture of the court system.


While the Bankorp scandal dates back to the early ’90s, there could not have been a more fraught moment than right now for this skeleton to be dragged out of the cupboard.

The key protagonists in the drama – Trevor Manuel, Tito Mboweni, Maria Ramos, Thabo Mbeki — in positions of government authority at the time, are those who now stand accused by President Jacob Zuma’s backers of having banded together to protect white monopoly capitalism and its crooked apartheid beneficiaries.

Also implicated is the Rupert family — shareholders of Sanlam, which was Bankorp’s chief shareholder at the time the "lifeboat" was given.

An array of political groupings from the Gupta family and Oakbay executives, to Andile Mngxitama’s Black Land First and the "paid-Twitter" Zuma acolytes have in recent months energetically popularised the CIEX report on social media that urged the government to recover, among other apartheid debts, the Bankorp "lifeboat" from the company into which it was amalgamated, Absa.

As Ramos and Manuel were in the Treasury at the time and Johann Rupert was associated with Sanlam, the CIEX report also feeds into the bogus intelligence report Operation SpiderWeb a year or so ago that alleged a grand conspiracy between the Treasury and the Ruperts, to capture the economy.

More recently, the ANC Women’s League, Zuma’s storm troopers, have also joined the clamour and, in a statement on Saturday, called for Zuma to implement the recommendation in the public protector’s draft report into the CIEX report "for a commission of inquiry into the looting of state resources by the apartheid government and Capture of State-owned entities".

The proposed commission, the first action by the newly installed public protector, Busisiwe Mkhwebane, is a mirror image her predecessor Thuli Madonsela’s recommendation in the State of Capture report for a commission of inquiry into state capture during the Zuma presidency.

While the resuscitation of the Bankorp "lifeboat" stories adds genuine complexity to the debate on state capture by political cronies, it is also, at the same time, the perfect rejoinder to Madonsela’s last blow to Zuma as public protector.

It is common cause that the assistance to Bankorp by the South African Reserve Bank was illicit and unethical.

Four investigations — the CIEX report; the investigation requested by president Mbeki and conducted by Judge Willem Heath; the Bank’s investigation by an expert panel headed by Judge Dennis Davis and the public protector investigation — all agree the bailout broke the law and amounted to free money from the Bank, provided in a secretive and non-transparent manner, to the benefit of Bankorp shareholders.

There is also every reason to assume that the personal relationships and close associations between individuals in Bankorp and the regulatory authorities at the time – cronyism – were at the heart of the secretive "lifeboat" in the first place.

Mkhwebane’s report is not only about whether there was something wrong with the Bankorp lifeboat. It is also about what the government — Mbeki, Manuel and Mboweni — should have done about it and this is where things get controversial.

The CIEX report has a deeply dubious origin. Former British intelligence operative-turned-bounty hunter Michael Oatley came to know about the Bankorp saga while attempting to recover British investors’s assets in another of SA’s great corporate thefts — the collapse of Tollgate. Recognising the opportunity, in 1997 Oatley approached SA’s then-spy chief Billy Masetlha and the two signed a contract for the recovery of monies plundered under apartheid, for which Oatley would be well paid and would receive a 10% commission of what was recovered.

On being presented with Oatley’s report a year or so later, the ANC’s top economic team — finance minister Manuel, the soon-to-be-appointed Bank governor Mboweni and a third cabinet minister, Alec Erwin — were appalled. Mboweni and Manuel say in their interviews with the public protector (Madonsela) in 2016 they had decided with Mbeki that Oatley was not to be trusted.

Said Mboweni in an interview with the Business Day on Saturday: "The problem was that this bounty hunter was telling us to take the report and implement it. But we agreed at a meeting among ourselves that we should rather use the institutions of the country to investigate what had happened."

The result was that Mbeki appointed Heath and Mboweni, when he became Bank governor, appointed Davis to conduct official independent investigations. Both found the "lifeboat" illicit; but both had their own reasons for why it would be difficult to recover the money.

For Heath, such a move would cause systemic risk to the banking system.

In an interview, also on Saturday, Manuel said the systemic risk argument was at the time a plausible one.

"It is difficult to look at the past through the prism of the present. When we started out [in government] the Reserve Bank had a net open forward position of $24bn…. In 1997 it raised interest rates eight times by 100 basis points. The context was very important," he said.

Her report lambastes the government for failing to consider officially — for example, in the Cabinet — a report by a private and self-interested individual. It also refers frequently to the government’s failure to "process" and "implement" the report, when it is self-evident that the document lacked official status. This is the great puzzle of Mkhwebane’s report.