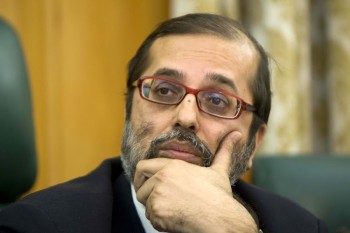 President Zuma has delayed signing off on the Financial Intelligence Centre Amendment Bill which South Africa is committed to enforcing in terms of its international obligations. It allows for warrantless searches in certain instances and would make it more difficult for corrupt officials to operate in the dark. The president believes aspects of the bill are unconstitutional. Chairman of the standing committee on finance, Yunus Carrim, says the committee will take its own legal advice on the matter and then let the Constitutional Court decide, according to Business Day.


Parliament is not going to "tremble and buckle" in the face of the Presidency’s view that the Financial Intelligence Centre Amendment Bill is unconstitutional, says the chairman of the standing committee on finance, Yunus Carrim (pictured above).

His firm stance outlined on Tuesday comes ahead of a briefing by the Treasury to the committee on Wednesday about President Jacob Zuma’s referral of the bill back to Parliament last week after a much criticised delay of about five months.

The delay in promulgating the legislation means SA will not meet the February deadline set by the intergovernmental Financial Action Task Force to introduce tighter monitoring of financial transactions, posing a danger that SA will be put on a watch list.

The bill will impose more onerous obligations on banks to know their clients and, in particular, politically influential persons such as politicians, government officials and directors of companies contracting with the government.

Amendments to the Financial Intelligence Centre Act (Fica) are necessary for SA to meet its international obligations to the French-based task force, which works to combat money laundering and terrorist financing.

The referral of the bill back to Parliament was based on the view of the Presidency’s legal advisers that the provision for warrantless searches was unconstitutional as it was too broad and contravened citizens’ constitutional right to privacy.

Carrim said during a debate in the National Assembly on the Financial Sector Regulation Bill that the committee would seek its own, independent legal advice. "It does not mean that just because it comes from the Presidency’s lawyers therefore that Parliament must tremble and buckle. No, we are not going to do that," he said.

"We are going to get independent legal advice and if the Presidency’s lawyers are wrong, they are just wrong — and finally let the Constitutional Court decide."

Critics of the long delay in Zuma’s decision on the bill claimed that he was trying to protect those benefiting from corruption, such as the Guptas.

The bill limits the circumstances in which warrantless searches can take place, and the Banking Association SA said it was satisfied that the restrictions were sufficient to address constitutional concerns.

Fica and specifically the obligation it imposes on accountable institutions to report suspicious transactions was the mechanism behind the decision by four major banks in SA to terminate their banking relationships with companies owned by the Gupta family.

Parliament goes into recess at the end of this week.

The finance committee will finalise its deliberations on the Financial Intelligence Centre Amendment Bill when it reconvenes late in January.