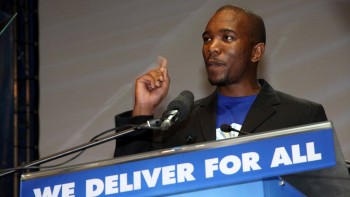 Government's decision to withdraw from the International Criminal Court (ICC) is being challenged by the Democratic Alliance. Burundi has also given notice that it intends pulling out of the Court, as Africans realise they - and only they - are subject to prosecution by the ICC. Perhaps President Zuma and some of his cohorts fear they may some day find themselves in front of the ICC, so what better time to plan their escape than now.

The Democratic Alliance (DA) will on Monday file an urgent application for direct access to the Constitutional Court to challenge the constitutionality of the government’s notice to withdraw SA from the Rome Statute of the International Criminal Court (ICC), reports Business Day.

DA leader Mmusi Maimane said the decision taken by cabinet this week was at odds with SA’s commitment to international justice and human rights. "It marks a dramatic decline in SA’s standing in the international community," he said in a statement.

Furthermore, the DA will say that the notice of withdrawal is procedurally irrational, as it was delivered without any process of consultation with Parliament and the public. The notice of withdrawal was also a breach of the state’s constitutionally enshrined duty to respect, protect, promote and fulfil the rights contained in the Bill of Rights.

"The withdrawal from the ICC is the ultimate betrayal of our historical commitment to a human-rights based foreign policy. The truth is that under Jacob Zuma, SA’s foreign policy is increasingly defined by expediency and rogue behaviour," the DA leader said.

"President Nelson Mandela said SA would never again be the "polecat of the world". But the actions of the ANC now are fast reducing SA’s standing in the global community to that of polecat again. Our indefensible voting record at the United Nations, the intention to withdraw from the ICC, and President Zuma’s laughable intention to start a BRICS ratings agency – are all examples of how this government has reduced our influence and reputation globally.

"SA’s withdrawal from the ICC sends the message that as a country, with global standing, we do not believe in holding those who commit the most horrendous of acts, such as genocide and war crimes, to account. We are now siding with murderers and dictators from across the globe."

Maimane said the effectiveness and shortfalls of the ICC should be debated and SA should work tirelessly to reform it so that it performed its duties without fear, favour or prejudice. However, to withdraw from it entirely undermined global efforts to safeguard the rights of citizens here at home and of the international community.