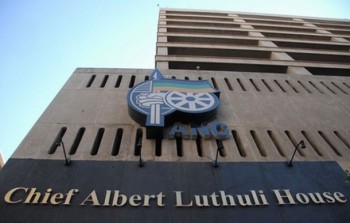 The ANC is at war with itself, as the Occupy Luthuli House protests affirm. After the local government electoral disaster in which the ruling party lost most of SA's big cities to the opposition, the party of liberation should have entered a period of deep soul searching. Instead it has atomised into various factions each seeking ascendancy and retribution, as this editorial from Mail & Guardian points out.

The #OccupyLuthuliHouse group, which protested at the ANC’s headquarters earlier this week, consists of voices from within the ANC who wish to be heard by the party’s leaders. In the past, when such calls went out the ANC would say that critics should air their grievances inside its structures. The party has also said that members should not hang out the ANC’s “dirty laundry” — its internal battles — in public, but rather seek to resolve matters within the organisation.

That would be fair enough if the ANC was a functioning political party that genuinely wanted to connect the rank and file to the leadership, a party that actively sought a mandate from the people rather than simply imposing policy and representation from above. That is what the ANC should be — and, indeed, could claim to have been at points in its past. But the fact that such internal critique has not worked shows that democracy in the party is fundamentally broken.

As shown by the scuffles between protesters and Umkhonto weSizwe Military Veterans Association (MKMVA) veterans at Luthuli House this week, party president Jacob Zuma is using groups in the ANC to fight off other factions, particularly those critical of him. It has come down to those who are willing to say “Zuma must go” versus those who will defend his position at all costs. Everyone else in the party is caught in between.

In the maelstrom this tension has created, the idea of a unified ANC voice has been lost. Whereas previous breaks in party ranks and disagreements among leaders would make front-page headlines, these days it has become par for the course. This is bad news for the party, and is indicative of a movement that is increasingly — and rapidly — losing its way: the centre cannot hold.

There are, however, certain ANC leaders whose voices have stood out as rare instances of sanity.

ANC secretary general Gwede Mantashe decided to accept a memorandum from the #OccupyLuthuliHouse group. It was a move that angered veterans but it was the statesmanlike thing to do: the sort of behaviour that is sorely lacking in the party at the moment.

Party treasurer general Zweli Mkhize also made the right noises while delivering a keynote address at Sanlam’s offices in Sandton, Johannesburg, on Tuesday. He spoke about the party’s need to address discipline in its ranks, its leadership problems and to take stock after its devastating showing in the local government elections.

But theirs have been lonely voices while the battle over state capture and parastatals continued to play out in Parliament this week, where embattled Finance Minister Pravin Gordhan pleaded with the public and the government to put the country’s interests first.

Instead, it seems the interests of one family, the Guptas, and those whose interests are aligned to theirs continue to dominate the governing party’s agenda.

The veterans’ body has said more than once that it has a friendly relationship with the Guptas. It has given no indication that it thinks the powerful family, accused of corrupt dealings with politicians from the president down, has done anything wrong.

In doing so, the MKMVA has revealed itself to be the ground troops of the “Zupta” faction in the ANC, just as mines minister Mosebenzi Zwane revealed himself to be a Gupta advocate by brazenly and falsely claiming this week that the Cabinet had approved the idea of an inquiry into the banks that cut their ties with the Guptas. At least the public is now able to see even more clearly, as with Van Rooyen, which side Zwane is on.

Mantashe, of course, can’t be seen to be on one side or the other — it’s his job to preserve unity in the ANC and prevent members of opposing groups from tearing each other’s throats out, or at least stop them doing it in public. In that, we wish him well but suspect it’s a hopeless task.

There are underlying splits in the party that can no longer be papered over, and open war between ANC members is inevitable.

After the shock the local election results delivered to the ANC, the party should have knuckled down, taken urgent action and reported back to its disillusioned support base about what it would do to win them back. People like Gordhan, Mkhize and even Mantashe know that.

But they are hamstrung by the interest groups that have instead immersed themselves in a horrifying feeding frenzy, if the various dubious deals the treasury is trying to block are anything to go by.

Parts of the ANC are trying to act, but far more buy-in and far more urgent action are needed if the once great liberation movement is to save itself. At this point, however, it looks very unlikely.