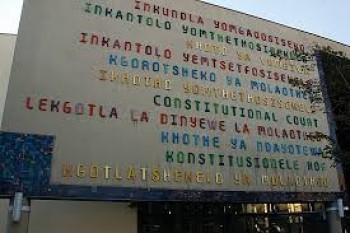 Last week the Constitutional Court declared that the Restitution of Land Rights Amendment Act was invalid, citing lack of public participation prior to its promulgation, according to this report from News 24.


The Constitutional Court has ruled that the Restitution of Land Rights Amendment Act is invalid as of Thursday.

It cited the lack of consultation before it was passed as the reason for its decision.

It was signed into law on July 1, 2014, making new land claims possible.

However, provincial legislatures were given less than two weeks to advertise and hold public hearings, consider oral and written submissions from the public, and provide negotiating and final mandates.

The bill was approved by all but one of the provincial legislatures by the end of March 2014. The National Council of Provinces passed it in the same month.

Claims lodged by the date of the judgment continue to exist. The court however interdicted the Land Claims Commission from considering, processing and settling new claims for 24 months, pending Parliament’s re-enactment of the amendment act or finalisation of those claims filed by 31 December 1998, whichever occurred first.

The right to land restitution plays a pivotal role in South Africa’s constitutional democracy, and is intended to restore the dignity of those affected by the racist practices and laws of the past, the court said.

The legislative processes which resulted in the act becoming law needed to include comprehensive public participation.

Notices were given only a few days prior to the hearings, and hearings were held in certain municipalities excluding many affected individuals. At the hearings themselves, members of the public affected were not afforded an opportunity to share their views.

The case was brought by six groups with an interest in land rights, including the Land Access Movement of SA. The respondents included the NCOP chairperson, National Assembly speaker and all nine provincial legislatures.

The NCOP was ordered to pay the applicants’ costs.