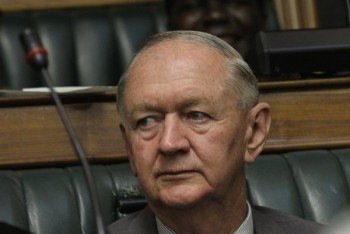 Eddie Cross, the Movement for Democratic Change MP in Zimbabwe, says the country is at a crisis point similar to that of 2008 when the government abandoned the Zimbabwe dollar after inflation peaked at 500 million percent. A quarter of the country's children are orphans and the military is running the ruling party. A free election is now the only route out, argues Cross.

The past sixteen years in Zimbabwe can now be divided into two distinct phases – both 8 years in duration; 2000 to 2008, which we could call the hyper inflationary period and 2009 to 2016 which I would call the fiscal period. At the end of each phase, after years of bad policy and bad politics, we came to a tipping point where leaders of countries with an interest in Zimbabwean affairs decided that they had to intervene.

In 2008, after 8 years of monetary and price control madness, the wholesale printing of money finally led to the near total collapse of the formal economy. All fuel stations were empty, all supermarket shelves bare, everyone was trading in the informal sector and “money burning” had become a massive industry. Inflation finally reached 500 million percent and the Zimbabwe dollar simply collapsed and ceased to be a means of exchange. In the period, perhaps three million people, a third of the population fled the chaos for South Africa.

The tipping point in this period came in 2007 when South Africa decided we could not be left to our own devices and intervened. In a rapid series of actions, Thabo Mbeki, in near total secrecy, persuaded Mr. Mugabe to negotiate with his arch enemies, the MDC and to agree on conditions for a “free and fair” election in March 2008. Then he held meetings with regional leaders; got appointed as the SADC/AU point man, then he met with the G8 leaders where he secured their support, both politically and financially. Finally the election took place, Zanu PF was soundly defeated and then the process fell apart, SADC leaders failed to follow through and after 9 months of messy political activity, a Government of National Unity was formed and took control of the State in early 2009.

A short period of sanity followed. Macroeconomic discipline was imposed and the formal economy recovered, battered and bruised but nothing like the era before 2000. Then, just as in 2005 when Zanu PF engineered a two thirds majority in the House of Assembly, they did it again and MDC was kicked back into opposition. Having taken full control of the State, they lost no time in reasserting their lack of understanding of economic fundamentals. Because we were using the US dollar they could not print money, they started using a thing called “deficit financing”.

Like printing money, it has to be managed vary carefully and with great discipline. But just as they did in the first period of madness, they simply borrowed money from everyone with spare cash and by June 2016, the fiscal deficit (the gap between State revenues and expenditure) had grown to 37 per cent. A sustainable deficit would probably be 5 per cent under normal conditions, 37 per cent is simply crazy.

Having exhausted the borrowing options, failed to secure any rescue package from anyone, they were forced in 2016 to illegally draw on RTGS system resources to fund the deficit. By June this had crippled the banking sector and they have now started appropriating – illegally – the hard currency earnings of the exporters. These events have forced the government to impose harsh import and foreign exchange controls. Private bank accounts have again been drained into the fiscal system and Zimbabweans are now unable to get their money out of their banks.

The first cracks in the system have appeared with Government failing to pay the armed forces this month. Instead they have announced that they will be paid at the end of June and the rest of the Civil Service will be paid by the middle of July. When a client cannot get their money out of a bank on demand, the bank is broke, when a Government cannot pay its staff; they are on the edge of the abyss.

So we are back in 2008 when everything fell apart, regional States intervened and with international help, got a semblance of democracy back and restored some stability and economic and fiscal recovery. The contribution of the G7 States was considerable – perhaps as much as $7 billion in financial aid over the past 8 years. But in reality, little has changed, there is no democratic reform, the military continue to control much of what goes on and virtually run the ruling Party. Human, political, property and other rights are all being abused on a continuous basis.

Economically we are back to square one – we cannot fund our health and education systems, retain our critical skills and meet even the most basic needs of our people. Zimbabweans are poorer than any other people in Africa. A quarter of all our children are orphans, child mortality is the highest in Africa and five million people need food aid. We are not servicing our debt which now stands at $16 billion dollars and growing faster than at any time in our history.

The State has printed a new currency, but is nervous about the introduction of the new currency to the markets where it will immediately be discounted massively by traders and will simply exacerbate all the other problems and pressures. Any attempt to pay the Civil Service and the Armed Forces with this new currency will be met with fierce resistance, even armed insurrection. I cannot see any solutions and believe that a total collapse is now imminent.

Those in the system are fully aware of the situation and are desperately casting around for solutions. Unlike 2008, the Zanu PF Party is completely fractured into at least 4 factions. It cannot be put back together in any sort of semblance of what it has been and no reconciliation is possible. The opposition is no less fractured and comprises over 30 Parties. Who is who in the Zoo can only be determined by an election.

Major figures in the Parties do not want an election because they well know that they could not win an election that is run on the basis of the SADC rules for democratic elections. But I see no alternatives. They are all calling for a “National Government” behind closed doors and want a lengthy period before elections are held. But that will not provide the required political conditions to permit the international Community to support our economic stability and recovery and without international assistance, that is simply not going to take place.

So what could be a possible road map to guide us to into the future?

I think an election – like 2008, is essential. We have to find out just who has the support of the people and therefore the right to govern this poor broken land. Once a democratic Government is in place and is recognised as the legitimate government of Zimbabwe, then we can start to put things back on their feet. It will be a massive task requiring an emergency stabilisation programme to hold things together while we make the required policy changes and adjustments. Then a medium term recovery programme to restart the economy.

Of one thing I am quite satisfied, is that once we have a respected government and put sound policies into effect, the Zimbabwean economy will respond dramatically and rapid recovery and long term growth will be possible. Until then, things are going to be rough, very rough and we must all strap on our life jackets for the white water ahead.