The West is travelling a road to economic ruin 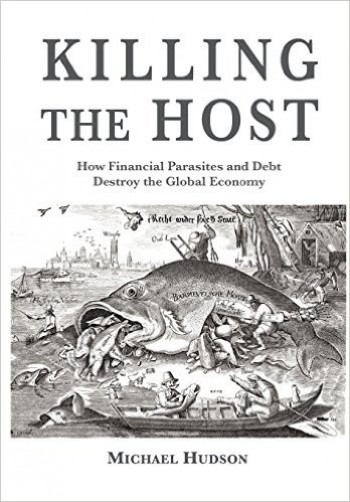 Economist Michael Hudson recently had plenty to say about the Panama Papers. He has a new book out called Killing the Host which explains how US banks set up branches in Panama and Liberia - where income tax rates are zero- as a way to attract criminal drug money to the US rather than Switzerland. And how international corporations can book their earnings in Panama at zero tax, meanwhile the cash is safely stowed in a New York bank. Paul Craig Roberts looks at how Michael Hudson has deciphered the world of international finance, revealing a thinly disguised ruse of global proportions aimed at enriching the 1% at the expense of the 99%.

If you have not heard of Michael Hudson it merely shows the power of the Matrix. Hudson should have won several Nobel prizes in economics, but he will never get one.

Hudson did not intend to be an economist. At the University of Chicago, which had a leading economics faculty, Hudson studied music and cultural history. He went to New York City to work in publishing. He thought he could set out on his own when he was assigned rights to the writings and archives of George Lukacs and Leon Trotsky, but publishing houses were not interested in the work of two Jewish Marxists who had a significant impact on the 20th century.

Friendships connected Hudson to a former economist for General Electric who taught him the flow of funds through the economic system and explained how crises develop when debt outgrows the economy. Hooked, Hudson enrolled in the economics graduate program at NYU and took a job in the financial sector calculating how savings were recycled into new mortgage loans.

Hudson learned more economics from his work experience than from his Ph.D. courses. On Wall Street he learned how bank lending inflates land prices and, thereby, interest payments to the financial sector. The more banks lend, the higher real estate prices rise, thus encouraging more bank lending. As mortgage debt service rises, more of household income and more of the rental value of real estate are paid to the financial sector. When the imbalance becomes too large, the bubble bursts. Despite its importance, the analysis of land rent and property valuation was not part of his Ph.D. studies in economics.

Hudson’s next job was with Chase Manhattan, where he used the export earnings of South American countries to calculate how much debt service the countries could afford to pay to US banks. Hudson learned that just as mortgage lenders regard the rental income from property as a flow of money that can be diverted to interest payments, international banks regard the export earnings of foreign countries as revenues that can be used to pay interest on foreign loans. Hudson learned that the goal of creditors is to capture the entire economic surplus of a country into payments of debt service.

Soon the American creditors and the IMF were lending indebted countries money with which to pay interest. This caused the countries’ foreign debts to rise at compound interest. Hudson predicted that the indebted countries would not be able to pay their debts, an unwelcome prediction that was confirmed when Mexico announced it could not pay. This crisis was resolved with “Brady bonds” named after the US Treasury Secretary, but when the 2008 US mortgage crisis hit, just as Hudson predicted, nothing was done for the American homeowners. If you are not a mega-bank, your problems are not a focus of US economic policy.

Chase Manhattan next had Hudson develop an accounting format to analyze the US oil industry balance of payments. Here Hudson learned another lesson about the difference between official statistics and reality. Using “transfer pricing,” oil companies managed to avoid paying taxes by creating the illusion of zero profits. Oil company affiliates in tax avoidance locations buy oil at low prices from producers. From these flags of convenience locations, which have no tax on profits, the oil was then sold to Western refineries at prices marked up to eliminate profits. The profits were recorded by the oil companies’ affiliates in non-tax jurisdictions. (Tax authorities have cracked down to some extent on the use of transfer pricing to escape taxation.)

Hudson’s next task was to estimate the amount of money from crime going into Switzerland’s secret banking system. In this investigation, his last for Chase, Hudson discovered that under US State Department direction Chase and other large banks had established banks in the Caribbean for the purpose of attracting money into dollar holdings from drug dealers in order to support the dollar (by raising the demand for dollars by criminals) in order to balance or offset Washington’s foreign military outflows of dollars. If dollars flowed out of the US, but demand did not rise to absorb the larger supply of dollars, the dollar’s exchange rate would fall, thus threatenting the basis of US power. By providing offshore banks in which criminals could deposit illicit dollars, the US government supported the dollar’s exchange value.

Hudson discovered that the US balance of payments deficit, a source of pressure on the value of the US dollar, was entirely military in character. The US Treasury and State Department supported the Caribbean safe haven for illegal profits in order to offset the negative impact on the US balance of payments of US military operations abroad. In other words, if criminality can be used in support of the US dollar, the US government is all for criminality.

When it came to the economics of the situation, economic theory had not a clue. Neither trade flows nor direct investments were important in determining exchange rates. What was important was “errors and omissions,” which Hudson discovered was an euphemism for the hot, liquid money of drug dealers and government officials embezzling the export earnings of their countries.

The problem for Americans is that both political parties regard the needs of the American people as a liability and as an obstacle to the profits of the military/security complex, Wall Street and the mega-banks, and Washington’s world hegemony. The government in Washington represents powerful interest groups, not American citizens. This is why the 21st century consists of an attack on the constitutional protections of citizens so that citizens can be moved out of the way of the needs of the Empire and its beneficiaries.

Hudson learned that economic theory is really a device for ripping off the untermenschen. International trade theory concludes that countries can service huge debts simply by lowering domestic wages in order to pay creditors. This is the policy currently being applied to Greece today, and it has been the basis of the IMF’s structural adjustment or austerity programs imposed on debtor countries, essentially a form of looting that turns over national resources to foreign lenders.

Hudson learned that monetary theory concerns itself only with wages and consumer prices, not with the inflation of asset prices such as real estate and stocks. He saw that economic theory serves as a cover for the polarization of the world economy between rich and poor. The promises of globalism are a myth. Even left-wing and Marxist economists think of exploitation in terms of wages and are unaware that the main instrument of exploitation is the financial system’s extraction of value into interest payments.

Economic theory’s neglect of debt as an instrument of exploitation caused Hudson to look into the history of how earlier civilizations handled the build up of debt. His research was so ground-breaking that Harvard University appointed him Research Fellow in Babylonian economic history in the Peabody Museum.

Meanwhile he continued to be sought after by financial firms. He was hired to calculate the number of years that Argentina, Brazil, and Mexico would be able to pay the extremely high interest rates on their bonds. On the basis of Hudson’s work, the Scudder Fund achieved the second highest rate of return in the world in 1990.

Hudson’s investigations into the problems of our time took him through the history of economic thought. He discovered that 18th and 19th century economists understood the disabling power of debt far better than today’s neoliberal economists who essentially neglect it in order to better cater to the interest of the financial sector.

Hudson shows that Western economies have been financialized in a predatory way that sacrifices the public interest to the interests of the financial sector. That is why the economy no longer works for ordinary people. Finance is no longer productive. It has become a parasite on the economy. Hudson tells this story in his recent book, Killing the Host (2015).

Readers often ask me how they can learn economics. My answer is to spend many hours with Hudson’s book. First, read the book through once or twice in order to get an idea of what is covered. Then study it closely section by section. When you understand the book, you will understand economics better than any Nobel prize-winning economist.

Treat this column as an introduction to the book. I will be writing more about it as current events and time permit. As far as I am concerned, many current events cannot be understood independently of Hudson’s explanation of the financialized Western economy. Indeed, as most Russian and Chinese economists are themselves trained in neoliberal economics, these two countries might follow the same downward path as the West.

If you put Hudson’s analysis of financialization together with my analysis of the adverse impact of jobs offshoring, you will understand that the present economic path of the Western world is the road to destruction.